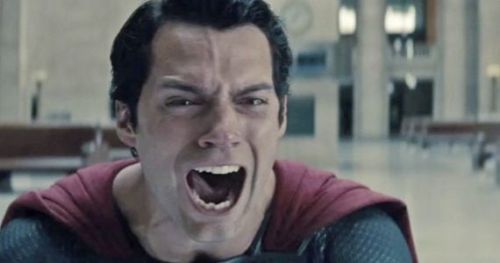 It should be noted that I am a big DC fan. Even after the heavy (and deserved) criticism of the New 52 launch, I still read all the big books regularly, and enjoy a good number of them, even as comic fans have fled their flimsy story lines like affluent folks did the cities (if they come back, does that classify as gentrification?). Having said that, I’ve got plenty of thoughts on how they are shaping their movie universe, which has little to do with comic mythology and more to their method of moving making Part Two and Part Three of the series.

As I wanted to initially speak of why I have such little faith in the DC Comics movie universe moving forward, much of that focuses on my displeasure in the first shot across the bow in this new world, Man of Steel. Often, when I flex my snark toward the Zach Snyder vehicle, I am met with a very genuine, “Why didn’t you like Man of Steel?” Since I’ve never documented in long form why I often compare the film to a school bus that WASN’T saved by a ten year old Clark Kent from the lake, I feel it’s important to state why before tackling the further criticisms I have for the growing DC movie universe.

Also, for a much different narrative in praise (or defense) of Man of Steel, you should read Black Nerd Problems contributor Oz Longworth’s piece.

I should also say, that I anticipated the release of Man of Steel above almost any other film in 2013. I remember wanting to dip out of a festival I was a part of to catch it on opening night. When I couldn’t make it happen that night, I finally got time to finally see it about a 3 weeks later just to discover it wasn’t in my local (huge) theater anymore, even though Iron Man 3, which came out a month before Man of Steel was still showing. Not a great sign.

I should be fair in saying that I don’t honestly believe that Man of Steel was an outright disaster. I can understand that people liked the large scale action and destruction, the reluctant hero story and the special effects that pepper it. But I do think its a C+ movie at best. Unfortunately, my love of iconic comic book characters and super heroes adds a modifier to my very average grade, making my critique admittedly feel a bit more dire. Still, I think there were some things that worked in the film or at least, would’ve worked if executed well:

I like that the movie starts in media res. They managed to sculpt a Superman story that doesn’t show us the implicit chronology of him becoming a hero and I appreciated that method of storytelling. Granted, it is easier to do Superman like that as compared to Spider-Man or Batman as he’s never NOT been an alien with superior attributes since his landing on Earth, so you don’t need a radio active spider or gruesome double murder for the story to begin. I also appreciated the wandering nomad Clark Kent. A refreshing take on the non costumed hero. I also liked the early look at Krypton and the banishment of General Zod. Russell Crowe as Jor-El was done right, though too much of a good thing…we’ll come back to that.

That’s kind of where my praise of Man of Steel stops. After his first visit to the Fortress of Solitude, the movie fell apart to me. After bucking much of the canon mythology of Clark Kent and Superman (which was interesting), as soon as he puts the suit on, we’re back to the Christ allegory that is peppered throughout so much of Superman’s mythology. The gratuitous shots of the arms widespread miles above the world. The walking in perfect sunlight, the sun coming down across the sharp jaw line as if ready to ascend into heaven. Yeah, we get it, he’s the savior of us and while he is not like us, he is of us…yeah, we get it. But even here, you can only blame Snyder and crew for not being terribly original in their adaptation. Almost everything else is his fault though. The Jor-El consciousness was cool in explaining to Kal-El his origin, but once it starts helping Lois Lane outsmart Kryptonian soldiers, my suspension of disbelief had essentially been placed in an escape pod and shot back to Earth. Jor-El consciousness was so “real” I thought he was going to refill my drink during the movie at some point. And, lets talk about Lois Lane. Look, Lois is such a case study as most comic book writers have a hard time writing her. She’s a woman in a relationship with the most powerful being on the planet, but has no super powers herself. I realize that there’s a delicacy to writing her character in trying to make her the most realistic.

She can’t be the damsel in distress. Yet, she can’t be a Wonder Woman stand in as she is still an individual with no powers in a world where overpowered beings exist. Snyder’s answer was for her to be every single place that the action occurs and involved in every pivotal moment in the film. She can’t fly, but she can get from Alaska to Smallville to a Kryptonian warship to the air craft “carrying the bomb”…it’s a little (read: a lot) too much. Perhaps Snyder’s goal was to root those moments in human frailty. What it ends up doing is making her the face of humanity in every situation, which means, for you got give a shit about humanity, you must give a shit about her. Yeah, I didn’t really give a shit about humanity in Man of Steel.

Lastly, I didn’t care about the debate of Superman’s morality when he kills Zod. My issue around the third act and Zod’s death had other issues for me. For one, welcome to the trend of having to destroy an entire city to defeat the bad guy. At least, in the Avengers, they are actually fighting a large scale invasion. The final fight between Zod and Superman would make Galactus blush in how much destruction it causes. I get it, its red meat for the action buffs, but its kind of tired and impractical IF we do venture back into the moral compass of Superman. Why does this fight have to take place in the most populated city on the globe? Once Zod is the last man standing from the Kryptonian coup of Earth, why doesn’t Superman try to draw him away from the city? The answer is simple, wrecking a city of big glass buildings looks better. And that matters more when you go back to the end: If Superman gives a shit about Zod frying some civilians (kudos to Zod for giving him a good declaration of his plans then a 90 second grace period to think about it before killing a family)

then why was it not a deal breaker when they were crashing through sky scrapers or throwing tankers into convenient stores? Are we to believe that Zod’s heat vision was going to result in the only casualties after they made Metropolis look like Beirut for 15 minutes? The other big drawback of Zod’s death is taking the film’s best actor (Michael Shannon) out of the mix for future films. That might prove to be the biggest casualty in the long run.

For me, just too many skips in logic, too many caped Jesus moments, too much blow shit up just to blow shit up moments, too much Super Lois to overcome some of the promising aspects the film presents at the outset. Zach Snyder is now running this whole thing and since 300 is problem his best film, I don’t know what that means for the Justice League and its members for the coming years.

And I didn’t even get into the weird high speed Flash-like fight scenes…I mean, don’t even get me started…