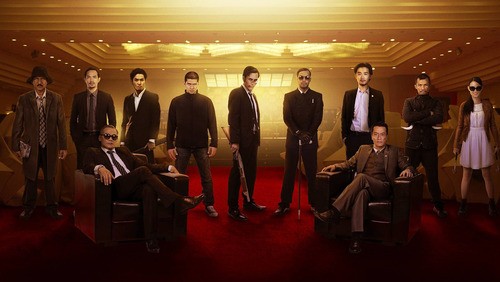 Now that The Raid 2: Berendal is on wide release, I was finally able to sneak away from the monotony of my everyday life and watch this 2 and a half hour action thriller. So after anticipating this sequel for 2 years, I’m happy to report that this movie not only met my expectations but drastically exceeded them by raising and setting the bar so high that I find it hard to believe that it will ever be topped.

The movie opens up with a series of flashbacks and flash forwards (I doubt that’s the proper term but who’s gonna to check me?!) between how and why Rama, (played by Iko Uwais) is currently imprisoned and what happened to the survivors of the first raid. During one of these flashbacks you find out that Rama’s brother Tama was brutally murdered, thus giving us the story at hand; or at least a part of it.

What really shines in Berendal is the story. Simply put, Rama is tasked with infiltrating one of the mob’s strongest families and weeding out the crooked cops that are accepting pay offs from them. Even though the immediate plot seems very generic and plain, there are a many subplots that keep the movie going will keep the audience interested in what’s going on. There is SO much going on in this movie! From the internal mob conflict, to the territorial war between families, I found myself invested in everything that was going on.

Now on to the REAL reason as to why people should see this movie; THE FUCKING FIGHT SCENES! If the story/plot was the shining point of Berendal, then the fight scenes was the supernova! The action scenes in this movie are so goddamn beautiful. Yayan Ruhian did an incredible job with the choreography of each fight. Anyone who plans on directing an action movie in the future needs to take notes. This is action done the right way.

I will say however that I was a bit skeptical in the beginning. It’s not that the fight scenes were bad; it’s just that I had such high expectations and the first two fights in this movie were good but not great. But believe me when I say it gets better!

I don’t really have anything negative things to say about The Raid 2. If I had a complaint it would be that I thought there were large gaps between each fight, but that was more of me being eager than anything else. Also if you are unfamiliar to The Raid Redemption, you may be surprised to find out the entire movie is spoken in Indonesian. Therefore you’ll be reading subtitles the whole time. Subtitles have never been a big deal to me, but if you’re one of those people who prefer not to read subs during a movie, then you’re better off waiting for the English dubbed version; which are generally god awful.

Great story, awesome fights make The Raid 2 a must see for anyone who calls themselves a fan of action movies. And if my sources are correct (and they usually are), then there is already a Raid 3 in production. This fight is where it’s at!