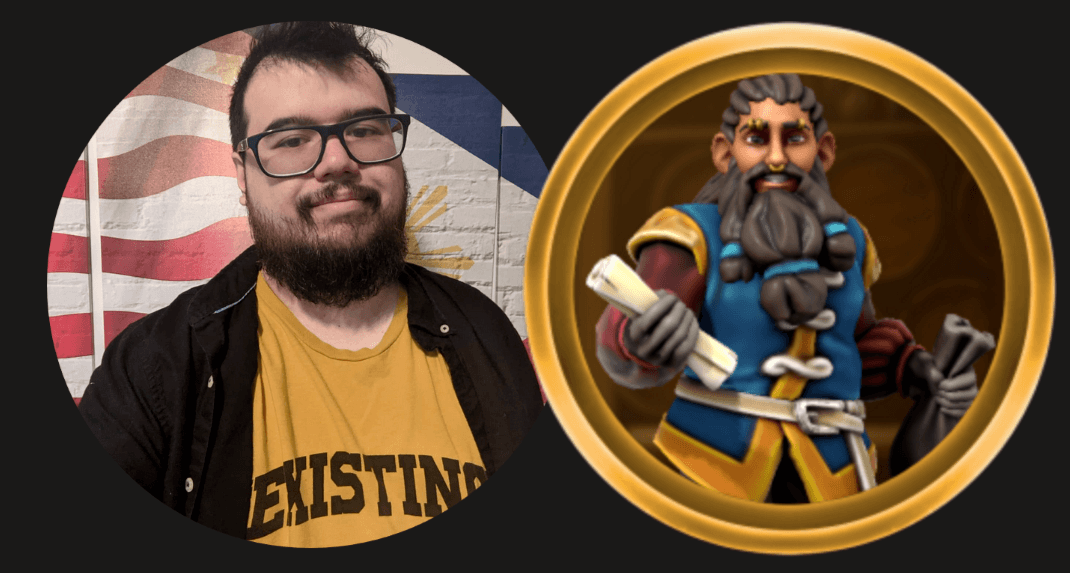 This is an image of one of the many generic resume templates that is currently available on Microsoft Word. It’s about as helpful as any other template, although not how I’d tailor my own.

This is an image of the standard Dungeons & Dragons 5th Edition character sheet. Classic, no notes.

So earlier this year, a new position opened up within my company that my current manager thought I was uniquely qualified for; which, on one hand, was an exciting thing on several fronts, but it also meant that I had to go through the arduous process of updating my resume. I hadn’t updated my single page resume in ages, although I had made it a biannual habit to update both my professional website and my LinkedIn, so at the very least I didn’t have to think of too much verbiage and recall every facet of my professional career up until that point.

That summer I was working on developing a one-shot D&D 5E module with a friend, and as we were sorting through the character sheets and the source books, I got stuck on this idea of the resume as a character. In essence, these two different documents serve an identical function: act as a reference document that marks several key pieces of information that can be reviewed easily, for both the benefit of the person who made it and the benefit of the person using it. As such, a lot of the core principles of creating a TTRPG character and writing a resume overlap. And while it’s probably a little wild to call the resume version of you a “fantasy character,” it’s probably not that wild in hindsight. The resume is intended as a way to create a heightened version of yourself: one whose exact abilities and skills may not necessarily meet the intended obstacles and tribulations ahead but may still be able to conquer them with a little creativity.

As such, let’s approach the resume with a TTRPG lens.

1. A CV is Basically a Source Book on the Self

Many, many years ago, it was impression-ed upon a younger version of me that a CV, or Curriculum Vitae, and a resume were complimentary documents. The curriculum vitae was a long running, expansive living document that detailed every important achievement, work experience, volunteering expertise, and education. The resume was a single page document tailored in such a way that a potential employer would know that you understand what they are looking for with the job and that you have highlighted the pertinent skills necessary. The idea of a one-page resume is so ingrained in my consciousness at this point that I’m not entirely sure if that’s still the case; the constraint also forces you to be cognizant of how you structure your “character.”

Much like Point Buy systems or Standard Arrays ask you to make trade-offs in the six major attributes in D&D, the single page requires you to think about the most important parts of your history as they relate to the job that you are applying to. Not every experience you had in the past is pertinent, so being able to look through your own “source book,” as it were, and curate is helpful.

If you don’t have one already, take the time to write a version of your CV. It doesn’t need to be maintained constantly, but it is always nice to have.

Now, I know you’re probably thinking “what commentary could this person have on the letterhead of a resume or a TTRPG,” and the answer is enough to share an anecdote on both ends.

Depending on your DM and your party, you may be responsible for your character sheet or your DM holds the collective identities of your characters in a binder just as precaution, but that top portion of the character sheet with the names, key identifiers, and experience is something to be proud of. It’s part of the document that’s probably the most static and you take care to put the right information as it is who are. During my first campaign, I went through three characters in rapid succession, trying to find the right combination before eventually landing on the Chaotic Neutral Air Goblin Swashbuckler Nym Nyk. I had terrible handwriting at the time, but you can bet that the penmanship on that third character was pristine.

Now, this ties back to the working world through direct experience. Back in 2014, I was working with a contractor to find a new position. I was living in Wisconsin at the time, and the company I was applying to was in St. Louis. I was fortunate enough that the company was looking to hire someone immediately, but I was very much surprised when the contractor said that the company wanted me to drive 6 hours for an in-person interview. I really did not like my situation in Wisconsin, so I made the arrangements on a two-day notice. On the day of the interview, my hiring (and now current) manager asked me how the drive was, and when I told her that the six hours wasn’t too bad, she was very confused thinking that I was still in the area. Lo and behold, when she showed me her copy of my resume, it turns out the contractor had stripped my letterhead and replaced it with their company’s stock information, which means my then-address was nowhere to be found. We had a laugh about it, and I silently thanked the contractor for the ruse because phone interviews are not my strong suit. It also gave me reason to work one less day at a company I was very unhappy at.

All that to say, that personal information is something to take pride in and also important to get accurate.

3. Play to Your “Strengths,” But Try to be “Dexterous”

In the TTRPG game space, there are a lot of easy guidelines to follow. If you wanna be strong, invest in strength. If you want to have more spell spots than a dictionary, invest in intelligence. Druids need wisdom, warlocks need charisma, rangers need dexterity. There are clear paths that you can follow and equally as many unexplored paths that you can forge on your own. Sometimes you’ll want to create characters that follow their original class all the way to level 20 (although, level 1 to 14 is the farther I’ve ever managed to take a character), and sometimes you’ll multi-class to get odd feats and class abilities (although, I haven’t thought about multi-classing since 3.5e when prestige classes were a thing).

In the professional development space, it’s a little bit more vague. But I think one of the advantages of being in the real world is that there aren’t necessarily hard and fast restrictions when it comes to applying. The qualifications that are listed are idealized postings, and there’s little harm in applying to a position that you’re not necessarily 100% qualified for if you think you have the core talents and drive to do the job. The worst a company can do is say no, and the moment you get over that, the more willing you’ll be to put yourself out there and see what random opportunities you’ll luck/brute force your way into. With a resume, you get to display the information. You get to the forge narrative. You can highlight your writing skills from an I.T. job or maybe just express interest in topics that you don’t necessarily have complete knowledge over. More of an interview thing than a resume thing, but one of the most powerful phases I’ve learned to use is “I have limited exposure, but I’m a fast study.” If your TTRPG characters can make snap decisions on the fly of a dice roll, surely you can create similar situations for your real self.

It is at this point we’ll minimize some of the parallelism and go straight into a bullet list of things that may generically be helpful.

5. Keeping Your “Constitution” and “Charisma” Up

I’d like to end this back and forth on resumes and character sheets to return to the concept of self, because both of these documents are in essences reflections of self. Whereas TTRPGs are a place of exploration, the resume is a place of presentation.

And perhaps, my particular experiences with serial character death (through both botched dice rolls and decisions made through dramatics) and serial resume constructions right out of college (a poor GPA, while ultimately meaningless in the long run, can really throw you off your game in the beginning), I’ve gotten used to making both. I like making both. I like the escapism of making an alternate version of me. I like the challenge of cultivating my own mythology. And I like the satisfaction of seeing either and both succeed at different points in times for different reasons.

Both of these are living documents, ephemeral things needed for a moment. And we can take the lessons of one and apply it to the other in a weird sort of cycle. But just to be honest, all this started because I really have no idea why an actual resume template has these weird percentage bars at the bottom and the other musings came after. But that’s how it goes sometimes.