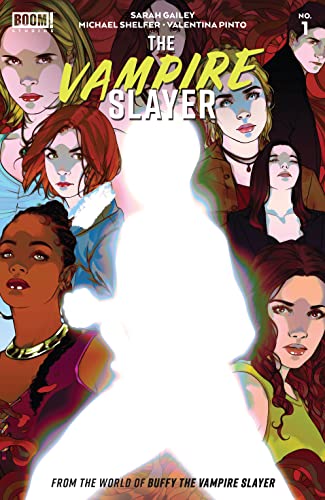 The Buffy mythology is one thing I’m glad has lived long enough to outgrow its original creator that we will only refer to as “He Who Shall Not Be Named.” The history of the Slayer, the adventures of the “Scoobies”….that whole universe seems like its been around the bend and back. And now the series is back for a semi-fresh start in this series that seems to be focused on the world saving crew as a whole.

The Vampire Slayer #1 opens up with the Scoobies trying to deal with a giant (redacted because it’s too funny to give away) terrorizing fair Sunnydale. The problem is that Buffy isn’t a Slayer anymore, and it’s shifted the dynamic in a way that the team can’t find its way around. This isn’t a bad book, per se, but it definitely feels like a step down from the books that have come before. The dialogue didn’t feel as fresh and snarky as we’ve come to expect from these characters. And without the trademark sarcasm and self-awareness we’ve come to know it for, this script doesn’t come across as exciting or fun as it should be.

Meanwhile, Michael Shelfer’s artwork isn’t necessarily bad. The color palette is strong, the story is easy to follow, and the characters are all competently rendered. However, many of the characters look very much the same, or they would, if it weren’t for the differences in hair color, perhaps. For example, why does Rupert Giles looks as young as Xander Harris? Appropriately enough, much like the script, the visuals just don’t do enough justice to the story that’s being told.

Bottom Line: Everything from art to scripting is technically done decently, but the Buffyverse has been executed better than this over the years. Compared to the standard set by related comics over the years, The Vampire Slayer #1 just doesn’t manage to hold the line.