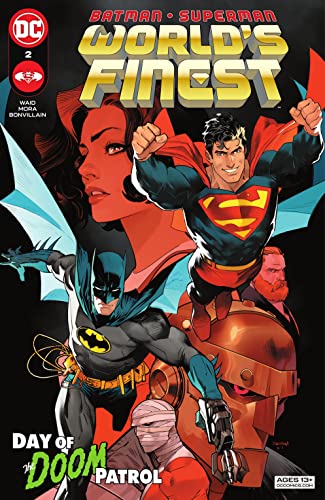 It’s hard to turn away a good old-fashioned Batman/Superman team up. It’s pretty much a cornerstone of the DC universe. With the ever-changing landscape of comics, if nothing else feels familiar, a decent World’s Finest team won’t hesitate to make me feel like I’m ten years old again. And Mark Waid is delivering just that World’s Finest #2 of the time honored team up series.

This time, as Superman recovers from a critical injury, he and the Dark Knight find themselves teaming up with Niles Caulder and the Doom Patrol. They join forces to solve the mystery behind the potential rise of an ancient evil with its eyes on reclaiming the known world. Mark Waid’s script is a fantastic display of his thorough understanding of these characters and their agency in tense situations. There’s an awesome back and forth between Robin and Supergirl that, in addition to being hilarious, lends itself to character development and world building for future outings. Dan Mora’s artwork is every bit as lively and fun as Waid’s script. There’s so much personality packed into every panel and facial expression. Every page is easy to follow while displaying so much detail even during the action.

Bottom Line: Waid delivers a “101” lesson in classic superheroing that manages to not feel too “paint by numbers” and still being smart and funny along the way. Definitely worth the coin if you need your Batman/Superman fix. Pick up Batman/Superman: World’s Finest #2 ASAP!