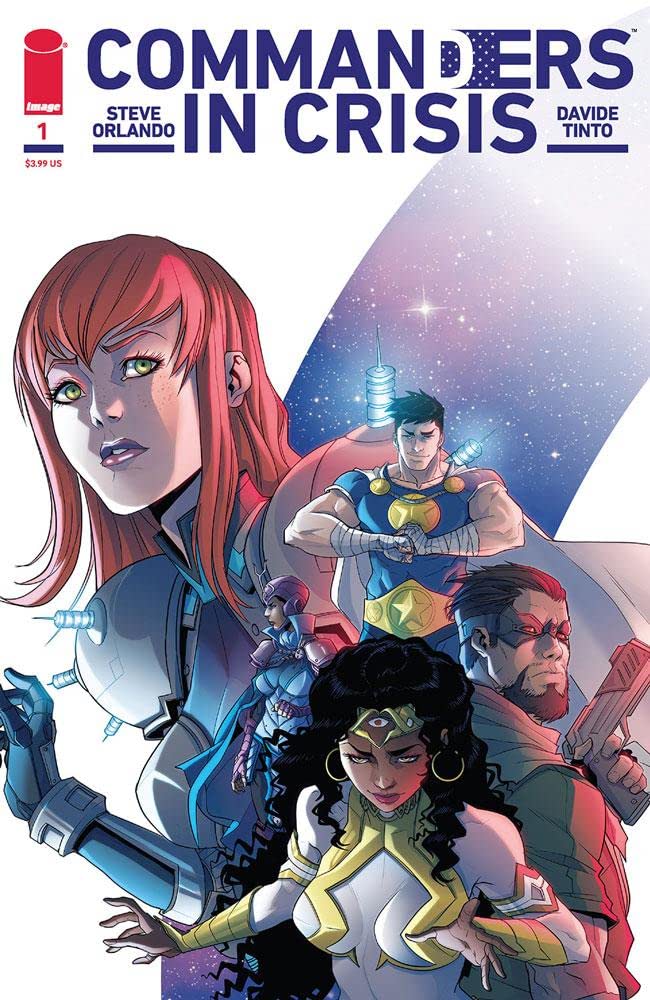 “Crisis” is such a loaded term in comic book circles, and Steve Orlando knows that considering his long and storied tenure with DC Comics. The different Crisis events dating back to the original Crisis on Infinite Earths have always been world altering events, and then of course there have been series that evoke the same high stakes tension without being proper crisis series, Heroes in Crisis being the modern flagship for better or for worse.

All of this to say, when I saw Commanders in Crisis #1 and that this was an Image title, I paused for a second and wondered about the implications. Would there be a multiverse? How does such a grand scale event get approached with a blank slate of a universe? Why commanders?

And after the issue, I have the following answers respectively are: yes, pretty well although I have my critiques, and for a reason that is exceeding topical to the point where it cuts just a little too deep.

Orlando knows superheroes and knows how to make homages and callbacks like the best in the business, largely because he is one of the best in the business. With a cold open that’s reminiscent of Watchmen and a shout out to Killadelphia, Commanders in Crisis opens with a dead body before pivoting to some sort of US Senate hearing before pivoting to a shot of a government looking building where the new slate of superheroes are summarily introduced.

Tinto’s character design is absolutely impeccable, and the full spread that shows the Originator, Sawbones, Prizefighter, and Seer in action is truly a wondrous thing to behold. And part of Commanders in Crisis‘ charm is the fact that it has all of the personality of superheroes without any preconceived notions of these characters. We don’t have history, we only have what Orlando and Tinto demonstrate to us, and it’s kind of a cool world. It’s bright and colorful, and optimistic to the point of being almost saccharine, almost being the operative word here. It’s a little over the top, but that’s less a dig and more just a fact.

By the time I read the final act of the first issue and the big reveal happened, I found myself at odds with how I feel about the premise. Commanders in Crisis is very clearly a piece of work that feels inspired by 2020 and all of the preceding events in modern history that got us to 2020. And it’s admirable in that respect. It’s also a little audacious.

If you’re a fan of Steve Orlando’s body of work, you’ll enjoy this latest endeavor for sure. If you’re not a fan, I’d recommend giving the first issue a spin and see if you have the tolerance for it. It’s an interesting start to a 12 issue mini-series if nothing else.