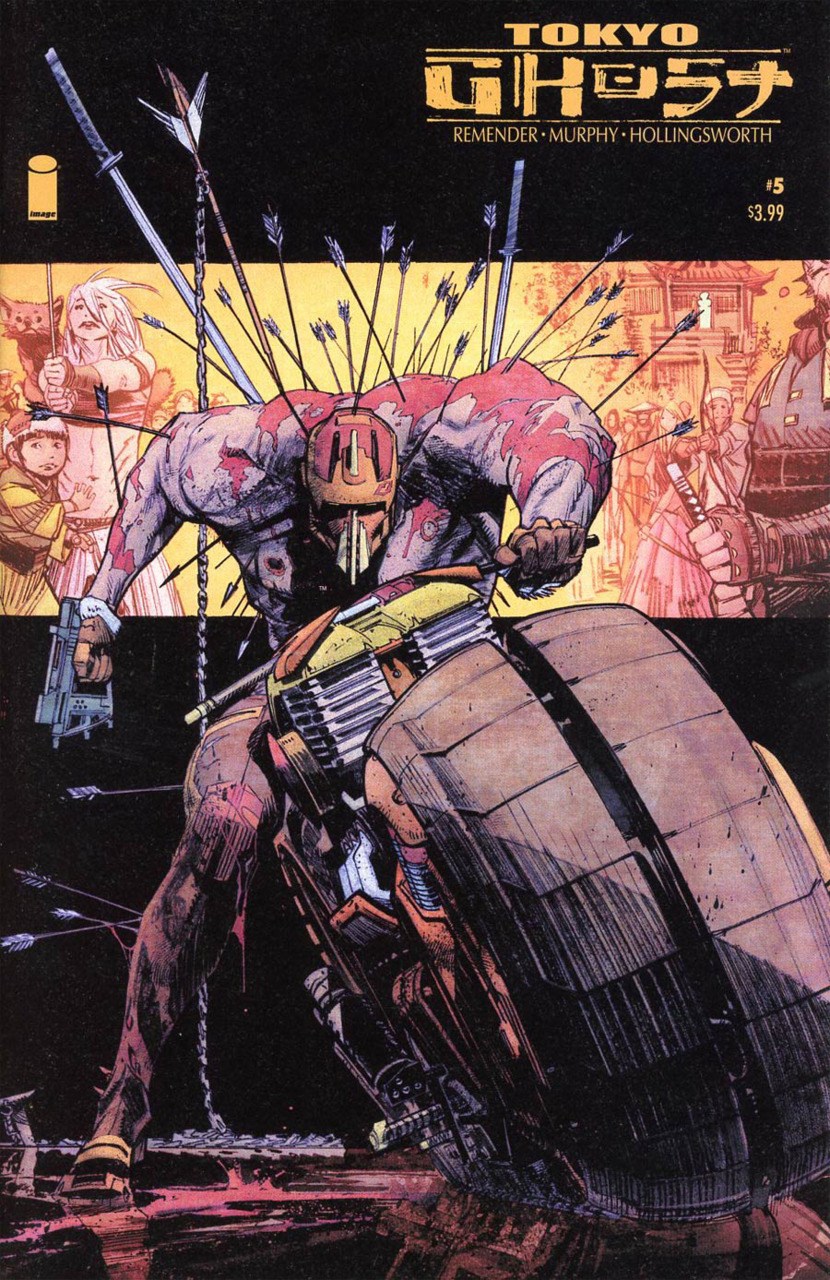 With the latest news that Big Two’s sales (that’s Marvel and DC for the uninitiated) are down lately, readers are reaching out to independent and creator-owned titles. Some writers and artists are turning away from work-for-hire Marvel/DC gigs and promoting their own original projects, telling the stories they want to tell. And, apparently, we appreciate them for it. Rick Remender, for example, has had a really good run for the past couple of years with Black Science and Low. So far, his latest venture, Tokyo Ghost, has been a solid cyberpunk/action/thriller that has also served as a cautionary tale on what could become of our techno-addicted society. So, how well does Remender’s first chapter close things off?

Issue #5 concludes Remender’s first story arc in completely psychotic fashion. No, seriously, guys… the whole plot went completely left-field. There’s enough colorful, explosive, bloody, ultraviolent tomfoolery to give anyone a seizure from pure sensory overload. It’s as if Remender was a 6-year old boy who built a perfectly crafted Lego city, spent hours positioning all the little figures where he wanted them… and then decided to play Godzilla and walk around, stepping on it all. There are a handful of tender character development moments, highlighting the severity of our heroes’ decisions, but they’re all mostly caught up in the whirlwind of violence like Dorothy being whisked away to Oz.

The ending is a little more open ended than we’d prefer, leaving a few questions, but anyone who has read some of Remender’s other work knows that usually means there delightfully strange days to come in the issues ahead.

Penciler Sean Murphy and Colorist Matt Hollingsworth have taken the unapologetic mayhem in Remender’s script and given us a visual masterpiece. One thing Murphy does well, better than anything else in this comic (and that’s saying a lot, for the record) is give these beautiful depictions of Led Dent going batshit crazy on the bad guys. And let’s be honest: if you bought this comic after reading the first issue, it’s because you want to see a cyberpunk, internet-addicted cop dealing death while his brain is plugged into YouTube (I’m assuming if the world is one big internet opium den, it’s because of YouTube).

Bottom Line: This issue managed to wrap the first chapter up in a way that isn’t necessarily as neat and nuanced as the book started, but still managed to be fun and leave us satisfied. Oh and Sean Murphy’s artwork makes miracles, so there’s that, too.

8 Discarded William Gibson Scripts out of 10