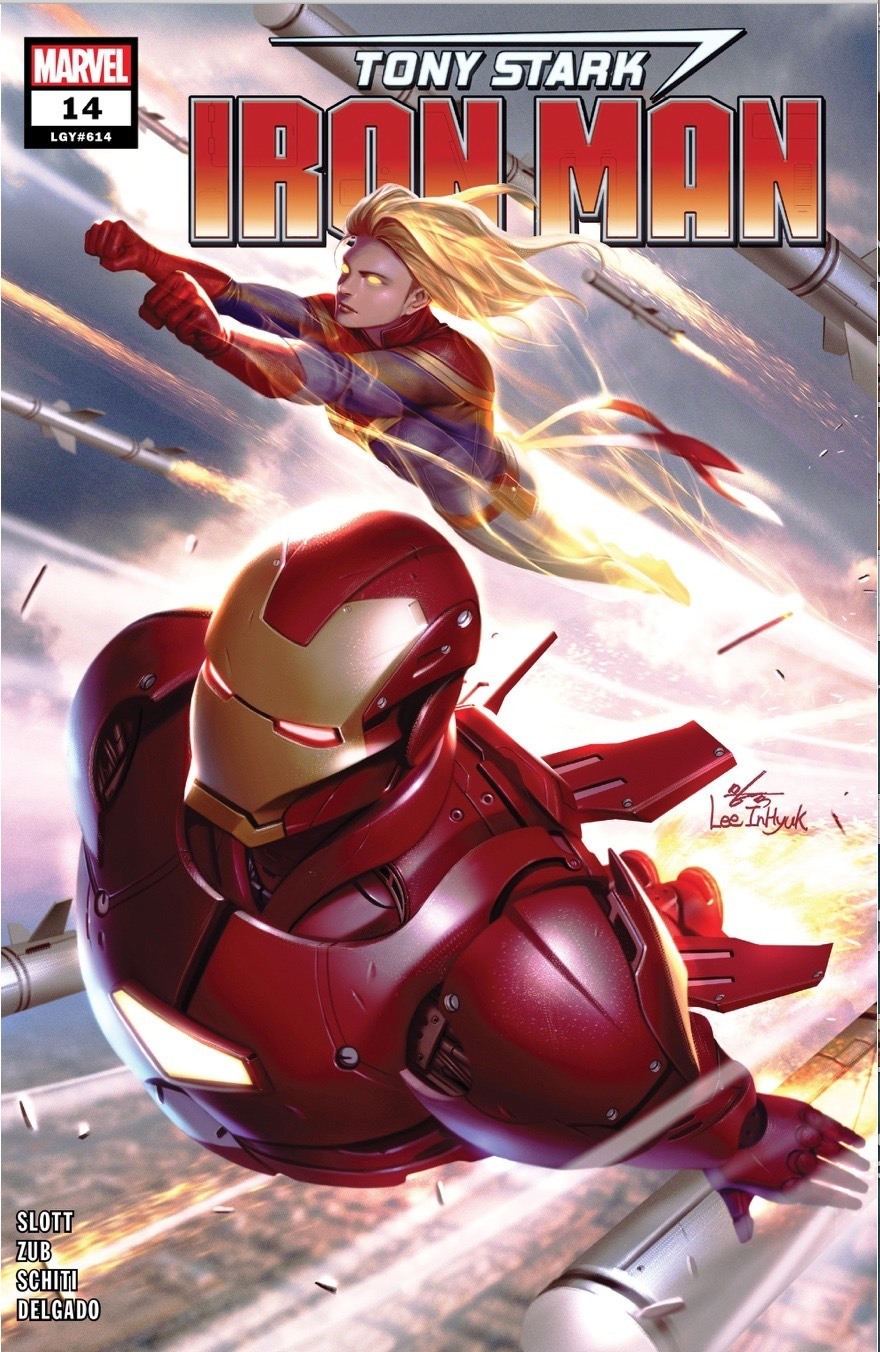 It’s been a long time, shouldn’t have left you; without an iron suit to step to.

Tony’s back! Dan Slott and Jim Zub are on the m-i-c delivering another entry into the Stark continuum. Issue #14 rides in strong on the heels of the resolution of the War of Realms. Tony did his Tony thing, helped save the day, fought a dragon, made Odin some armor, kept it snarky and boom. Back to your regularly scheduled. Now that Marvel’s Lord of the Rings homage is complete, we get back to the techno-opera that is Tony Stark: Iron Man.

Slott laid the groundwork for an arc that opened Iron Man’s character profile into a fully blossomed lotus. We’ve been given more access to Tony and his world than any singular retcon could ever rectify. Now that we’re all up in Tony’s whole life – Slott and Zub set all of the aspects of Tony are laid out like a deck of cards. This arc’s theme is centered around ‘upgrades’. 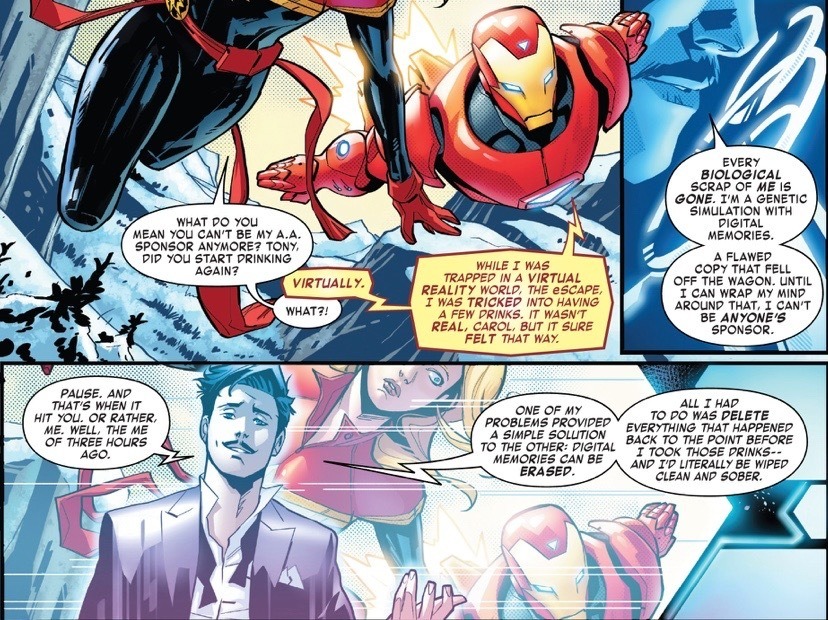 Still reeling from learning he is not much more than a living simulation of his former self, Tony is on a mission to better himself. Realizing he’s more biologically digital than analog, he goes to work on his own mind. At Stark Unlimited morale is still shaky as #TeamTony is still recovering from the assault from Baintronics via The Controller. Issues #12 and #13 saw Iron Man make some tough choices that left Tony to pick up the pieces. As a CEO in crisis, his company is caught in a web of corporate espionage. As a failing friend, Jocasta quit after Iron Man absorbed the Friday AI against its wishes. As an Avenger, he’s learning to be accountable to himself. As a brother, he’s about to get stole on by Arno Stark and he ain’t even know it! 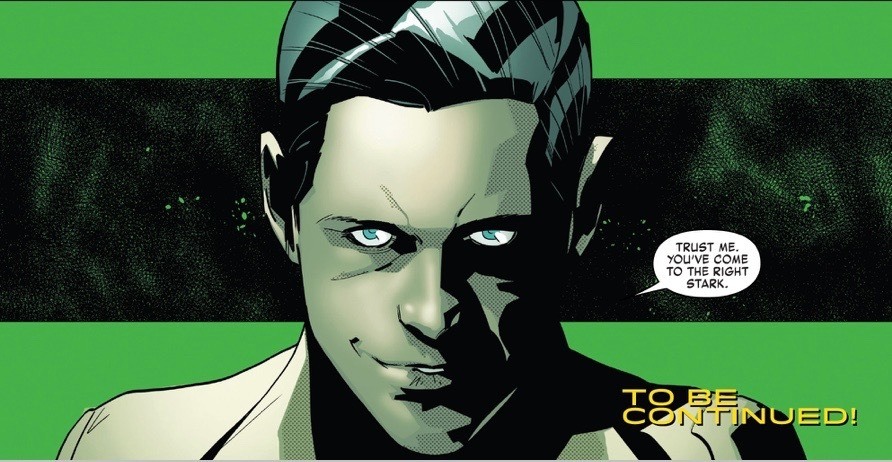 Valerio Schiti elevates the art in TS:IM with asymmetrical panels and flashy color palettes. The decision to do away with giant splash pages and focus instead on designing sleek action scenes paid off. Minimizing the clutter of the early issues allows the visuals to carry the complex narrative. Schiti delivers yet again, with special mention to the way each ‘scene’ has its own art style; from the monochrome android bar to the hard lit laboratories to the primary-colored skies. 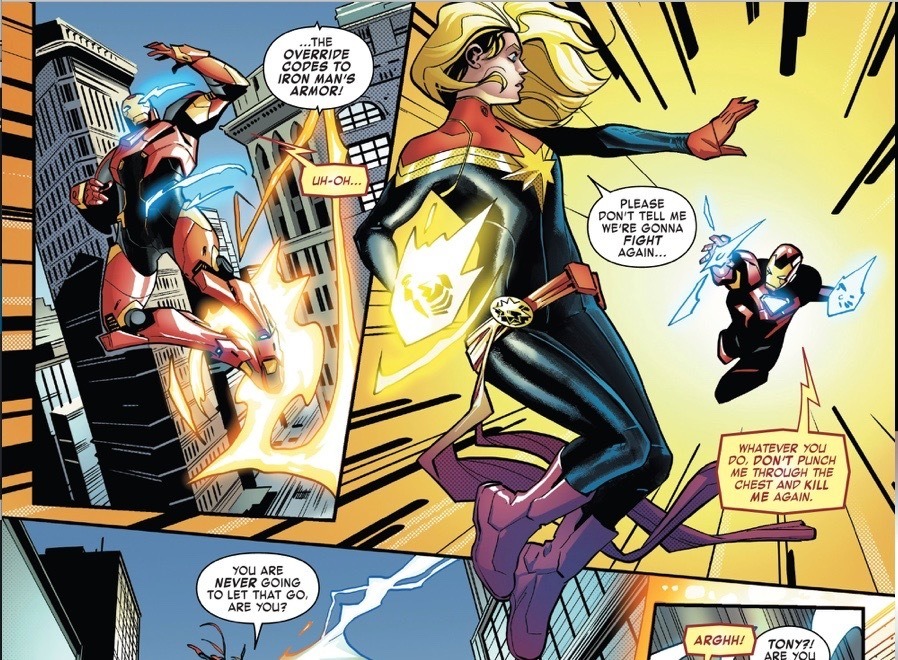 Slott and Zub are still carrying this redefinition of Tony into the next chapter by reminding readers of what is left behind. The very thoughtful use of Captain Marvel as a cosmic powered Jiminy Cricket centers Tony on what defines him at present, his death (at Carol’s hands) and resurrection. Everything else is just icing on a very substantial cake. This run is changing the game on monolithic icons in the comics landscape. Jason Aaron did it with Thor: God of Thunder, Kelly Sue DeConnick did it with Captain Marvel, and Jonathan Hickman is about to do it with House of X. We are witnessing another changing of the guard and Tony Stark:Iron Man is right in step with the changes.

7 moments of clarity out of 10