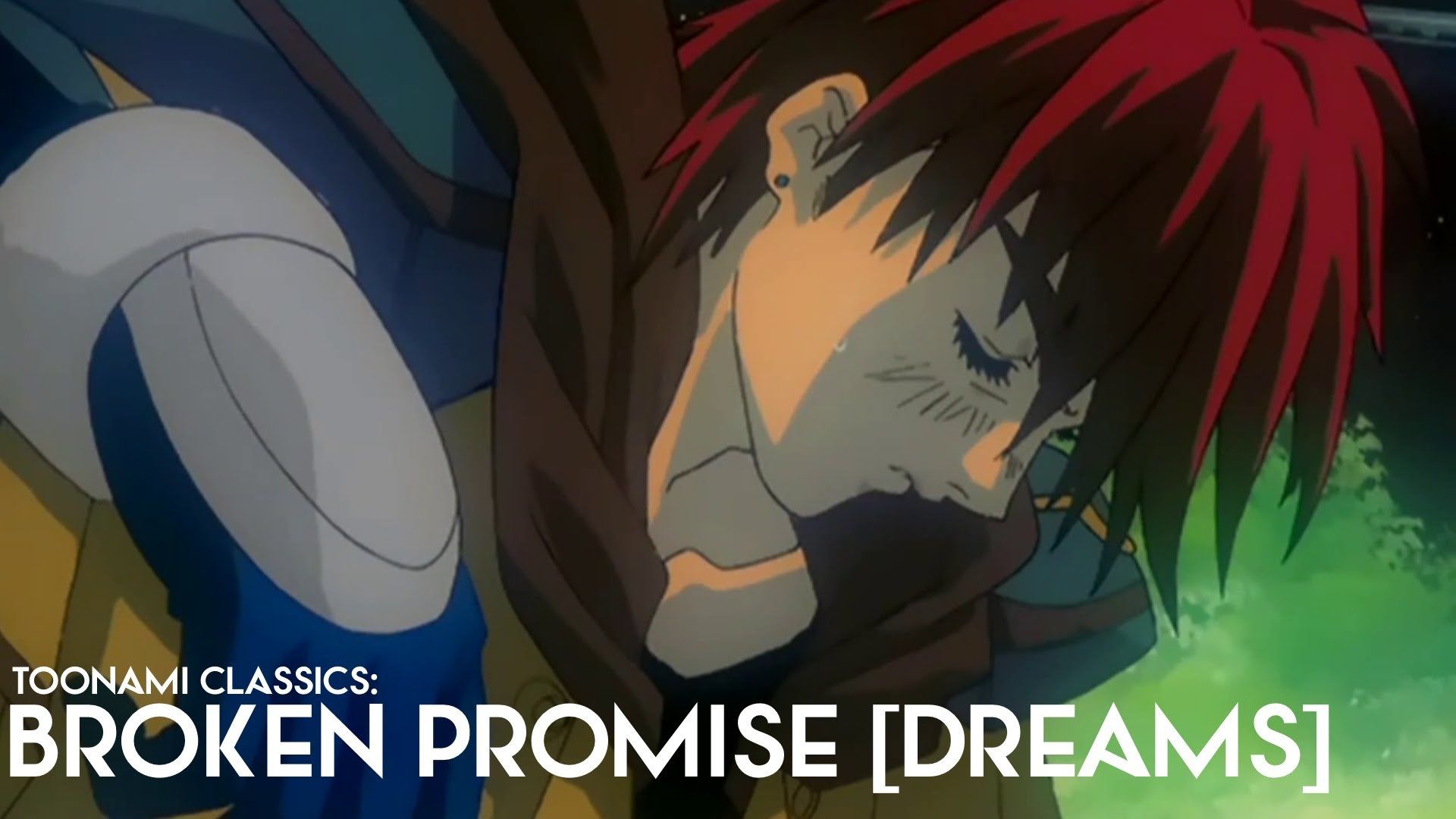 I remember Toonami first as a feeling, a breathless hustle home on weekdays to watch the latest anime episodes I didn’t yet recognize as classics. I often joke about comparing my Sailor Moon fandom to a religion but looking back, if this early 2000’s hallmark wasn’t a sacred ritual, then I don’t know what is. Like many spiritual practices, it wasn’t until I was a full grown adult that I truly had the ability to appreciate TOM and SARA’s careful curation (which, sidenote, is also why I’m hype for the recent confirmation that Toonami will be alive and well for generations into 2021).

Consider the original music video “Broken Promise [Dreams].” It’s been almost two decades since Toonami first aired their visual found poem (and arguably one of the greatest AMVs of all time), but pull up that bad boy on Youtube for any member of the Cartoon Cartoons generation and the anime praise dances start flowing before you can blink. Trust me, I tried it in my office once. Productivity tanked for like an hour.

Hell, I still think about this video all the time, and I ain’t even like the shows that were in it that much, that’s how amazing it is. It’s so iconic Toonami not only re-aired and remixed it throughout the years, they literally compiled an entire homage with their 2016 line up. So with that being said, let us now open our browsers and go to the good word, beloveds:

Ooo, that composition so smooth. That’s that gentle audio caress, fam. Composer Joe Boyd Vigil already got you leaning in to watch this Outlaw Star clip and ain’t nothin’ even happened yet.

As a child space is the metaphor for the starless void of adulthood, a vast cosmos you’re almost itching to explore yet caught in a cold terror at its unknown depths. As an adult it’s the unmapped planets of your future, the rehearsed precision of a rocket launch you try to watch from careful distance. You know the trajectory, but… do you?

“A boy has the right to dream. There are endless possibilities stretched out before him.”

First of all, Beau Billingslea sound like your Black grandpa sitting back in his chair at the dinner table about to deliver the sagest advice of your Bastdamm life, so I don’t know why this man keeps voicing supporting roles other than the fact that the dubs must be like, “Damn, this man Black AF, but we only got like five dark-skinned characters oh well.” Billingslea’s voice feels like a down comforter for your soul, yo. I could visit the midwest in January, just pack this recording, and still be aiight.

What strikes me most about this sound clip is that it’s actually part of a longer monologue from Outlaw Star that meditates on the tragedy of growing up and how the choices we make begin to limit once “endless possibilities,” subtly suggesting compassion for others because we don’t know what choices they’ve had to make. Rather than melancholy, however, this sample is still in present tense without the hint of exception (ignoring the gendered language that was part of the original text). Paired with the image of Super Saiyans Goku and Gohan goofing off in the grass, we further understand this to mean there is both power in this act and joy.

You have a right to dream with delight. Without restraints. Still.

“You have to trust in your own power. Whatever happens from now on, you stand firm and face your destiny without fear, but with courage. What awaits him down the path he will then have to choose.”

Tenchi and Future Trunks are two extremely different forms of hero; one essentially has everything handed to him by destiny while the other struggles to survive terrible loss. Both face choices that change the entire course of their lives, however, and must do so with the utmost bravery. Like either warrior, we are all equipped with the power to face the adversarial forces that await us. It helps if you’re part ancient alien prince, though.

“No one’s gonna give you a map, you’ve gotta walk your own path. Children leave their homes in search of this quest. What is thy desire?”

I used to think that folks complaining about Millennials, especially our supposed entitlement, were exclusively a clickbait thing until I actually heard that ish in real life said to my face. It’s even more wild when you consider we were literally being told by children’s media that we were going to have to develop our own skills and resources in order to achieve our goals. But oppressed communities have always known these lines as fact.

“As they search, they are always asking questions. What’s out there? What’s waiting for me? Why was I made? Who made me? And what did they make me for?”

If I had to specify a segment that’s always stuck with me, it’s this one. It’s important that all of these questions are delivered with genuine curiosity rather than defensiveness or hostility, a gentle invitation to remember that we don’t always have the answers. There’s a few versions of this quote about curiosity, but my favorite is by Tracee Ellis Ross: “As I get older, the more I stay focused on the acceptance of myself and others, and choose compassion over judgment and curiosity over fear.”

Don’t just stay woke. Ask why you were asleep in the first place.

Of course, questioning always leads to confrontation because it’s bound to make someone uncomfortable. But at some point, in your darkest days, you’re going to have to decide for yourself what you want the future to look like. Even running away is a choice with an outcome. Are you going to travel into “space” carrying the symbols of your baggage… or not?

“Believe in yourself. Create your own destiny. Don’t fear failure.”

Remember: you have a right to dream.