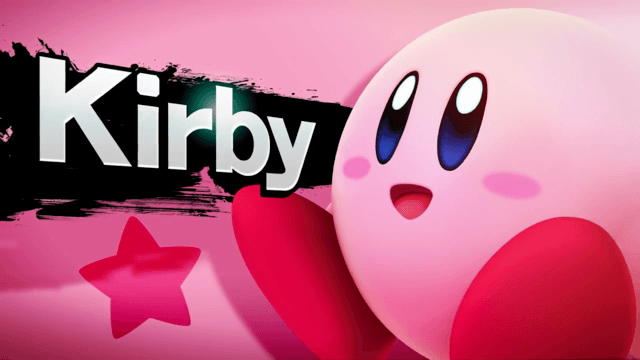 If it’s your first time picking up the 64 controllers or giving Super Smash Bros a shot, there are a few go-to characters that rarely let a novice down. Whether it be because that character has a unbelievably strong move that rookies can rely on or because they are one of the most iconic characters to be featured in a Nintendo production, people have their reasons for loving who they pick.

Some people want their character to represent them in some way. Some pick the protagonist of their favorite video game from childhood. Some pick one of the 3 arguably best fighters in the game. Some pick a fighter as a response to an opponent’s pick because they know the ins and outs of each characters speed, power, attack moves, and weaknesses. Some flat out allow their opponent(s) to select their fighter for them because it makes no difference whether they trot out there with Jigglypuff or Link, the beats is ’bout to be put on dat ass before this day is done!

Now, let’s get into this beast of a gumball. Kirby da GOAT. The assimilater. The pink stink. The dive bomb king. There is so so much to be said about this character. 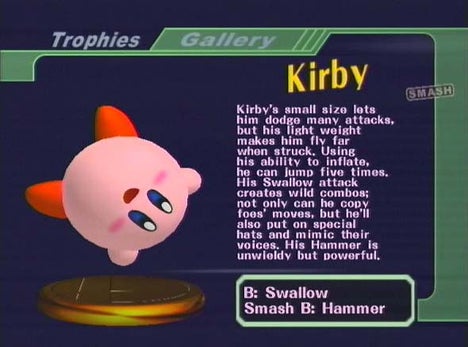 Kirby is just so damn serviceable that it’s easy for beginners to hop in and have a decent round button mashing and throwing basic smash attacks. Meanwhile, vets nasty enough to wreck house can roll up into any fight out there and beat the snot out of any single, double, or triple team. His smash attacks have a mix of long and short range distance. Then we have DEM HANDS. Kirby has a bevy of super powers that I’ll go into much further detail about, but right now I want y’all to focus on the jab tactics.

Once those punches start flying, watch out ’cause you ’bout to be in a suspended animation pummeling. Kirby is dumb quick and elusive. He’s got that short character advantage (a la OddJob in GoldenEye) so it’s hard for some opponents to hit him and extremely difficult to shoot Kirby with any of the character’s or game’s guns. Kirby also possesses one of the game’s swiftest Z-recovering moves, which allows you to get right back into the action after taking a hit. As most people know, hitting that Z button during certain situations is what separates average players who typically become punching bags, and the experts who run shit every match. Every fighter has their special B attack. Some are dope, some are gimmicky, some are powerful as a Spirit Bomb, some are weak as a Magikarp Splash attack. But even the wackest can be used the right way and keep someone from getting back onto the board after being blasted off, or can give you that extra 3 seconds of breathing room so you can go grab that Pokéball or Recovery Heart that just dropped. But Kirby, dog? The Pink Piranha, b? Son can take your powers! Son can absorb anyone’s powers!

Of course, some stolen powers are far superior than others (looking at you Samus blast, Donkey Kong windup giant punch, and Falcon Punch) but the fact that he can go from a round beenie baby to a fresh-to-death soldier with projectiles and super punches put him leagues ahead of most character’s capabilities.

Kirby was graced with the gift and curse of being able to manipulate the game to his liking because there is no one way to prepare for the cotton candy crippler. Just accept your power-taken fate and do your best to knock those stolen skills out of him, because nobody wants to get beat down by their own superpowers.

What the hell does it take to destroy a pink blob of joy? I mean, homie is supposed to be one of those “weak” characters that are easy to knock off the board once their percentage goes above 75%, but 15 seconds after you done sent the Kirb stomper skyrocketing into the abyss and you’re focusing on molly whomping another victim, he comes puffing his way back into your business ready to wreak havoc.

This guy never gives up. The ability to fly across vast distances with his puffed up body is one of the hidden gems in Smash Bros. Kirby and Jigglypuff both have this ability but only Kirby can come all the way back from the grave and have the testicular fortitude to sentence all three opponents who thought he was a goner, to a fiery star death.

Look up in the sky. It’s a bird, it’s a plane. It’s stone Kirby plummeting at mach 3 speed obliterating any player in his way! YO. This attack is so deadly, I’ve seen cats use this move and this move alone every single second of the match… and almost win! I can’t deal with those guys. I take special pleasure in beating these sad sacks.

The stone Dive Bomb is unequivocally deadly as an asset when you’re high on the percentage or in need a quick kill move. Next time you get a smash battle brewin’, keep checking the top of the screen because you’ll be sorry once Kirby drops the fade bomb on you and your sucker friends.

Hmmm, am I tryna rock that Legend of Zelda green floppy hat today? That Donkey Kong Country fur coat? That Metroid suit? That F Zero helmet and visor? How ’bout the classic red Mario plumber fitted?” Yo Kirby got the most vast wardrobe on the planet. Ain’t no tellin’ what color scheme he’ll be going with mid battle.

At the start of the round, you’re going blow for blow with a normal pink Kirby then you find other opponents for a couple minutes and before you know it, you wind up face to face with Kirby again, but this time he’s got a charged up DK punch ready to unload on his first unsuspecting victim… YOU. And even when he isn’t done up in his finest garments, he’s easily the cutest little guy in the game.