If you don’t know about the Mario Kart series then you real Jon Snow right now. (Super) Mario Kart debuted on the Super Nintendo back in 1992. It took all our favorites from the Super Mario series and put them behind the wheel of go karts for a friendly competitive race. The game looks innocent enough when you check out the cover right?

Nah man, This shit is the original Twisted Metal. The “villains” and B-String characters finally got a chance to fucking shine and they ran with this shit. Mario Kart will blacken your soul yo, this shit is not for the feint at heart. This is the most kill or be killed game and as the years went on with each new Nintendo console that debuted we got a Mario Kart to go along with it, each amazing in their own right but when that Gamecube dropped there was one Mario Kart game that took it to a whole new plateau… and that game was Mario Kart: Double Dash.

1) “Now When We Roll, You Motherfuckers Tuck In Your Gold”

The best addition in Maro Kart Double Dash is that, now, instead of playing as one character you are controlling two. One person does the driving while the other person does the shooting. You can select your driver in their original pairs (Mario Bros, Princesses, Toad & Toadette) or mix and match your drivers. This shit was also incredible because now it allowed for two players at a time to be on the same team. Where one person is driving and the other does the shooting. This was some straight up WWF Tag Team champion shit because you gotta learn to be in sync with your partner, helping with the lil drift boosts, ensuring that attacks against you were blocked, the driver could also hold an item and as soon as the shooter was empty, toss said item back to them or switch places and let them take the wheel. Mario Kart Double Dash basically introduced the drift technology used in Pacific Rim

2)“Then We Get Rid Of The Rock like Dwayne Johnson”

As if the double trouble wasn’t enough. In Double Dash each character had a special item that was assigned to them. For example, Toad and Toadette’s special item is the golden mush room, capable of unlimited amounts of turbo bursts for a limited time. A lot of the character special items fell into the category of defensive (Peach and Daisy’s heart shield), offensive (Mario & Luigi’s fireballs) or both. You could use Wario & Waluigi’s bombs as an offensive assault from the front or as a planted trap for enemies behind you. The best portion of this was mixing your characters up for whatever desired effect. My personal favorite was playing as King Boo because his special was being able to randomly get anyone else’s special. As if shells, fake item boxes, and lightning weren’t enough this was another dangerous element that was guaranteed to do dick over your day (or someone else’s) in one way shape or form.

Now it ain’t Mario Kart unless we talking about the great equalizer. The fucking reason car insurance is so damn high up in the mushroom kingdom, The Blue Shell. Double Dash went and gave this already deadly weapon the fucking Jurassic World treatment. They brought in scientist to a think tank saying, “How can we make this shit more deadly and piss off more people within the radius of it as well?” The consensus was giving it wings and having it home in on your and spike down with a radius of Goku’s Spirit Bomb so not only are you fucking over the person in first but also anyone near first. This is a new and improved Blue Shell with more, “OH WHAT THE FUCK?!?!?” per square feet.

4) “First, Let Me Hop Out The Muhfuckin Porsche” 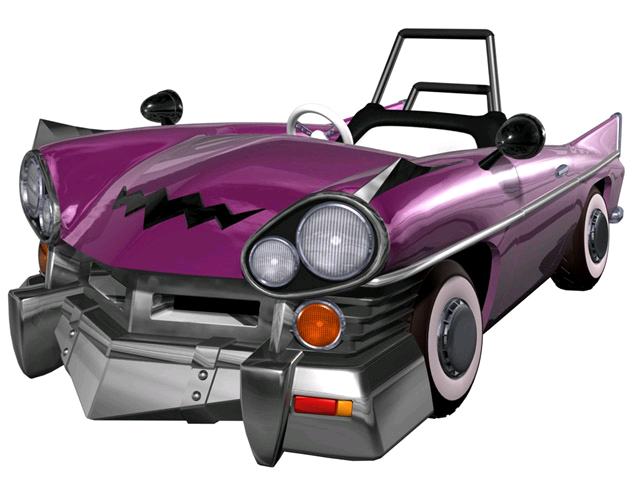 Yo, the whips up in Double Dash was straight up looking like the parking lot in Hotlanta at a Ludicrous video in ’02. Candy paint dripping off the sides, and shit. I mean the baby Mario and Luigi had a fucking bullet stroller as their car. A fucking Bullet bill stroller, with the top speed of LIGHT SPEED. Me? I was fucking with the Wario & Waluigi purple Hawkeye candy coated Cadillac man. Look at that monster, it had a bit of a slow acceleration however, the top speed was unfuckwtiable. Plus, it just looks so fucking bad ass, the weight was great for using the character to just bully other vehicles out of the way as well.

5) “Get Too Close To *Controllers* It’s Like: “Protected By Viper, Stand Back”

When it comes down to it tho’, Double Dash was the best in the series due to the impossibility to cap the level of carnage able to be produced in this game. I done seen things I can’t un-see man. Everybody got their own stories of outlandish shit you came across or see a fend do (or get lucky with) while in the war zone of shells and bombs. Back in college I had a brain storm and found a way to launch a bomb at the top of the spiral drive way of Bowser’s castle… from last place, ruining all my friends ahead of me. I done seen my boy out run a blue shell with Toad/Toadette’s magic mushroom special. Now there are ways to do it with more finesse

But we ain’t know that back then, we just saw this dude cancel out a blue shell and we’re like, “That’s fucking possible? ANYTHING IS POSSIBLEEEEEEE!” There’s also no way to explain to you the worst loss my friends and I ever suffered; it was when my girl, at the time, came down stairs to join us and beat THE WHOLE SQUAD FOR 20 GAMES WITH NOTHING MORE THAN THE KOOPA TROOPAS AND THEIR SHELLS. The whole while she was talking that shit sayin,

IT DON’T GET MORE HOOD THAN THAT MAN! There are friends I still don’t talk to today due to a loss in Mario Kart. Mario Kart is like alcohol without the drunken effect cause it is going to bring out the person you truly are from the depths of your soul. You know who you are after about 5 rounds into Mario Kart and you are hoping somebody’s parents owe on their taxes or you say fuck winning the game and just want to ensure that whoever dicked you over last never sees first, second or third place at all. Mario Kart is the true Mad Max of the racing genre man. There can’t be any question about that shit. The only question is, do you have what it takes to screw over your friend and take first place by any items necessary?