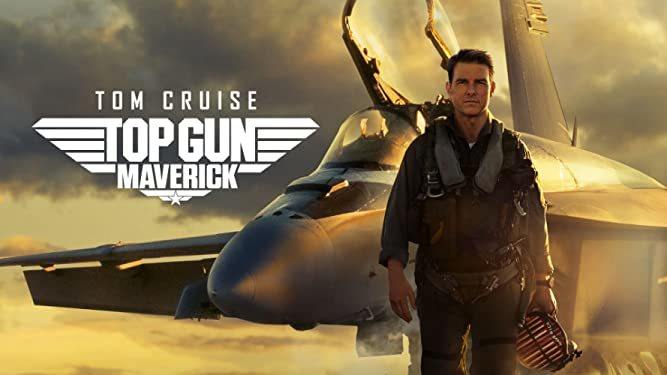 Top Gun: Maverick is for all intents and purposes a good movie. It doesn’t glorify the military but instead teamwork and doing things for the love of it and not the glory. There are still military recruiters posting up outside of showings of it. When coupled with Tom Cruise’s many roles, it begs the question: is his cultural impact really that he is a plant for the military-industrial complex?

The Top Gun That Was

There can’t be anything to say about Top Gun: Maverick without reaching back to discuss the first Top Gun. This will be so referential that it’ll have the feel of those Levi’s ‘Buddy Lee’ commercials. “Tom Cruise is Tom Cruise, in…Top Gun 2! Executive Produced by Tom Cruise.”

Either way, the 80s gave us a new archetype that echoed all throughout the films of the time: the ‘hero’ as the wild card. The nerds in Nerds, the rascals in The Goonies, the motley crews of John Cusack’s many early movies, Naked Gun and all of John Hughes’ movies. So on and so on. But who knew that Top Gun would blow the roof off the idea and cement a new action archetype? Every marketing department on Earth, that’s who. Tom Cruise’s ‘Maverick’ would inspire writers for decades. Making the story’s hero a reckless, devil-may-care type that audiences can rock with and deal with little to none of the consequences of their actions was just what the 80s needed. That was sarcasm, the out-of-control capitalism, and warmongering of the 80s didn’t need any encouragement, but lo and behold Top Gun.

Top Gun is the first ever film to use actual combat-ready planes (but not the first to use real planes), a mighty mean Cold War flex if I’ve ever seen one. Despite that moment of authenticity, the combat cinematography was terrible! You can’t tell which direction pilots are flying, they’re looking everywhere around the cockpit, and you NEVER know if this whole thing is a simulation or not! Not to mention the highly questionable if not borderline illegal student/teacher relationship. At that time, the real-life Cold War was on a high simmer. Things were tense on the geopolitical landscape. It was a stroke of narrative genius to use that tension in the movie. The non-descript ‘Soviet’ planes gave the whole thing an over-the-top realism to match the rate of sweating every pilot did in that movie.

Highway to the Danger Zone

Do you know those memes that reference when someone went too hard in the studio for the soundtrack? Phil Collins for Disney’s Tarzan, Tevin Campbell in A Goofy Movie, Adele in Skyfall, etc. I humbly submit for the culture’s approval Kenny “fucking” Loggins to the mix. Bast dammit, that man put hot sauce all over “Danger Zone.” Who knows where the danger zone even is? Does it matter? All we need to know is that there’s a highway that goes right to it. Not for nothing, but Kenny Loggins MADE this movie go. I would posit that the music of Top Gun contributed greatly to its cultural impact. If you ever need to find your way to a quintessential 80s piece of media, just fire up your GPS and catch the nearest entrance onto the *signing way off key* HIGHWAY TO THE DANGER ZONE! (sorry, not sorry)

Is the Danger Zone a Sundown Town?

Another touchstone in OG Top Gun is that it was shockingly under-melanated. Nary a negro in the movie save for small and silver screen vet Clarence Gilyard Jr. So, bless the representation gods that he’s even there. Wait. What was his callsign? Oh yeah, Sundown. The only Black pilot is named Sundown?!?! Wow. Well, let that speak to what happens when not enough creators of color are in front of or behind the camera. To say that Top Gun was very white is a gross understatement. Mind you, I absolutely love this movie, but my goodness it aged awkwardly.

The Top Gun That Is

Top Gun: Maverick is giving ‘Tom Cruise is, Maverick in…Top Gun 2: Does He Still Have It?‘ The awkward part is, that I was going into it expecting a well-made but bad movie. I spent weeks leading into seeing it talking smack about it with friends, knowing good and well I was going to see it. In my mind, there was no way this wouldn’t be a slightly mindless military propaganda flick with little more to offer than a couple of cool dogfights. I can admit that I was pretty damn wrong.

Top Gun: Maverick is a darn good movie. Somehow, we center on an aging Maverick, who in his older age is still flying planes. Only now, he has the added dimension of bucking the military-industrial complex that made him by piloting experimental planes in the hopes of space exploration. He literally traded in his reckless f-boy attitude and desire to be the best of the best for the desire to be an explorer for SpaceX! You can’t write that kind of a character arc! Oh wait, you can! Like most of the movie, it’s surprising how much depth there is in each individual element. Cruise delivers a nuanced performance that gives Maverick multitudes. More than the character deserves. They find a way to make this guy likable and that is an achievement in itself, because I recall him throwing his best friend’s dog tags into the ocean when last we saw him. The growth?!

I Feel the Need…For Good Cinematography

Unlike its predecessor, the flight cinematography is stellar. It gives the illusion of true speed and makes the science of fighter piloting accessible. With the exception of Starbuck shooting while flying backward like Diddy reversing the whip in the “Hypnotized” video – I haven’t seen anything this good. The dogfights, whether simulations or otherwise, are mean, lean, and pushed the story forward. There’s something to be said about using combat as storytelling, and Maverick pushes the needle forward in that regard. The need for speed is on full display, and I can’t knock a second of it.

A Cougar and a Manther Walk Into a Bar

Let’s call it what it was, Tom Cruise and Kelly McGillis’ teacher-loves-student in the original Top Gun was looking wild inappropriate. Top Gun: Maverick raises the bar by raising the age. Somehow in the midst of all the mild political intrigue, callbacks, and redos, Maverick delivers a very layered and nuanced age-appropriate relationship for the aged hot shot. The maturity and wholesomeness of this are almost enough to make you forget the whole IRL Scientology quasi-cult thing. Who else could hold that leading lady vibe alongside the titular icon but the real-life Highlander herself, Jennifer Connely? Their chemistry isn’t the random smashed-together thing of Top Gun past. No, these two really make you feel something real – it’s a genuine accomplishment and isn’t very common in mainstream movies.

Top Gun, but Make it Modern

There are a few clever modernizations to the house that Tom Cruise built. All are very socially aware and referential of the present day. One is a callback and an update at the same time: the US is still beefing with Russia! The resurgence of Cold War tensions with high-tech and economic espionage is front-page news and barbershop gossip once again. Maverick does some very cool things with it storywise, but it borders on offering an opinion about how the US can run up in any country and blow shit up. Those moments struck me as very World Police.

Inclusion is the Weapon

Another sign of modernization in this franchise is that all of a sudden, more than one Black person knows how to fly a fighter jet! With women! Then type B personalities! Plus AAPI folks?! DEI meters were shattering from the sheer pressure of the representation. It was progressive politics mayhem. Imagine the Stone Cold Steve Austin entrance, but the shattering glass is a glass ceiling.

It was all very nice to see all these people from different walks of this country come together under one roof with the goal of blowing things up outside of the military’s jurisdiction. I knew something was gonna go sideways with this movie since Tom Cruise is lowkey the foremost spokesperson for the military-industrial complex. Like if the armed forces were a person and that person became a really successful used car salesman – you’d have Tom Cruise.

This brings me to an idea more comical and insidious; that Tom Cruise is the military industrial complex. Hear me out: after Top Gun and Born on the Fourth of July in 1986 and 1989, respectively, Cruise plays soldiers or military-adjacent characters. A whopping 22 credits spanning 30 plus years. Narrowing it down to just the Mission: Impossible movies, the amount of real-life military tech used in those films is mind-boggling. Add to that, Cruise has a license for almost all of the vehicles on Bast’s green Earth. Obviously all the ones his characters use. Let me be clear, there’s a man out there in the world with no armed forces experience and more access to those things than any civilian should have.

Media and the Military

Why does this even matter? Didn’t I say Top Gun: Maverick was the bees knees? Well, while the numbers have gone up and down over the years, the 1986 ‘Top Gun inspired a five-hundred percent Navy recruitment spike’ has been debunked. In reality, the bump in recruitment for the US Navy was only around eight percent in ‘85-’86. But that was still a difference of seven-thousand people who joined a branch of military service because they were inspired by Goose hitting his head on the canopy and dying (spoiler?) trying to support Maverick’s hot-headed choices. And if a movie that simplistic can have had an impact of on geopolitics, what does it say about the way the Navy is depending on this movie to boost its ranks? How duplicitous does it feel to know that Paramount and the US Navy are partnered along with the Department of Defense’s ‘Entertainment Media Offices’ to make this movie? How dystopian that recruiters set up tables outside of the individual theaters playing Top Gun: Maverick? Not good over here.

I remember when the Army pulled up to my high school in humvees tricked out with TV screens and consoles with Call of Duty for students to play. It felt wack then, still feels wack to see it play out as an adult. Especially when so much of our countries culture and decision making derives directly from our media consumption of said culture. So yeah, Top Gun: Maverick was a cool movie, but at what cost? There is something continually troubling about the relationship between the armed forces, state-sanctioned violence, and mainstream media. As fate would have it, you can measure the intensity of that relationship by following Tom Cruise’s lengthy acting career.