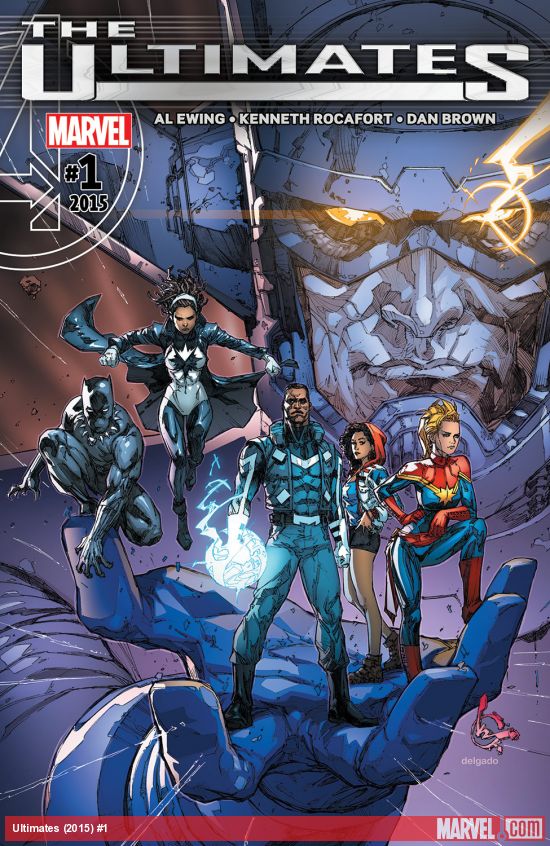 And that atmosphere be so black / people of color! Lawd, we been waiting on this book for the longest and it’s finally here. WE finally got a squad that’s not only powerful, not only a mixture of household names and fan favorites with a cult following, not only where the men are the minority but it’s diverse as all hell! We got Blue Marvel, Black Panther, America “Bawse ass bae” Chavez, Monica Rambeau, and Captain Marvel all on the fucking squad. Come on now, that’s what the fuck I’m talking about. My whole squad full of cats that’ll run a villain’s jays while talking race relations in America, 8th dimension physics, and Netflix original shows. We finally out’chea!

We open up with this book having Adam Brashear (Blue Marvel) discussing the new possibilities of the world post Secret Wars. Matter and Anti-Matter are able to coexist in this universe now as Neutronium (you know that’s going to come into play in a big way down the line) which changes everything. We see The Black Panther’s station of operations at the Triskelion which serves as a base of operations for the Wakandan embassy in the U.S. as well as housing Alpha Flight program for defense and the top flight where universal problems get solved before they become cataclysmic problems for Earth. It’s good to see Black Panther running the hell out of things again. 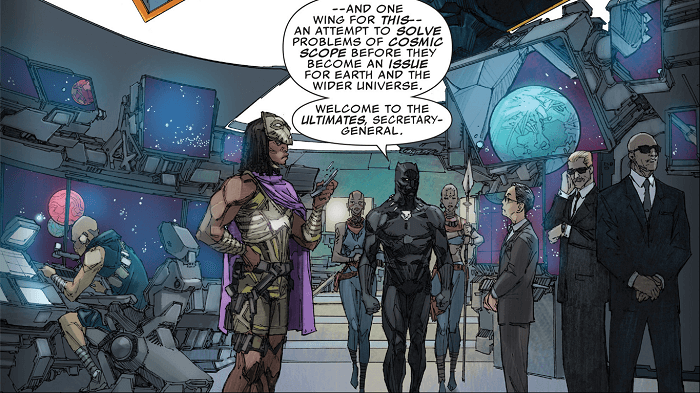 Oh yeah, it’s like that. We get to see Spectrum and America Chavez on a field mission together, which is great because these two characters I feel are very similar. Chavez very much resembles Monica Rambeau when she first came on the scene in her Captain Marvel days. Of course, the difference being that America has been a “Trans-dimensional trouble shooter” since she was a child, so she has more experience with these universal matters and opponents that they are facing, whereas Monica still got those leader & battlefield experience points as well. It’s really gorgeous seeing these two together and I’m looking forward to more of it as Monica is impressed by America battle wise to the point where she actually feels old.

Ewing did a great job putting these two together instead of Monica and Carol, or Monica and Adam. We’re really seeing the team work and interact with different members apart from how we as readers expect it. It’s that difference in the handling of the characters that is enough proof that they are in the right hands with Ewing. 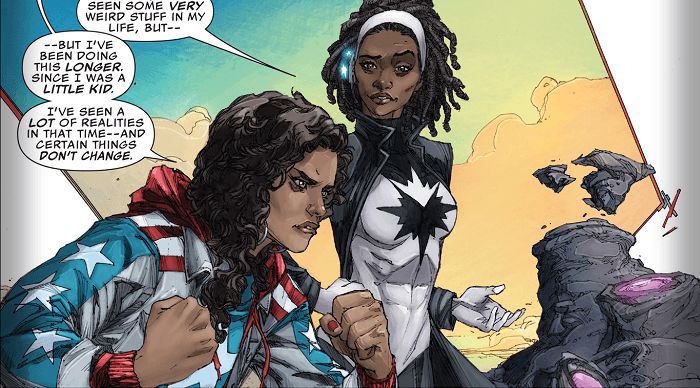 We already know the big bad of this book is Galactus as Captain Marvel and Blue Marvel are outside his door (not waving the four-four) but trying to talk to him. Can we just point out that Kenneth Rocafort draws space gritty as fuck? I feel like I’m on the block watching this intergalactic shit go down and I love it. From his depiction of Neutronium, to the security of the Triskelion, to Chavez and Rambeau cleaning house, Rocafort has a distinct hard edged type of style that I can get behind.

The entire premise of this book isn’t just stopping threats that happen with physical force or violence but by actually confronting these large scale issues, i.e. Galactus and offering actual solutions for their ailments or tought situations. This team is providing a universal customer service basically because they can. This is going to be interesting as we will see this team of smart and experienced people trying to solve issues, but the question will be come of what happens where there is no solution, or when they are perhaps forced to turn to violence.

Ewing seems to have set this team up to be an open and non-secretive version of the Illuminati, but how much of their work will the public know about is another question that comes to mind. What happens when they’re in the public eye, and their hand is forced causing the Earth in part to now be in danger due to their intervention on an issue a galaxy away? There are sooo many questions and so many answers that we can look forward to in the coming issues of this series.

8.9 Neutronium particles out of 10