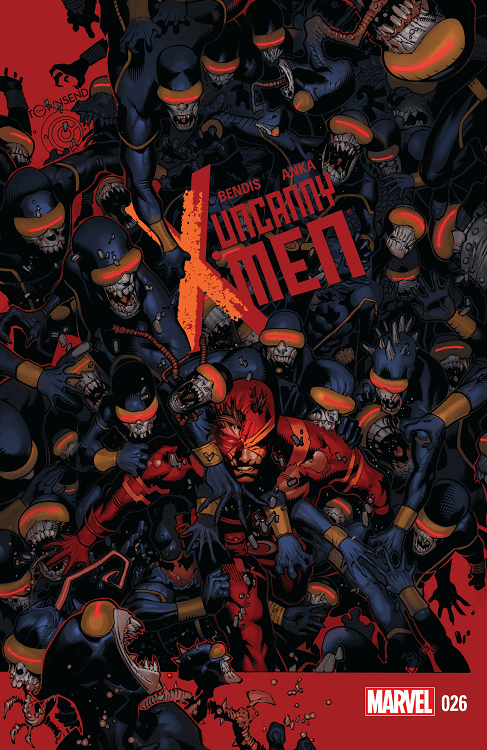 I keep harping on this, but Brian Bendis has really tapped into something special for this current Uncanny X-Men run. I don’t know if he feels some powerful penance to pay for the run before (I’m sorry but Dark Beast? Really?) or what, but this is awesome. Granted, I wish it had come a bit sooner since it feels like Marvel has been burying Charles Xavier for two years now, but “Last Will and Testament of…” is the strongest storyline Bendis has crafted for this series to date.

This issue divided up by two strong storylines. The first is Maria Hill trying to handle the issue of a new mutant with powers unlike anything they’ve seen before (except one or two times before). She really doesn’t want to have to call the X-Men after a humiliating episode in the “…Vs. SHIELD” story arc, so watching her frustration in trying to get it done herself is priceless. Really, any Maria Hill frustration is commonly priceless, but it’s especially so here in this book. But the real treat here is watching the resulting aftermath from the revelation in Xavier’s will. Watching the X-family have it out in a very cathartic manner speaks to anyone who comes from a big, divided family where things are rarely simple. That’s how it spoke to me, anyway. And for those of you who’ve been wanting more focus on the new students back at Cyclops’ renegade school, Bendis even wedged in a very telling training session where the freshman mutants realize they’re not all on the same page and that being and X-Man might not be as glamorous as it looks in the brochure.

Bendis balances all this pretty well, but the familiar ties are a great feel for the kind of material he’s dealing with. It’s a unique signature for a Marvel book that’s sort of reminiscent of the family bonds the Justice League in Identity Crisis. Meanwhile, visually, this book has to returned to GLORY. Kris Anka’s back on pencils and the fundamental difference between his style and that of Chris Bachalo’s is unmistakably awesome. Bachalo’s sometimes muddled action beats to Anka’s clean panels (even when the color palette makes for easily confusing shadings) is just incredible.

Bottom Line: Terrific offering from Bendis who is setting the kind of tone that could make this arc one of the more memorable ones of the past few years of the X-franchise. 9 out of 10