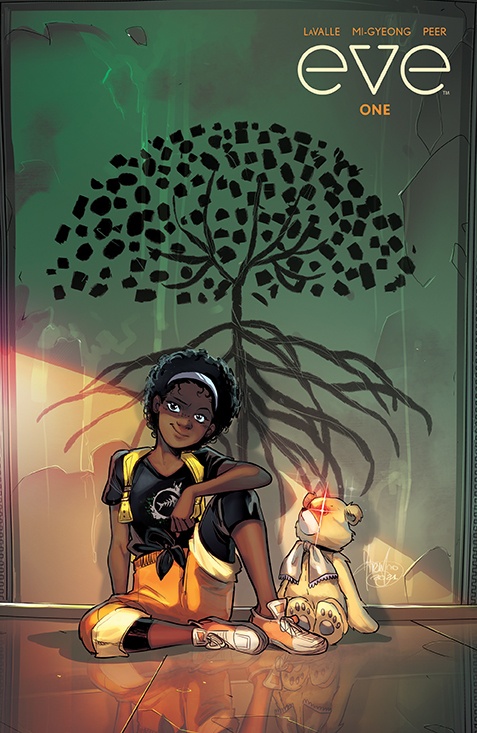 Last week, you may have seen our review of the latest Afrofuturutist series from Boom! Studios, Eve, created by Victor LaVallle and Jo Mi-Gyeong. And this week, we were fortunate enough to sit down with the critically acclaimed author and discuss in details what it took to bring Eve to a local comic shop near you.

BlackNerdProblems: I was first introduced to your work when a mentor recommended an earlier title you did with Boom!, Destroyer, which was a riff on the Frankenstein mythos and a response to the rampant police brutality that has and continues to be omnipresent these last couple years.

BNP: And now with Eve, we have a story that is a response to the omnipresent threat of climate change.

BNP: Do you think that science fiction stories are inherently reactionary to the things happening around us or is that something more coincidental with these two stories?

Victor: Well, I certainly wouldn’t speak for all of science fiction, but I would say my take on it, at least, has been that. I guess that… certainly there is the strain of science fiction that is sort of looking at where we are and thinking about where we might go, right? Sometimes, maybe more often than not, that’s the more hopeful strain of sci-fi. But certainly, there’s also the ones we’re going nowhere, we’re going to the pit, and that’s what they do. In my case, I can only claim for me, it’s definitely me entering into writing sci-fi as a way to wrestle real world concerns while hopefully trying to avoid making it feel, I don’t know, making it feel like a lecture or no fun, you know? I still want these stories to be fun even as they’re dealing with things that are really vital and important.

BNP: So Eric Harburn was an editor for both books. How did he and Amanda Landranco help manifest this book, and direct it, into what’s going to be out in the world as.

Victor: Well, what I enjoyed about both experiences with Destroyer and then this time is that I usually come with an idea, and I have a broad script by script how things will run. I send them over the first pass and then the way they largely have worked with me is they ask questions, right? I really like this method of editing. So, they’ll say, “You seem like you’re this, this idea here halfway through the story. We’re wondering if that might move up so there’s time to tell even more story even just in this opening issue.” Or they might say, “it’s seems like you’re doing this with the virtual aspect. Is that what you meant? And if so, how’s that going to pay off,” and it turns into a conversation with them and what’s been great, in the case with Eve now with Amanda and Eric, they’re really smart.

They love telling stories through comics. So their questions, even when I’m momentarily feeling like I got punch because I was hoping in the false dream of “it’s perfect and we’re going to print it tomorrow,” that’s what the child in me thinks and wants to hear. Hopefully, the more mature version of me gets their notes and goes, “this is going to make it better. And I can see how it makes it better, the blind spots that I have, the things I’m overlooking, the things I’m doing that aren’t necessarily making sense yet and need connective tissue.” That’s where they’ve been amazing. The issues have only become stronger because of that work.

BNP: In a similar vein, what was the process like with Jo Mi-Gyeong when you gave them the script and they made visuals that previously existed only in your head?

Victor: What we did, the place where we had the most back and forth was in the earliest planning stages really when we were coming up with the characters for Eve, for Wexler the bear, and then for the world. And that was the place where Jo sent an early pass and I would say, “I love this but can we do this, can we add this.” I sent over lots of pictures of people, of places. In the case of Wexler the bear, the original designer of the character is actually my 10-year old son. He drew, when he was seven or eight, a teddy bear who has six secret arms that all have deadly weapons on them. I sent that over to Jo and said, “This is the original idea. What would make a seven-year-old crazy with joy would be a teddy bear that also has a scimitar, and a mace, and a flamethrower, can we do that?” While that’s not exactly how it turned out in the end, when you start to see Wexler sort of use all of his abilities…but all of that went to Jo and that was between us and mediated through Eric and Amanda, so we’re all in conversation at that point about how these characters should look.

And when we got to the issue by issue stuff so far, in many ways, I give Jo the script, it comes back, and there are so many things that are so much better than my paltry little script suggested. Then here and there, there are things where I go, “I should change the dialog here because the images is doing all that work,” so I get to do something. And occasionally, it might be, “oh that doesn’t quite fit the moment, idea, or image. Can we adjust it?” It’s been, relatively speaking, a really good collaborative process. At least on my end, I’ve enjoyed it.

Victor: I just use Word. It’s so boring. I feel like I got into the habit in college, you know what I mean? I have lots of friends who tell me “no, use this instead. This is better, more intuitive. Your money goes to a different place.” All these things, and I know it’s true, but I’m such a stodgy old man at this point.

BNP: I feel the same way about Word if that helps. Let’s pivot over to Eve now. In the story-character cycle, this chicken-egg scenario, what came first and how did it iterate from there?

Victor: The thing that came first was actually the journey. I knew that I wanted…I was interested in the Svalbard Seed Vault, you know that over in Norway or wherever it is, where they have all the seeds, or the largest grouping of seeds in the world, so that if anything happens essentially in or to the world, if all the flora dies off, we essentially have spares if we have to restart that line or whatever. I’ve been interested in that as both as a marvel of technology and a such a sad statement on humanity, the idea that you need to save this stuff up because you’re so sure that humanity is going to $#!% the bed is both positive and negative to say the least. I was in love in that.

And journey narratives are as old as time, certainly as old as the story, and I knew it was a thing I was going to do, no question. Really, the last step was who would go on that journey, you know? Eve was that last step, but also in a way, I had the broad idea of the story, but I needed to become a better writer before I could write Eve. I guess that would be the way I say it.

Victor: She was always Eve. There was always a part of me that was, “that’s not very original” on my shoulders like, “come up with something else. Call her…” and I did imagine different names, is this so on the nose that people are going to roll their eyes. But what I also realized is that it’s easy to overthink things as well. There are so many things that are not expected in the story, that it felt like having her name be Eve, people are going to make the association (hopefully a positive association), and that’s okay because it will ground it especially since it’s a story about climate change, the end of the world. People can start to intuit how and why Eve would be her name, and that leaves me room to throw in a lot more wildcards, like a robot teddy.

For instance, I wouldn’t have named her Eve and made the robot companion a snake. That would be too much, right?

BNP: What’s your favorite moment in the first issue? What’s the thing that got you really excited?

Victor: Two moments. First moment is when you see in her sleep chamber and you kind of realize that there are going to be layers to the story, that there are going to be surprises, and the way that Jo did her in her chamber was really really beautiful and very sci-fi, but also weirdly kind of fairy tale-ish and sweet. It hit that tone and will make readers go “oh, okay, this is more interesting than I thought.”

And then the last page, when Eve and Wexler are looking out and you see…I feel I don’t want to ruin it for people, but you see where they are. It was my Planet of the Apes moment and that was fun to see how Jo did it.

BNP: Any advice for any Black, Indigenous, and other People of Color writers out there?

Victor: So, there’s one long history that is invisibility. And after invisibility, there were just portraits of people who were just negative stereotypes. Helpers, villains, savages, things like that. Sometimes, I feel like the idea creators sometimes have, the way that I counter those old negative images is that I make perfect characters now. I make characters who are flawless, perfectly positive to counter the perfectly negative.

In my opinion, that is just as dehumanizing as the negative. Because it doesn’t speak to the truth of what all of us are, which is heroic but also villainous. Cowardly and brave. Ridiculous and also profound. At least for me, when I think what I wish there was more of for non-normative characters, I wish they were messy, complicated, confounding, and human. That would be my advice. Lean into that rather. Nobody likes goody-goodies…that’s me personally. But perfect characters aren’t the antidote to negative portrayals in my opinion.

BNP: Alright, last question, this one I always ask because I’m never sure how people will answer, but what’s a piece of media you wish more people knew about? Not necessarily your favorite, but one you think deserves more attention or general awareness.

Victor: Well, I mean… I really don’t mean as a cheap plug, but I wish more people would watch Shudder, the horror streaming service. They just have so much good stuff on there, and if I could say even more, one of the things I admire, one of the things I really enjoy about Shudder, is that they are clearly doing a lot of work to get non-US horror on the channel. I have really enjoyed for lack of a better term, all of the international horror I’ve had a chance to enjoy through that service.

I know horror, even though it’s popular, is its own niche so maybe everyone who loves horror already has it, but a lot of the other services have horror you expect, but this one is like “You didn’t know you wanted this Argentinian, one room, one person horror story, but you do” if you love horror.

I’m really not employed by Shudder, so that is a sincere recommendation.