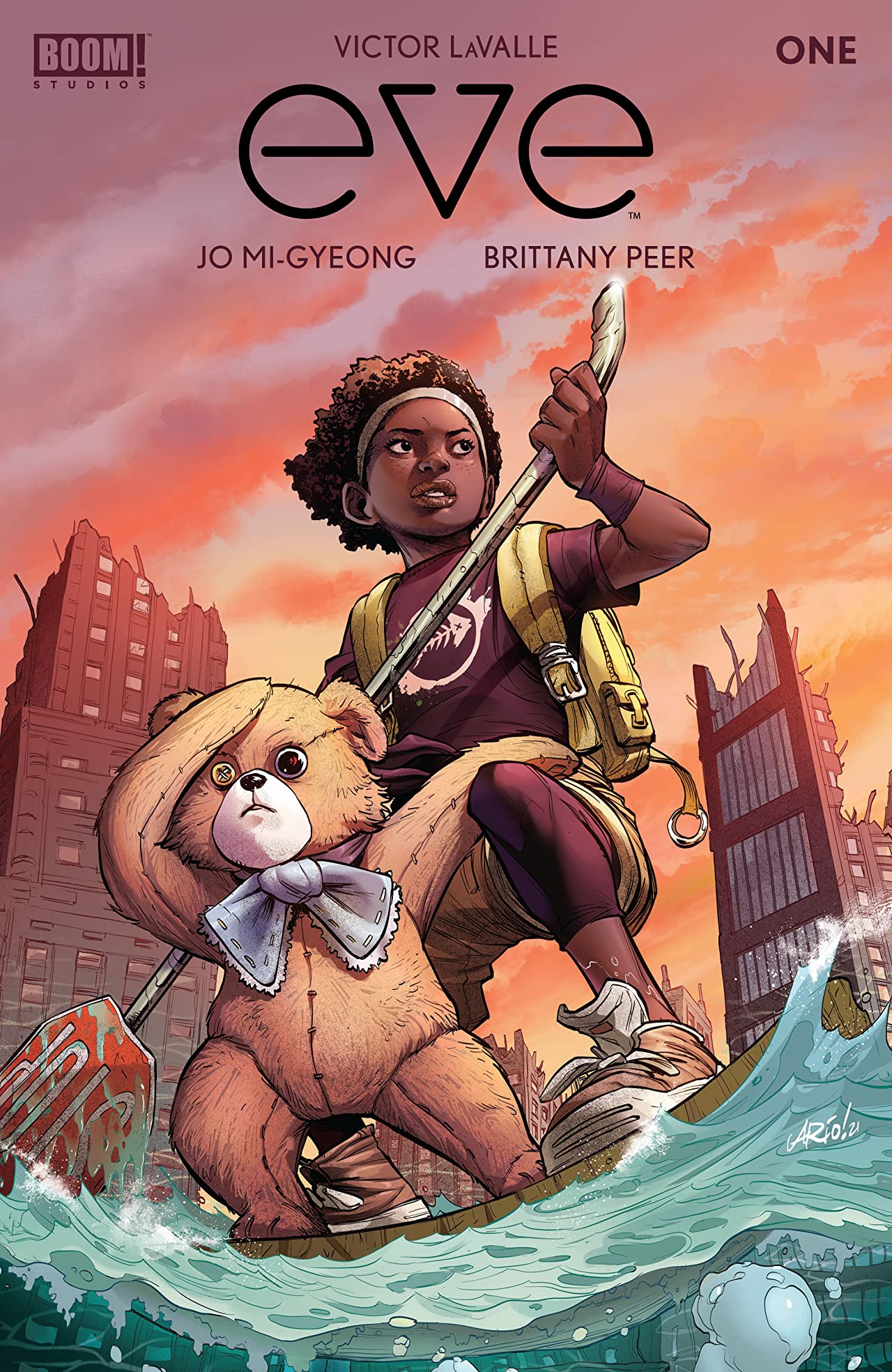 I think I was in middle school when I heard about the general concept of “climate change” and as a child, I don’t think I had a full conceptualization of what it actually was because it’s a difficult thing for a child to grasp. That the collective actions of the human species have managed to damage the Earth, something that’s been around for a time that is almost unfathomable to process, after being on it for what is virtually a blip. Even as an adult, it’s still a tough conceptualization, although for different reasons, namely: why am I being told to alter my life style drastically when corporations and companies who actually hold sway in changing the global atmosphere act with seeming less caution than I do with recycling. It is with this framing that I sat down to read Victor LaValle’s and Jo Mi-Gyeong’s Eve.

In typical young adult science fiction fantasy, the titular character of Eve is introduced with an unbridled enthusiasm and blissful nature. Mi-Gyeong’s artwork is absolutely stunning from the first page, and continually impresses throughout the issues with gorgeous backdrops and animated character designs. And LaValle gives her ample opportunity to show off, having the story travel through a wide variety of landscapes and spectacles and one of my personal favorite tropes in fiction, the stuffed animal companion that’s more than your typical animal companion.

Eve‘s basic narrative follows a familiar arc if you’ve read prior climate change fiction before. The world has been irrevocably altered, and it’s up to Eve to try and fix the world. The differences are small but notable. Eve hasn’t been trained to save the planet. There is not an immediate antagonistic force outside of the harsh environment. It’s very much a familiar premise but works largely in part to LaValle’s sense of pacing and comedic timing. He captures Eve’s personality brilliantly and conveys a strong sense of wit and direction, and deliberately reveals various things about the world to keep drawing the reader in. There are lots of allegories and references, some more subtle than others, some more obvious, that are littered throughout the first issue, that all make for a strong foundation, and Mi-Gyeong’s artworks sells the world.

I liked the first issue of Eve, and I appreciate the general Afrofuturist vibes and the charm of the main character. I think there are a couple more anchoring details that I would have appreciated to fully vest me into the story, but given that this is a 5-issue mini-series, I’m willing to stick around and see the contextualization that the second issue will provide. Eve has a lovable protagonist in a prescient piece of work, and it’s going to be an interesting venture for sure.