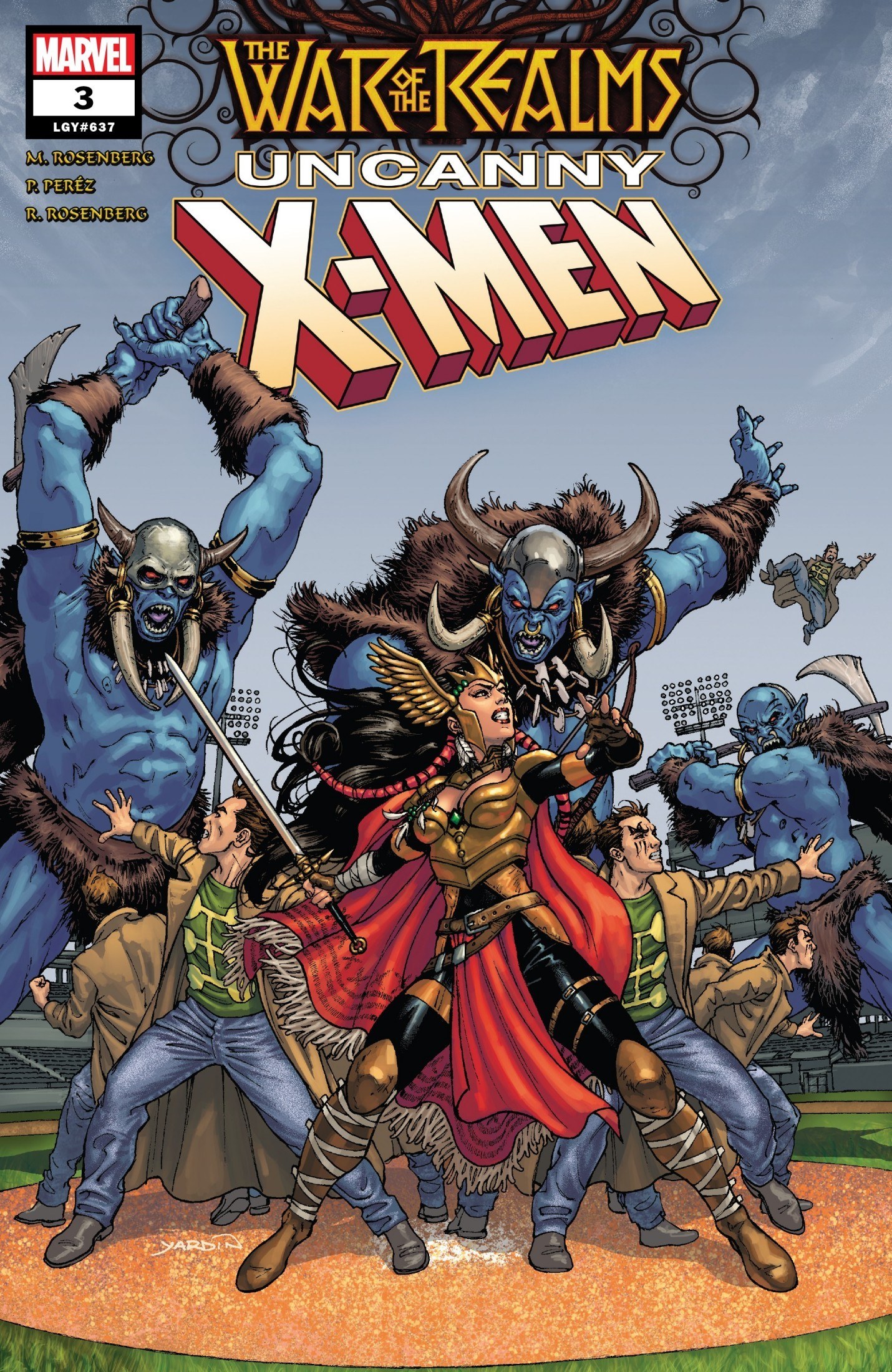 “Wolves get uneasy when one of their gods shows up.”

Without the Avengers or any other heavy-hitters in sight, the X-Men hold their own against constant siege. Malekith’s Bifrost giants and packs of hellish wolves led by Sabretooth square off with Cyclops, Havok, and an army of Madroxes over a baseball stadium fortified with a wall of cars and full of civilians.  Outside, prodigal son Sunspot, Mirage, Hope, and Karma are in search of Wolfsbahne and Magick. Meanwhile in Stark Towers, Magick is held captive and powerless by Hrimhari, Wolfbahne’s revived husband and “wolf-god.” Previously, he made a deal with Enchantress. If he delivers Ilyana without Rahne’s interference, the resurrection of himself and his son is assured. Typical family reunion, right? 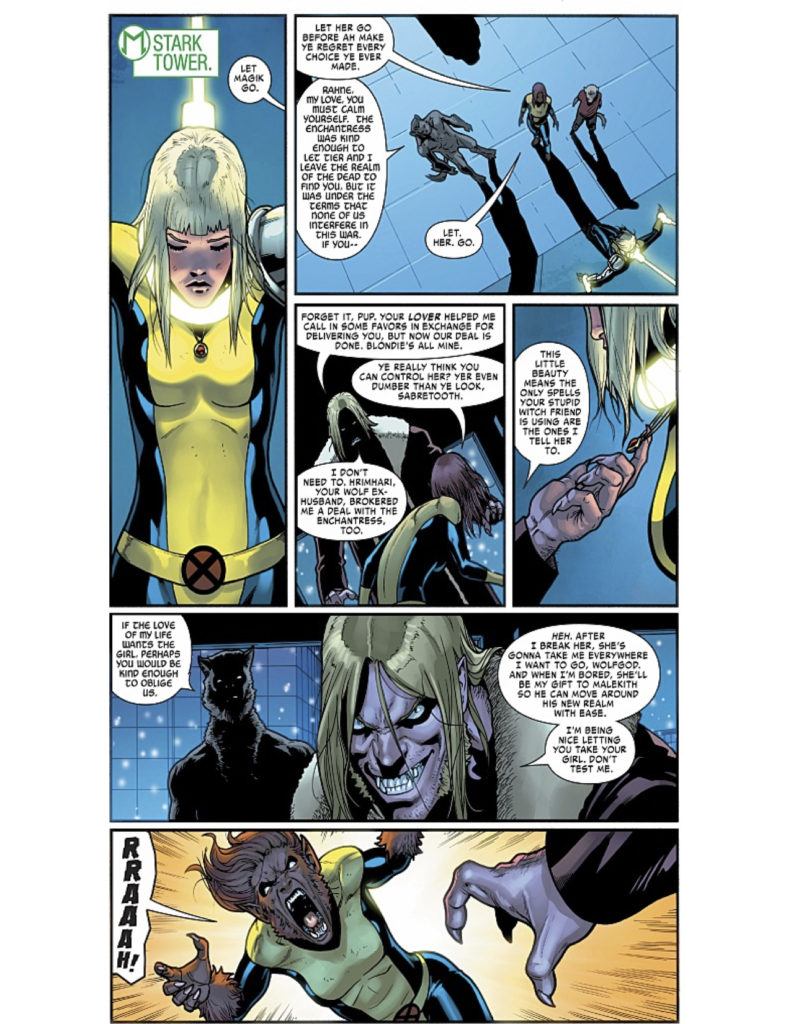 The X-Men are the hardest working team in Marvel canon.  At this point, they should have more than enough on their plate – a publicly available vaccine to suppress the X-Gene, the apparent death of the majority of the X-Men, and the One National Emergency office rounding up mutants for experimentation and weaponization. Even then, they still have time to help protect human civilians on what appears to be Midgard’s last stand.  When the issue begins, Ilyana is powerless and on the verge of becoming Sabretooth’s personal limbo chauffeur. Clouded by her loyalty to her friend and the shock of her family returned from the dead, Wolfsbahne defies Hrimhari and takes on Creed. When Sabretooth gets the upper-hand on Wolfsbahne, however, her husband steps in and calmly throws Creed out of a Stark Tower window.

On the ground, Mirage, Karma, Sunspot, and Hope find themselves surrounded by wolves until Hrimhari arrives with Ilyna and Wolfsbahne in tow. Finally reunited, the entire team makes their way back to Fort Syndergaard – the baseball field held by the X-Men.  Happy reunions never last long for the mutants as a horde of Bitfrost giants throw themselves against the fortifications of the stronghold. Overwhelmed by the giants and the appearance of Sabretooth as well, Sunspot implores Ilyna to transport the civilians away. Her powers are still suppressed by a collar that Sunspot desperately rips from Ilyna, hoping to implode it peacefully with his powers. Instead, his bravery and naivete cost him much more than he expected.  In the fallout of the explosion, Magick, Karma, and Mirage use a simple sleight-of-hand illusion to fool Sabretooth into leading Malekith’s armies into limbo. Alone, he faces a royally pissed off Magick. She wastes no time in slaying the beast. When the battle settles, Mirage stands overwhelmed with her task as a Valkyrie to usher her fallen comrades to Valhalla. 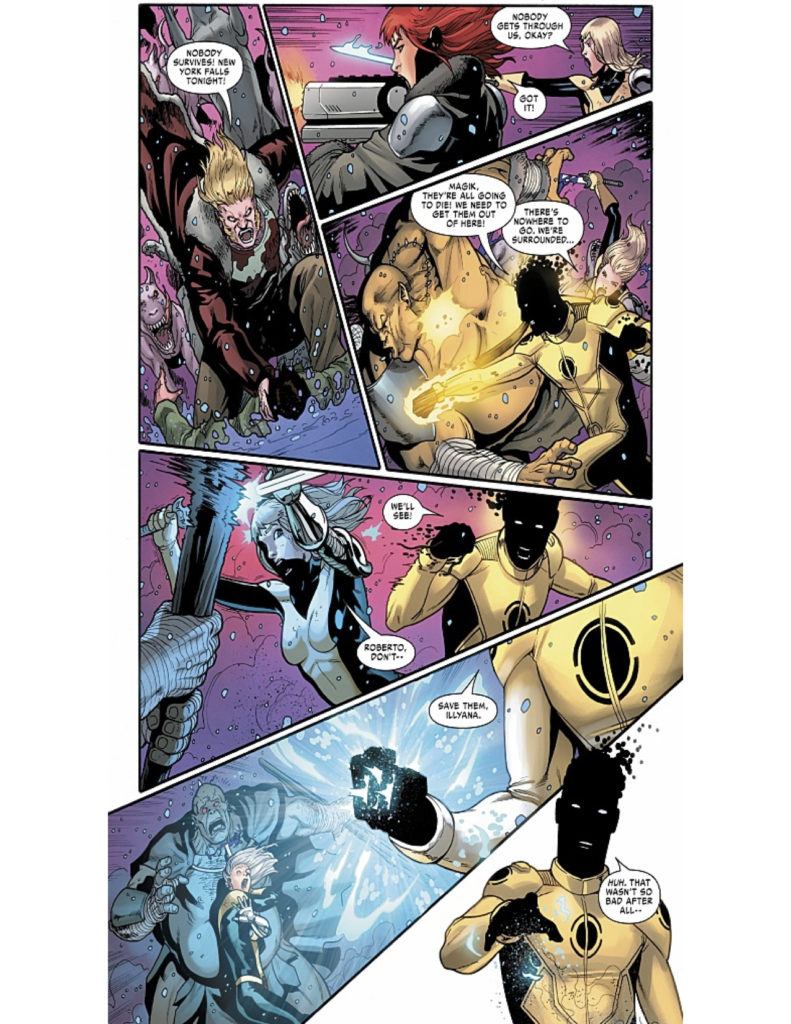 As an unfortunate byproduct of conglomerate synchronicity, the real shortcomings of reading X-Men comics rise to the surface. The most frustrating factor, of course, lies in how this series is supposed to be read: wedged between Uncanny X-Men #15 and #16. The War of the Realms tie-in sandwiched by the flagship title shipping bi-weekly kills any sense of organic immediacy or actual stakes. Make no mistake – when [SPOILER]goes up in an atomic explosion to get the rest of the team to safety, it’s a big moment.  The emotion, however, feels hollow and merely like another mutant death checkmark.  The side-story involving the resurrection of Rahne’s family adds some emotional weight in her decision to leave the X-Men in Uncanny #15. Re-reading that issue, her reasons for leaving do not convey that same loss. Overall, while the choices feel illogical and cold because of the continuity, the action hits in all the right places. Perez renders some beautiful splash-pages to capture the moments with real energy.  In the climactic battle, Rosenberg drops a teeth-clenching scene for Ilyana’s revenge. She decapitates [SPOILER], kicking the severed head through a limbo portal.  Yes, Magick went for the head AND the dropkick to seal the deal.

While the issues ended the series better than it began, pulling the X-Men into these company-wide events when they are in the middle of TWO major story arcs of their own is never a good idea. Aside from the two major deaths in the final epic battle, there are few, if any standouts that make this series a must-read. The fact that these issues are tucked inside the legacy numbering just means some fans might have three gaps in their Uncanny X-Men collection.