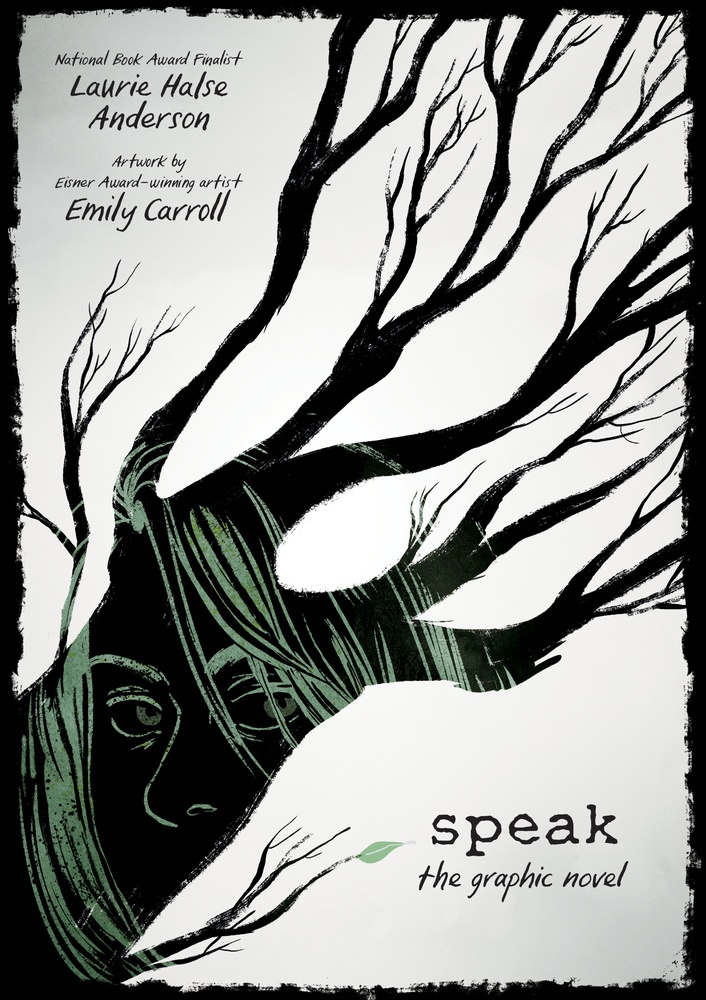 First published in 1999, Speak tells the story of a teenage girl named Melinda who is sexually assaulted at a party the summer before she starts high school. She becomes selectively mute and alienated from her family and friends until she learns how to address her trauma and express herself through art.

One of my favorite books as a teenager, Speak has been censored and banned for daring to address such sensitive issues as sexuality, assault, and rape culture. By the same token, it has become required reading for young adults struggling with their own voices, identities, and experiences with bullying and assault. Speak was my earliest encounter with sexual politics and addressed rape culture in a way that wasn’t fear-mongering or pedantic but real in its understatedness — the unfortunate fact being that these attitudes and behaviors have pervaded our culture at large and are part of our everyday reality. When I read Speak as a young adult, the book struck me with its voice;  despite the fact that its protagonist fails to speak throughout much of the book, Melinda’s voice is ever-present in quirky, sarcastic internal monologues that create a character of richness and depth. Though she spends most of the book feeling like she’s lost her grip on her sense of agency and control, Melinda slowly regains herself on her own terms — those terms being her artwork, rife with symbolism about her experience.

On the NYCC panel, Anderson discussed her own journey with the book, the main character’s story being her own in a sense; herself the victim of sexual assault at the age of 13, Anderson spoke of the book as a way for her to put words to her own emotional experience. Blunt, fiercely political and full of the same wit that pervades her popular book, Anderson bemoaned the fact that despite the strives we’ve made as a culture, we’ve also taken steps back in the ways our culture refers to gender and toxic masculinity. Nearly two decades later, Speak is still relevant, and Carroll, Eisner Award-winning illustrator and author of Through the Woods and His Face All Red, has inked the original story.

Carroll said that in depicting the assault, she took cues from horror comics, emphasizing the sense of terror rather than casting a gaze on the act itself. The aesthetic of the scenes depicting Melinda’s own artwork and difficult moments in her story were influenced by Melinda’s emotional state.

Anderson said she hopes that this new graphic novel adaptation of Speak (which was also adapted into an over-dramatic 2004 Lifetime movie starring a young Kristen Stewart, by the way) will introduce a new readership to her book.

Speak: The Graphic Novel is forthcoming from Farrar, Straus and Giroux in February 2018.