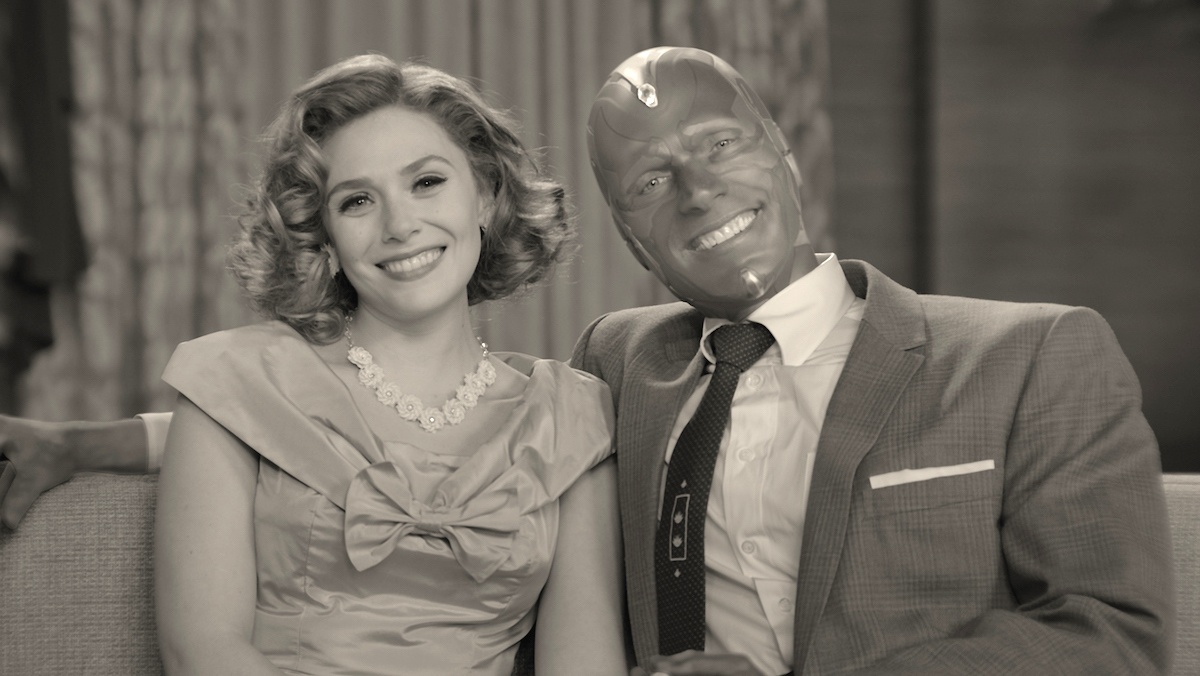 After 11 years, 23 films, and billions upon billions of dollars earned, the question was “Where does Marvel go from here?” With the conclusion of the Infinity Saga, there was a need to change up the formula, stretch their creative wings, and trust that audiences could accept crazier storylines and premises so long as the quality didn’t dip. And with the first two episodes, I believe the WandaVision will be the breath of crazy fresh air we need.

Infinity War and Endgame didn’t exactly leave Wanda and Vision in good places. Vision was dead, and Wanda Maximoff was in a dark place with the loss of her love. Where the show picks up is part of the mystery, Wanda and Vision move into a new neighborhood and try their best to fit in and hid their powers from their unsuspecting neighbors. In these first two episodes, the main story is just Wanda and Vision living a peaceful life in a quiet suburb with a crazy cast of friends and neighbors, and it’s actually quite charming. Elizabeth Olsen and Paul Bettany are really having a ball in this show, and it’s really nice to see the characters of Wanda and Vision able to let loose and just love each other.

The “Wacky Cast of Neighbors” seem to be having just as much fun! The Boss and his wife, the co-workers, the nosey neighbor and the “Queen of the neighborhood” all feel right at home in a 60s sitcom. Kathryn Hahn, playing the neighbor and friend to Wanda, really chews the scenery every time she steps on camera, and I’m loving what she brings. There’s also an undertone of mistrust with everyone. You feel like someone could be the cause of the mystery or even unwilling participants. It’s hard to tell this early on, but I’m excited to see where it all goes.

So far, the shows strongest aspect is the sitcom angle. It doesn’t play it for laughs but rather leans in hard to the premise. If you’ve never seen a Marvel movie before, you would think it was an actual old-time sitcom. Everything from the acting, to the storylines, right down to the laugh-track is spot on with the style of the time. Without even explaining, episode 2 jumps ahead into a later sitcom style than the first, and it seems each episode will feature a different sitcom style. It’s because of this that the mystery aspect of the show is (forgive my pun) super impactful. It’s just a regular show with a Dick Van Dyke Show storyline until you hear a some static on the radio, see a spot of color where there shouldn’t be, or characters just don’t act right. We know there’s a mystery, but the show isn’t afraid to hold it back, it’s subtle and a bit unnerving at times. The first episode is real light with the mystery aspect, and the second episode shows a bit more. I suspect each episode will ramp up until it dives head first into it, and with only 9 episodes this season (or series? not sure how they plan on doing this), they seem to have found a good pace.

Trickling in are little Easter eggs and name drops that are sprinkled throughout. There’s an eerie commercial within the show that presents products with name and logos familiar to Marvel fans and the symbol for the S.W.O.R.D. organization reminding everyone this is still a Marvel product. It’s fun to keep your eyes peeled for these drops, but they never pull focus from the story or are overly overt. You don’t have to watch previous Marvel properties to understand this show but for everyone else it’s extra frosting on the cake. We’ll see how this continues, but it really does seem Marvel found its sweet spot in connecting its universe. Marvel has stated this show will connect to its upcoming Doctor Strange movie, and I’m eager to see exactly how it does that.

If there was anything I could complain about, it is that these 30 minute episodes are just a bit short. It’s a minor complaint, I just want more. And I would actually argue that the weekly format works better for this show than bingeing would. It allows the viewer to sit on the mystery aspect and ruminate on it. Sadly, gone are the days of gathering around the water cooler, but I think it’ll be fun to zoom online with friends and discuss what you think is going on. The online water cooler, so to speak.

The first two episodes of WandaVision was an experiment that, so far, has paid off for Marvel. The show is keeping the superhero genre fresh and entertaining while providing an intriguing mystery that viewers will be engaged with. Elizabeth Olsen and Paul Bettany are really bringing something new to these characters that the movies didn’t allow for them to bring, and so far are proving that Disney+ is a great way to expand upon these characters. If the show stays on this course, it’ll be a great first outing in this format and a good sign for the future Marvel properties.