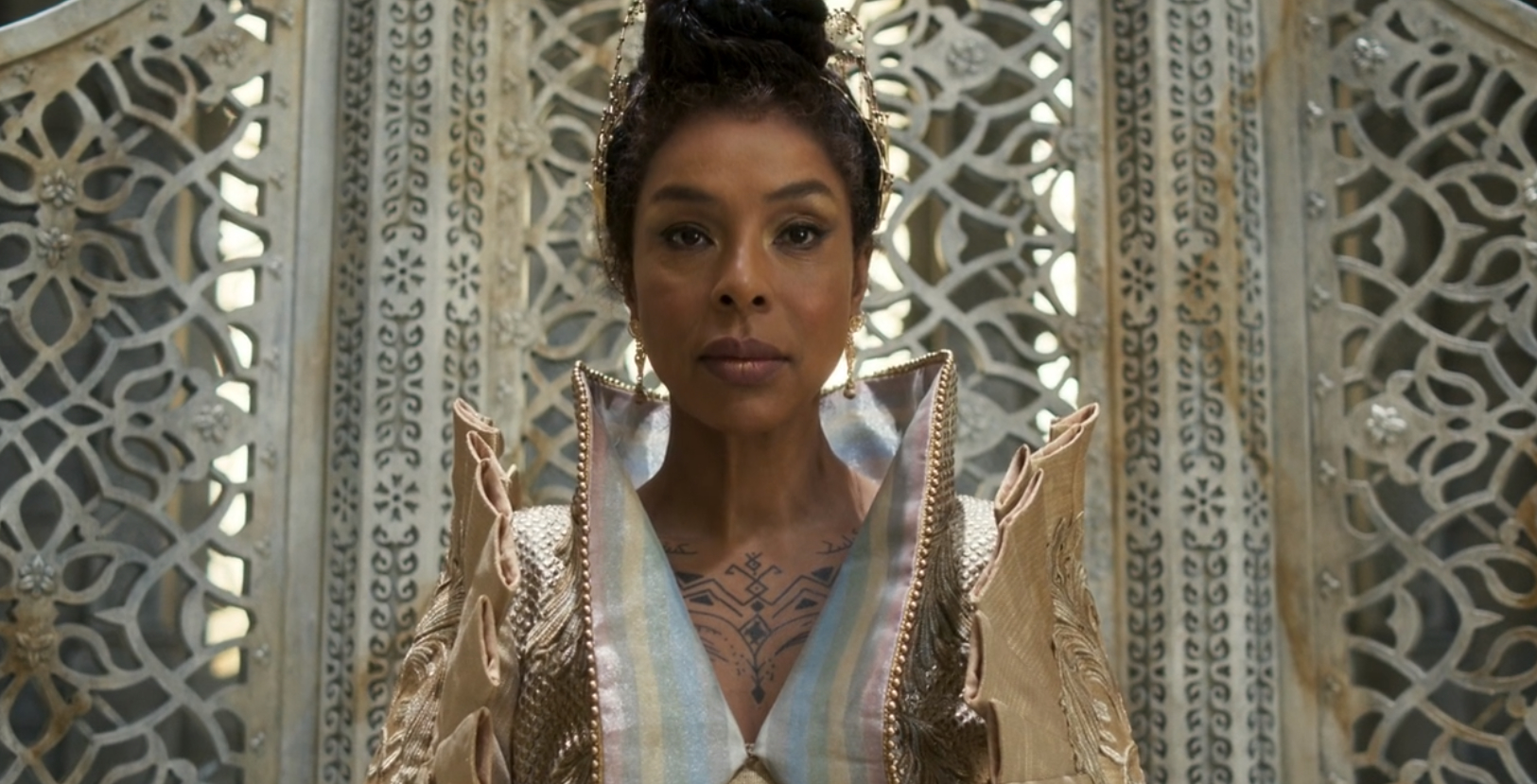 ‘Wheel of Time’ Recap: Episode 6 “The Flame of Tar Valon”

Quote of the Episode: “She comes! The Watcher of the Seals, The Flame of Tar Valon, the Amyrlin Seat.

AHHHHHH! I don’t know what to do with Wheel of Time episode 6. It sometimes feels as if the show is flying through the books only to get stuck on a specific part for wayyyyyyyy too long. We only got 2 episodes left, and this was the first episode where I wasn’t satisfied at the end. I felt like I needed another 35 minutes. One of the things that needs to happen in order to keep the Bookwyrms from turning into Bookcloaks is to give us more anchor points. I know that the tv show has to adapt the books because Robert Jordan was a voracious writer, and there’s no way to just make a 1-1 adaptation without it ending up 14,000 episodes. But we need to have our anchor points so it doesn’t feel foreign, and so we can keep the faith that our major plot points are going to be taken care of. For example, when I saw Shadar Logoth, I didn’t care about the fact that we didn’t meet Thom until after they left the Two Rivers. Shadar Logoth was one of my anchors, and they did it so well. They earned some grace. I’m hoping as the series goes on that we get more of those anchors. Ok, let’s jump into the recap!

REMINDER: Spoilers are Elaida’s sneaky link in the North Harbor, and I am Moraine ready to tell the rest of the reds & blow up the spot.

We start Wheel of Time episode 6 with a flashback scene with young Siuan Sanche. For the Bookwyrms, seeing her fishing was kinda awesome, and it was nice to get a taste of her origin story. One of the common themes we’ve seen over and over is the limits of the one power. Sure, Siuan can untangle a knot, Moraine can warm some water, but it doesn’t keep Valda from cutting off Aes Sedai hands, it doesn’t keep Trollocs from invading and chasing the EF5 up and down the mountains, and it doesn’t keep Siuan’s house from burning down. The parting scene between Siuan and her father was well done and heart breaking. I think this scene is the perfect counter to some of the critics who have said the acting in Wheel of Time has been wooden. Papa Sanche embodied the complicated emotions of a parent who is in a space of mournful peacefulness, because they have to send their daughter away for their own safety.

We scene switch to the present day. I’m really loving the dress uniforms of the sisters when the hall is in session. It was one of those things I hadn’t thought of while reading the series, but of course they would have separate uniforms for “away games” vs. “home games.” Can’t be rolling up to the hall of the tower looking dusty and ragged from the road. Seeing the full hall in session was an awesome moment, only to be eclipsed by Siuan Sanche’s judgement of Logain. Her quiet, surgical evisceration of Logain Ablar was laser guided in its precision. If it’s the release of death you seek, you won’t find it here no matter what foulness you spill. You’ll serve as an example. My only quip with this scene was that I thought the Amyrlin’s rainbow stole would have been brighter and bolder.

The next scene is that we find out that Liandrin is a snitch. I hope to see her get stitches at some point. I really dislike Liandrin. She isn’t quite Jeoffry Lannister (Baratheon) unlikeable, but she is eclipsing Joaquin Phoenix’s Commodus from Gladiator. I am enjoying disliking her.

Moraine finds out that Mat is sick with the Omicron strain of Shadar Logoth and forces him to get a double vax booster shot on the spot. This is a place where the show diverges from the books, because in the books it takes a group of Aes Sedai to heal Mat, I’m curious as to why they made this change. We end this scene with Moraine smacking down Nynaeve. And then we are back to Moraine and Maigan, who apparently is a leader among the Blue Ajah. Side note, it was at this moment, I knew that Wheel of Time episode 6 was the Moraine episode. All Moraine all the time.

We transition from bathhouse to bedroom and apparently Siuan isn’t Moraine’s enemy after all. Some BookCloaks were quite angry about this interpretation, but it is cannon that Siuan and Moraine had a relationship at one point. I think it was a clever way of showing the connection between the two. They were hiding something in the books, and I think that’s exemplified through their affair in the TV show. I loved this entire scene, the way Siuan’s face was anguished when she said “I thought we’d have more time” was damn good.

We get another Loial scene that’s way too short. I love everything about his character, how he’s portrayed, and I hope we get more Loial in the series. I really enjoy the show, but I’m still a Bookwyrm. I haven’t yet sworn my allegiance to the Bookcloaks, but one of my complaints is the lack of Loial. Amazon gave us 8, 1-hour episodes, and I feel like we needed 12, hour and a half long episodes. I’m unsure of how they are going to wrap everything up in the next 2 episodes. We still haven’t gotten enough backstory on so many characters (Loial is one of them), but right now we just don’t have the needed screen time.

Next, we run over in time to see Siuan Sanche giving a classic Samuel Jackson “end of the movie” rising, “call to action” monologue. “The Wheel does not care if you are young or afraid petty or weak, it certainly doesn’t care what you want, the wheel calls you to this whether you can bear it or not. The last battle is coming!“ All Siuan needed was a black eye patch, bad wig, or end the speech with something about snakes on a plane and we could of rolled credits. Go ahead, re-read that last sentence in Sam Jack’s voice. It works!

We switch over to Moraine in The Tower getting judgement. Granted a judgement that her and Siuan cooked up after a night of listening to Janet Jackson’s Ropeburn, but a judgement nevertheless. I understand why they needed to introduce the oath rod, but I don’t like how they did it. I think they should of left the oath rods for the Aes Sedai ceremony, and I would of liked to see it “settle” on Moraine a little tighter. We finish this scene with a Klingon Discommendation exile ceremony. I was just waiting to see Chancellor Gowron to show up with a Bat’leth.

We end with Moraine opening The Ways so the squad can get to the Eye of the World and fight the Dark One while he’s still weak. I don’t understand the reasoning behind making the ways open with channeling as opposed to the explaining the Avendesora leaves. I hope they clean that up a bit, because otherwise it doesn’t explain why Loial is there. I do wonder if we will get a Machin Shin appearance next episode. For some reason, Mat decides to hang back, and honestly I’d rather have seen a wall drop on him, because this made no sense.

With the end of Wheel of Time episode 6, I really need these last 2 episodes to be 5X Dylan hot fire, because I’m a bit worried. Episodes 1-4 started off very strong, even with some of the changes, I saw how they fit within the grand narrative. I’m starting to have my doubts, and I think the problem is… I need more book anchors. I need to see more things from the books that anchor me into the story, so the other small changes don’t loom so large. That, and we could all use 300% more Nynaeve stabbing people. Episodes 5 and 6 seem to struggle a bit, and now with just 2 episodes left, I’m concerned about how they plan on landing this plane. The show has struck a flock of birds, lost power to an engine, and I’m looking down at the Hudson River and hoping that Captain Sully is behind the controls. I guess it’s time to roll the dice.