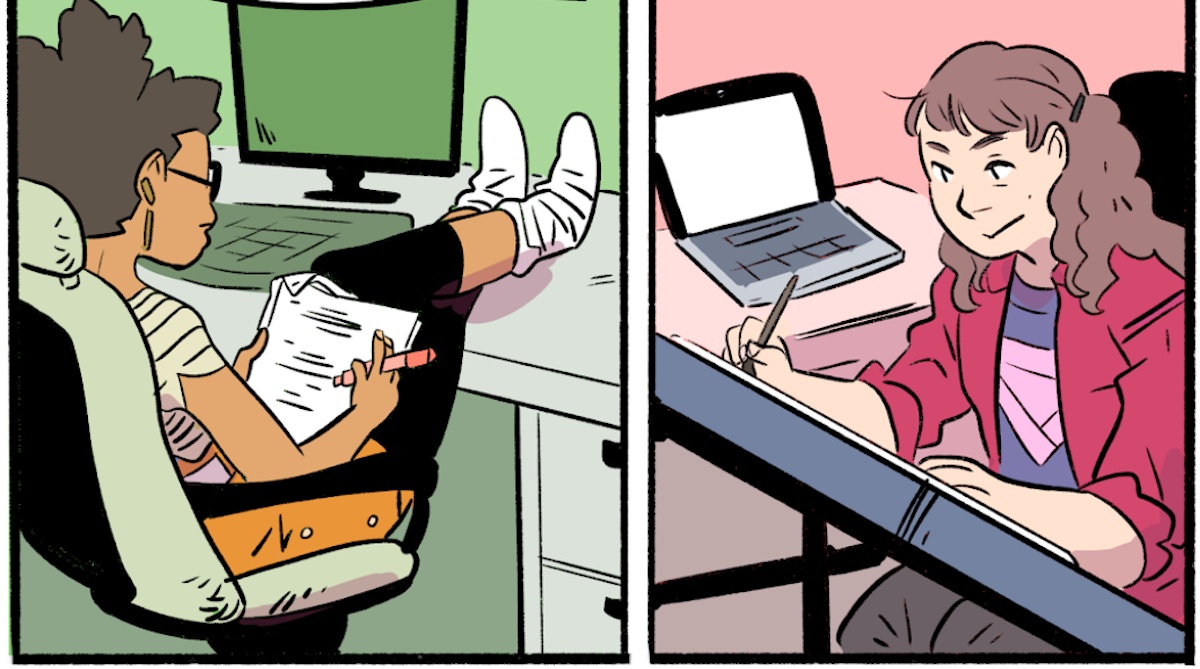 In early May, editor, educator, and Heart of the City cartoonist Steenz, and writer, artist, and Z2 Comics Senior Editor Camilla Zhang dropped the Standard Comics Script, an attempt to provide writers with a foundational entry point into writing scripts: to not only help them to get their ideas out in a succinct way, but it also streamlines the process for everyone else in the comics-making process.

Making comics is all about collaboration. Nothing falls on one person’s shoulders. Since everyone’s work is predicated on the writer’s script, the Standard Comics Script exists in part to just make everyone’s job a whole lot easier.

As someone who is still very much getting started in this industry, figuring out how to write a comic script is something I still struggle with. It hasn’t stopped me from completing a script, but I’d be lying if I told you my lack of knowledge or direction in this process at the beginning didn’t slow me down at times.

While talking to Comicsbeat, Steenz and Zhang mention how in other mediums like screenwriting or television writing, there’s one streamlined way to write a script, and if you don’t adhere to those guidelines, your work won’t even get looked at.

But there’s no streamlined way to write a script for comics, and whenever you ask someone who writes, they’ll just give you insight into how they do it or tell you to figure out what best practices work for you. While the liberation of that may be nice for some, for those that are just trying to find their footing in this medium and tell dope stories, it can be daunting to not have the reassurance that what you’re doing is the right way. Being told that there is no right way is kind of maddening if I’m being honest.

The Standard Comic Script aims, and in my opinion succeeds, in breaking down those barriers and providing something useful for everyone who works in this medium, in an attempt to make the process of creating dope comic books just a little bit easier.

Putting it to Use

I tried it out by writing a comic using the Standard Comic Script template myself. Before this, I’d written about 8 stories that actually made it from script to completed comic (as I said, still getting started), and the script I wrote using the Standard Comic Script was finished in record time for me. I wrote a 6-page story in like an hour and a half.

It’s a very simple story that could still use a little TLC. I’m in no way saying it’s good or ready to move forward to the next stage, but I’ve never brought a story across the first-draft finish line, short or not, in such little time where I actually felt like it was solid and readable. That’s got to mean something.

My story is about an asteroid born out of an exploding planet that is on a collision course with Earth, and I likened it to someone getting kicked out of their apartment. The story is narrated by the asteroid, and his main goal is he just wants a new home: Earth. That’s not going to be good for anyone.

What made this such a smooth process for me was that there was so much less I had to worry about when writing. So often when I sit down to write, after staring at the screen for three hours searching for motivation, the thing that always slows me down is formatting my script. I’m one of those people that have found a formula that works for me and typically those I work with, but that doesn’t mean that it doesn’t sometimes cause me to have to think more than I should have to.

Using the Standard Comic Script, and simply using it as a template to follow, made the writing process infinitely easier. I wasn’t staring at a haunting blank white screen anymore. I was staring at a skeleton. Still kind of scary, but it felt more like I was filling in blanks rather than making something out of absolutely nothing. In reality, I still was doing that, but seeing each part of the script that needed to be there just helped me focus on the important aspects of the story itself, instead of getting bogged down by small little details.

Part of what makes the Standard Comic Script so helpful is the color coordination. I know this sounds a little silly, but I can’t believe adding a little color went so far into making this process for me, the writer, a lot easier. It makes sense why it would make it a less stressful process for those who come after me, but as a writer, I found that focusing on different colors for different areas of the script kept me much more engaged and helped me place where certain things needed to go.

I often struggle with where or how I should address notes for a letterer. Well not anymore, because everything a letterer needs to see is centered, and highlighted in purple or green in the Standard Comic Script. Now I don’t have to waste precious brain energy figuring out if I need to leave a note at the end of a panel description in bold, or right next to the narration or dialogue. That energy can go straight to the storytelling decisions that I need to make, which are hard enough on their own, but next to impossible when weighed down with figuring out logistical stuff.

From the letterer’s point of view, this has to be really nice. Picking up a script and knowing your work stems from two colors only, and you just need to look at the centered margins? It’s all right there in front of you and you can get to work a hell of a lot quicker.

Of course, the Standard Comic Script isn’t the first script to use color coordination, but for me, someone who likes organization but often lacks the imagination or insight to implement it on my own, I appreciate that this template is as accessible as it is. Without it, I probably wouldn’t have thought to color coordinate my scripts until I’d painstakingly written at least 10 more of them. I’m dumb like that.

I love the way the Standard Comic Script lays out the dialogue and narration in the center of the script. Like a lot of the other things in this template, this obviously isn’t the first time a comic script has done this, but it’s the first time, at least for me, that I can see how effective it is.

Up until this point, I would keep all my writing on the left margin, but centering the dialogue and narration really helps it stand out to the reader, who when it comes to comics, is always going to be your editor, artist, colorer, and letterer. Sorry folks, most people aren’t reading comic scripts for fun.

I go to school for television writing, so I’m pretty familiar with writing screenplays and television scripts. Centering dialogue comes pretty naturally at this point, but it’s still something I hadn’t thought about much until now when it comes to comics. I definitely see myself moving forward with this in my future scripts. When you couple this with the color coordination, it makes the script so much more readable, and that’s really the ultimate goal. You don’t want people searching for stuff like a needle in a haystack in your script.

Of course, whenever something new drops, or when a tool to make something easier becomes available, everyone wants to give their unwanted opinions. Things aren’t any different for the Standard Comic Script.

The Standard Comic Script is a template designed to make the process easier for everyone. It isn’t a rule to live or die by. You’re still free to write a comic script any way you want to, so why get mad?

It’s no secret that the comics industry, like basically every other industry, is dominated by white men, so their backlash to something like this is very gatekeepy. Why would you have an issue with making something easier for someone just starting out, or smoothing out the process that the rest of the creative team has to work through?

It’s giving insecurity. Seems like these people are so afraid of giving people the opportunity to learn a craft in a much more digestible way than was readily available, that they’re mocking its integrity to invalidate its effectiveness.

You can still try and write a script like you’re trying to be the next great American author. If that works for you, then do you. But let everyone else do what works for them too.

Comics is about community, not exclusivity. The Standard Comic Script is at the heart of that. If you can’t see that, you’re probably in this business for the wrong reasons.

I know one thing for sure, I’m adopting so much from the Standard Comic Script into how I write comics in the future. Sure, the Big Two (Marvel, and DC) have their own in-house ways to write a script, but not everyone writes scripts for Marvel and DC, and not everyone wants to. And even if you do, the only way to get there is by making your own comics first.

At the end of the day, adopting aspects of this template is going to help you immensely if you’re still figuring things out. If you’re established and you don’t need it, guess what? You don’t have to use it. But in the meantime, shut up.