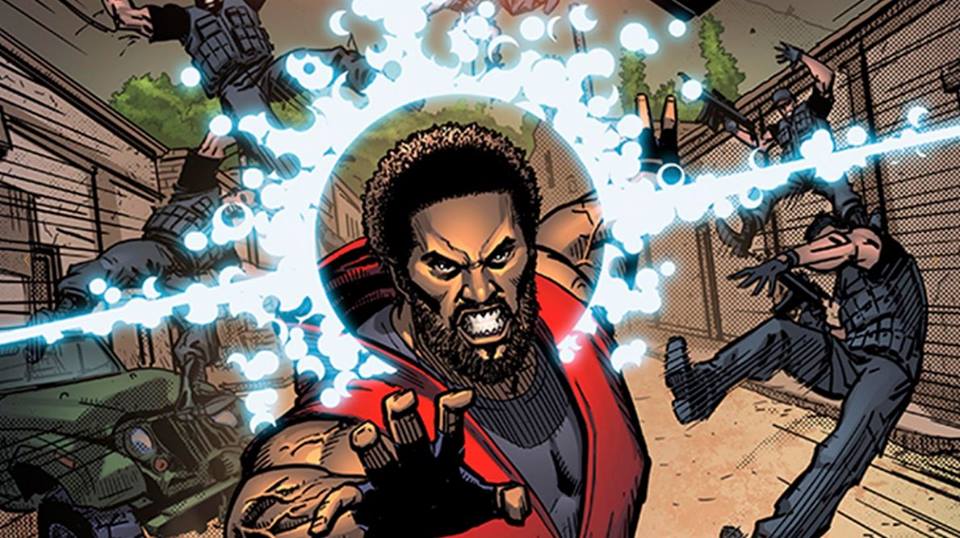 [divider type=”space_thin”]
It happens — sometimes a great comic book series launches and you miss it. You’re an issue or two behind. You’re not perfect. Other times you hear about a new comic and you forget about it, or just don’t get around to buying or reading. Or you may just be someone who is looking for something new to read every month, someone who wants to add to their pull list, or maybe you’re that person in the room who wanted something fresh in the superhero genre of comics. whoever you are, I’ve got something for you: Lion Forge’s Noble.

If you’re unfamiliar with The Catalyst Prime setup, the backstory is this: Astronaut David Powell was on a team with five other astronauts who took on the suicide mission of destroying an asteroid before it could collide and wipe out all life on Earth. While the team succeeded, Dave was affected by losing his memories and also gaining the ability of telekinesis. Back on Earth he is on the run from those who would use him for nefarious reasons, haunted by the family in his memories and working to keep moving and keep going. While he does this he lives under aliases and finds ways to earn his keep and help people who need it, all while his powers grow.

If you needed a tagline of sorts you could go with this: “The first Catalyst Prime title, Noble, will focus on an African-American superhero named David Powell and his attempts to reconnect with his family after a supernatural accident.”

We’ve got Brandon Thomas. Yes, that Brandon Thomas on the sticks as writer, which excites as a fan from previous efforts on superhero comics like Mirenda Mercury and more sci-fi tinged works like Horizon. With what I’ve read of Thomas’ comic book credits I know he’s able to craft really intriguing stories that that are multi-layered and character focused.

With Miranda Mercury, his efforts fleshed a hero who had a legacy on her shoulders due to her very important family and an adversary to defeat, all while a very dire health condition weighed down on her. Outside those properties, I know him from his time on Dynamite’s Voltron comics. It’s a comic that he brought so much life and passion that spilled over to other projects.

I believe in Brandon Thomas, and you should too. I can’t stress how much I appreciate having a Black writer write Black characters in a industry where we’re always finding tone deaf depictions of people who look like us on pages and in panels but that don’t sound like us. It’s comforting to know and see that the first book to kick off the Catalyst Prime line is a Black man written by a Black writer.

Thomas’ pen game proper is joined by Roger Robinson with the art — a storyboard artist, concept artist, and comic book artist with over 200 credited issues under his belt, from Marvel and DC Comics to Dark Horse Comics and IDW. Robinson has been drawing superheroes and the like for dozens of characters which include Batman, Spiderman and even Alien vs. Predator. The coloring on this book is done by Juan Fernandez, another person on the art squad who has a lengthy resume that includes Image Comics, Znescope, and Dynamite. Fernandez also has experience as a cover artist.

I can’t forget Saida Temofonte, whose work is a internet rabbit hole to get lost in: she lettered all types of comics including Batman’s Lil Gotham, Shade: The Changeling Girl, several issues of X-Men and even some manga. A letterer is often seen as an invisible job, yet Temofonte’s work speaks volumes of her twenty-plus years on the job.

While Robinson holds down illustrating, the main covers the variant and alternative covers are handled expertly by a number of artists which include Artist and Cool Dude Khary Randolf, and Phil Jimenez, a regular for the likes of the big two, Marvel and DC Comics. I don’t think I’m jumping the gun here when I say the creative team has it handled with their combined years of experience in this industry.

Perhaps one of my favorite things about Noble is that it isn’t just the story of a man trying to get back home after some big ordeal that has very possibly changed him forever. Home isn’t just a physical place for him, a place where your family is waiting for you. Home is also a safe place, a state of mind. No, Noble is more than that. Noble is also the story of a family trying to piece itself back to together.

It is about a wife determined to bring home her husband. It is about a Black man, a Black woman, and a Black family enduring the trauma that has befallen them as a family unit and separated them and trying to get back home again. If you think about it, it is a story Black people have been living and telling our entire lives, back to the early days of the first wave of our ancestors stolen from their homes and brought to the shores of what we would all call America one day.

If you wanted to take it further, I’m sure many Black folks could draw parallels to giving your all to the mission, the code, the institution, the job, the work, and being left less than whole. Of having to adapt to new living conditions. Of a broken family. Of trying to get right once again when you aren’t sure you still have a chance.

I’ve been reading comics all my life and I’ve reached a point where I know it’s okay to critique the mediums we invest in emotionally and financially. Comics are a medium that we all love and should be comfortable enough to critique them and want the best for. It is a valid concern to want to have creative team on comics that aren’t just white men. Perhaps the most inspiring example of this would be director Ava Duvernay warning department heads not to give her hiring lists that happened to be all white men.

The first rollout of writers on board has Amy Chu, David F. Walker, Dr. Sheena Howard, Alex De Campi, Joe Casey and Christopher Priest. Duvernay has been quoted in saying: “We’re in a space now where there’s awareness [of the need for inclusion], now the next level is execution.”

Even Superb, the third title in the CP universe which will make its debut with its first issue come July 19th, will feature a new title to be written by David F. Walker and Sheena C Howard, with art by Ray-Anthony Height, Le Beau Underwood, and Veronica Gandini.

I am interested in supporting a company is about the “diversity on the page” and “diversity beyond” the page. No only do I see womenfolk and people of color present in the creative teams of Lion Forge, I see the same reflected in their staff of operations from their Vice President – Executive Editor to their Senior Editor all the way down to their Social Media and Community manager. I’ve read that Lion Forge Comics strives to create comics for everyone; ” comics that everyone – regardless of background or ethnicity – can identify with.”  I believe that with Noble, we are off to a great start 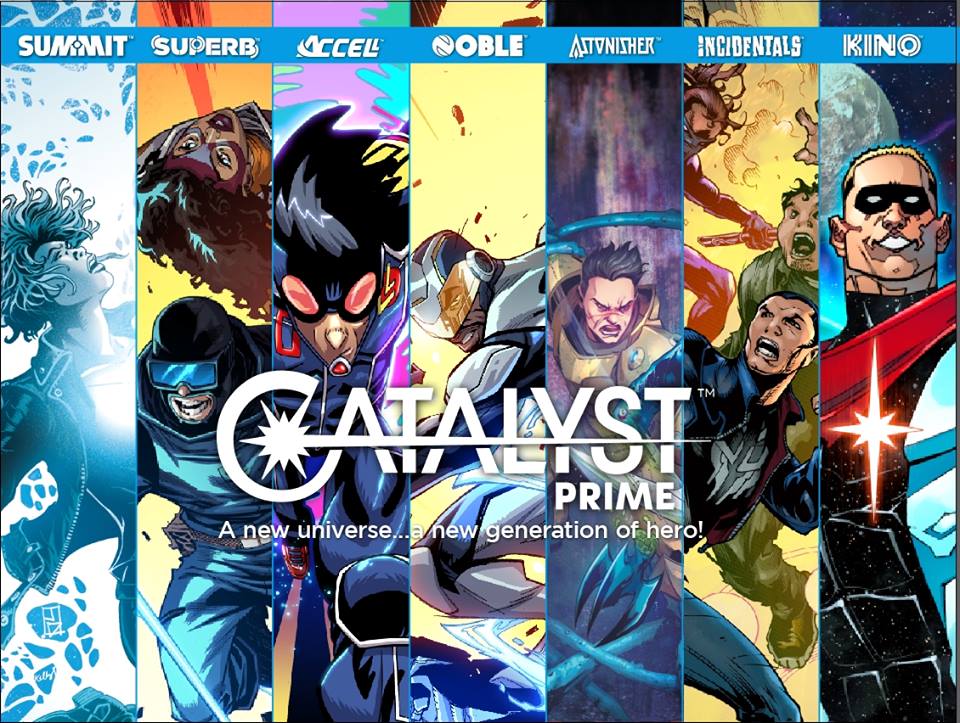 Hopefully this serves as a bit of primer for those who are interested in trying something new and for those who are on the fence on trying this series out. Three issues in I wouldn’t say Noble is a perfect series: the rise to action is still building, we’re still being introduced to new characters and the world building of the organization that would make David into their own weapon is still underfoot.

Most importantly, we’re still figuring out who David is, ironically in a tragic sense, as he is as well. Will he be a man who despite being hunted stick to helping those who need it and not become what he despises? Will he be a a man, a hero with noble intentions that match his actions? Only time with tell, catch up and jump into this series as the third issue was just released this week. Be apart of this new movement starting with this character brought to us by Lion Forge’s Catalyst Prime heroes.
. 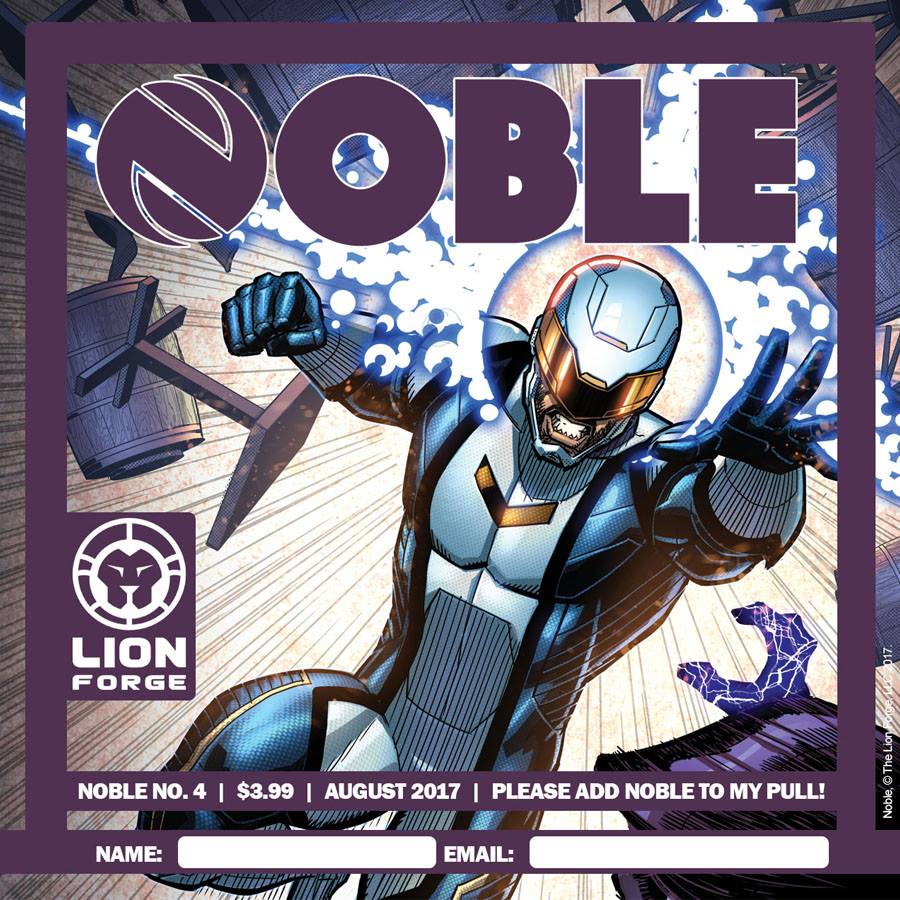 Lastly, here’s a very informative thread from Twitter regarding representation and diversity in comics that goes into a bit more further detail about the Catalyst Prime heroes, their books and some other great characters.