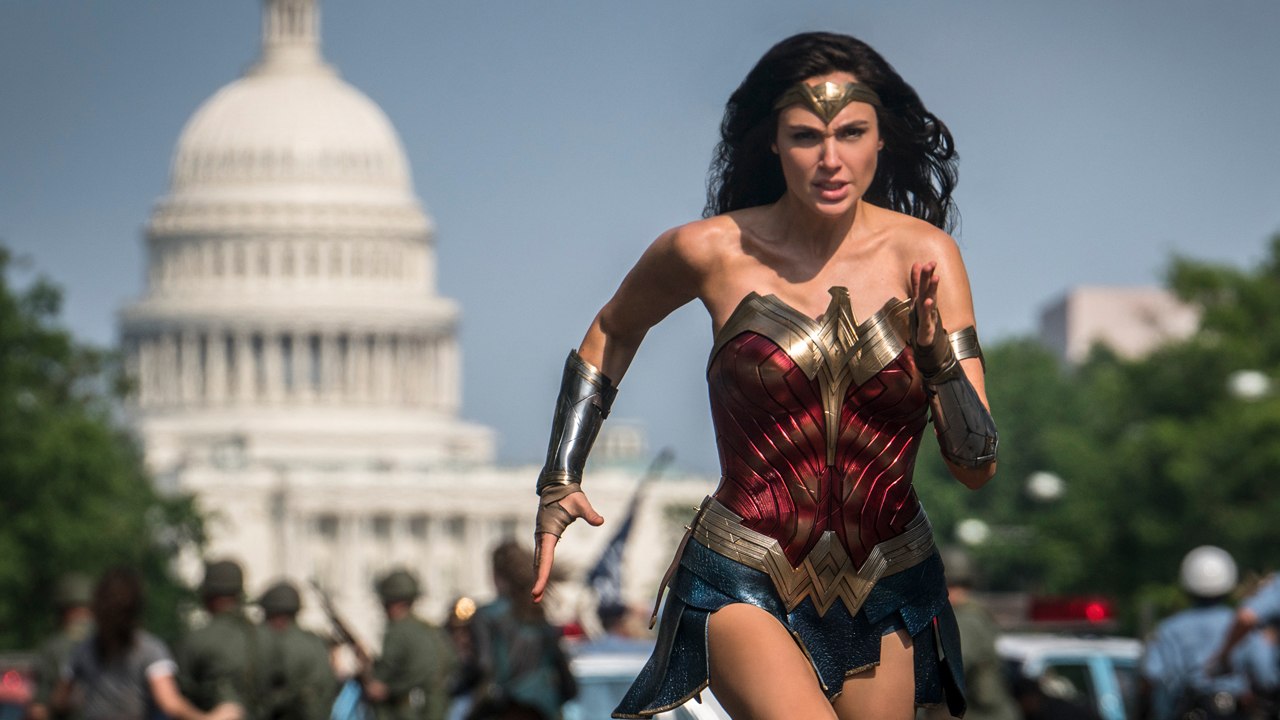 Three years after Wonder Woman‘s 2017 premiere, the world looks quite a bit different–including the cinema world, as COVID-19 slowed the industry to a pause and major blockbusters were limited to those that were filmed in the Before Times. One of those movies that completed its production was Wonder Woman 1984, and while Warner Bros. is likely happy to have such an ace up its sleeve, the film’s rollout is, in many ways, a testing ground. Similar to other big-budget films like Mulan and Tenet, impressions of the Patty Jenkins-directed Wonder Woman 1984 come minus the typical fanfare of a theatrical release. Rather than watching on a larger-than-life-sized screen surrounded by other audience members, I watched the press screening on an approved app on my iPhone with no one but my dog.

Such a context undoubtedly molds the experience of this type of movie in particular, where part of the thrill–sometimes much of it–are courtesy of bombastic action sequences and the camaraderie of fandom. Without them, Wonder Woman 1984 (and, to be fair, many films like it) are victims of circumstance. Standing on its own without the flare, it reminds me of the GLEE episode about “hairography” where the kids learned a smaller performance was covered by big, dramatic whips of hair. Details aside (we’ll get into those in a moment), the story in Wonder Woman 1984 is a pure, but bland one.

Decades after Diana Prince (Gal Gadot) and Steve Trevor’s (Chris Pine) adventure in the first Wonder Woman, Diana lives in the 80s with what is a seemingly perfect life to an outside observer: She’s successful, beautiful, and well-liked. That outside observer is personified in a social outcast named Barbara (Kristin Wiig), who makes a literal wish to be like Diana.

What follows is some of the more obvious fare–Barbara’s wish comes true courtesy of a magical, ancient artifact that grants wishes, and the source of absolute power corrupts absolutely. Barbara gets Diana’s strength as an unexpected bonus to her charm. But while Barbara was unaware of the artifact’s power, the shrewd businessman Maxwell Lord (Pedro Pascal) is well aware and seeks it out.

The film’s theme is made plain from its opening sequence in Themyscira, as a young Diana learns that “no true hero is born from lies.” In the present (the 1984 present), adult Diana gets the one thing she wanted as Steve Trevor is wished back to life, but, of course, such a wish would come with sacrifices that Diana would have to weigh as a hero.

One of my personal hopes for Wonder Woman 1984 is that it would respond to the criticisms of its origin; that is, that Wonder Woman was less the hero in the first woman-led superhero film than her love interest, Steve, who had led a doe-eyed Diana through the world before sacrificing himself to save lives. Wonder Woman 1984 does just that by offering a direct role reversal for Diana and Steve. This time, Steve is the wide-eyed fish out of water and Diana is his savvy tour guide through the modern world.

In speaking with Patty Jenkins, I learned of a bit of her mindset in hoping to make a film that feels more as a standalone than a sequel. (You may notice the different fonts, costumes, and colors, which are intentional.) Pulling that off comes with a bit of compromise that has winners and losers: some of the origin-story foundation is welcome for entry-level viewers to learn Diana’s beginnings, but the movie’s 2.5-hour runtime may feel overly long for viewers who don’t need exposition from Themyscira.

In tone, Wonder Woman 1984 begins with a bit of heavy-handed excess towards its setting–an opening mall scene will include slapstick-y comedy and more than enough 80s nods for you to get the point–and might feel corny in a way that’s great for young kids.

Actually, Wonder Woman 1984 is an unexpected fit as a family movie. In a crowded landscape of more “serious” superhero stories, it carves its own path as a kid-friendly big-budget action film. No cursing, sex, or action sequences lending themselves to dead bodies–not even Wonder Woman’s hallmark sword and shield, in an intentional decision to show Diana as a peacemaker whose focus is less on violence than finding humanity in those who need it. The result is a slathering of cheese, including the conflict’s resolution that’s something akin to Michael Scott from The Office hoping to solve his financial problems by declaring bankruptcy. Where stakes are end-of-the-world level high, the solution may land as comical unless your suspension of disbelief is set to a standard deviation or two lower than you might expect.

Its earnestness is its greatest strength or biggest weakness, depending on what you’re looking for in a superhero film. But if you were a fan of their first collaboration, you’ll love how Patty Jenkins and Gal Gadot expand Diana’s heroism to new places in a new decade. Action broadens to other regions of the world, with a bit of historical fiction laced in to add an intellectual sentiment fitting of Diana’s history and Barbara’s academic brilliance. If you want a sincere holiday movie that appeals to your inner optimist, Wonder Woman 1984 is an easy win. If you suspect, though, that its heavy servings of wholesomeness will make you roll your eyes, this reviewer can confirm: it probably will.