Truly this issue displays such a thorough understanding of the spirit of the Wonder Woman Amazonian tradition and gets so many things right it’s hard to know where to begin. Perhaps it’s best to start with the Amazons themselves.

As I mentioned in previous reviews, the idea of Themyscira as a literal paradise for women has often historically become obscured by the male gaze in comics, leading to only occasional glimpses of thoughtfulness and strategy. Here, from the very first page we observe four different panels that demonstrate Amazonian mastery over technology, embalming, medicine, and weaponry (despite its foreign origin). And why shouldn’t they be? I adore this idea that a Utopian society consists less of glamorous frolicking with the odd lesson in archery thrown in and more of a thirst for knowledge and perfection of its application.

Nicola Scott’s art only emphasizes theses women’s brilliance more with steady, serious faces absorbed in work, and yet not so much that they seem panicked or inexperienced. And that’s not even touching on the system of government. Rather than a power structure led by the cult of Hippolyta, we very clearly observe a council in place whose seats are held by not one but two Black Amazonians (Philippus and Areto). Significantly each member actually contributes to the discussion and is listened to in turn, even when there are differences in opinion. It’s very clear that these are women who love and respect each other and operate from a generous instinct first instead of any selfish need to be “right.” As a reader you understand instantly the devastating difference one would feel if you had been born into this world and had to travel to our corrupted “world of man.” 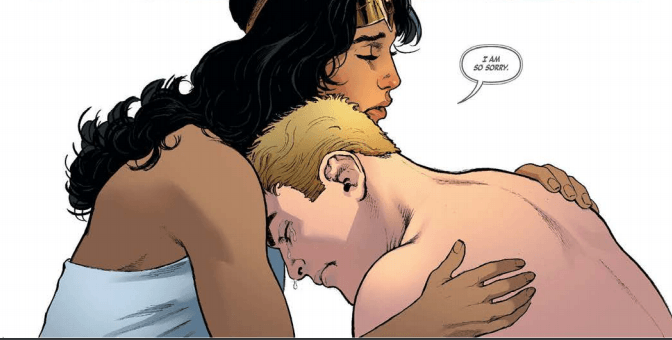 As for Steve Trevor’s iconic meeting with Diana, all I can say is “finally!” After literal decades of smug lechery trespassing the Themysciran shores, Greg Rucka has at last given us a man who acts like a decent representative of humans to the Amazons. I’ll admit, I had my cringe at the ready for the moment “Angel” was uttered but thank the patrons it never came. No need to fear for raunchy quips or inexplicable chemistry here, folks. Rucka and Scott manage to paint a beautifully tender scene between Diana and Steve that at last emphasizes what makes them both great characters that you as the reader would sincerely want to emulate, people’s whose sensitivity to others cannot be stated enough. I trust this Steve because his first thought is not Diana, but of the brothers he lost to the tragedy of their crash. I hope to see more of him appear layer by layer in the odd issues as well.

Lastly, but maybe most importantly, Diana’s transformation into the the ambassador to man’s world cements this issue as one of my favorite retellings (including arguably one of the best executions of the “Bullets and Bracelets” game). Once more Hippolyta does not wield her power heavily in calling the games, but rather consults with and is even comforted by her general in realizing it very well may be her daughter who will be their champion. But of course she would know!

How strange that for years Hippolyta has been shocked by her own beloved daughter’s strength, courage, cunning, and curiosity about the world beyond Themyscira. No, this portrayal continues to underscore that the island’s most sacred treasure is the Amazons’ ability to always act in love first and foremost, and this is the real reason Diana is able to carry herself as a true hero in her later life.