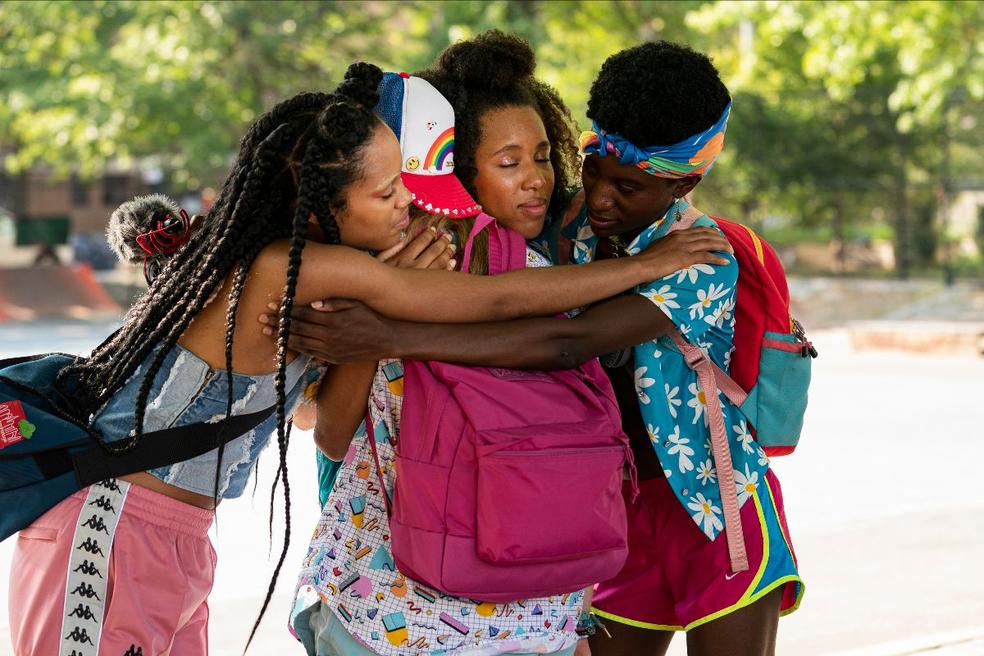 It is 2020 y’all, and we have entered the most unprecedented time of our millennia, cops are still taking time to risk the Rona in order to fulfill their unwavering call to kill black folk. Are we surprised? No – Are we fed up? Well my ancestors are speaking for me on that one because I can feel it like I’ve never felt anything before. We’re getting up, we’re saying what needs to be said, and because of this virus the rebellion is being zoomed, reposted, linked, fb discussed, streamed and everyone is at their computers with nowhere else to go.

It is uplifting – this version of our uprising and people are standing for us around the world. But it also does not quench the despair, the hopelessness, the straight-up fatigue. As my good friend Walter and Kleaver Cruz would say, choose joy (The Black Joy Project). So I find myself seeking the things that bring me solace, and if you didn’t guess it, that is television, movies, entertainment. Don’t get it twisted – not as a distraction but as fuel for my soul. It Reminds me how I fight and what my tools are. So in honor of black people and pride month with yet another uprising led by black and brown queer people, I am putting out my tv/movie playlist for all the many moods of brown folk during these times (in no particular order). Movies and shows that will channel your rage, that motivate us, those that match our current mood and those that remind us of presence and life.

First and foremost, happy pride y’all. I know it is tough we are at home and cannot celebrate in ways we are used to. In addition, black trans lives need to be protected now more than ever. When we say all black lives matter we mean every bit of black excellence needs our strength and support right now. Full stop.

Pose is one of the greatest works of art on television. This show is in this list for the motivation and inspiration of black and brown life. Not many people truly understand the foundation of movements that black trans people have provided for us all. Martha P. Johnson at Stonewall and the pride march birthed the fire in so many to be about something and fight for it. In our community we have an affliction that is adopted from our oppressors and that is an ability to erase our history at times. This is one we need to remember, Black queer and trans lives is why we fight.

Pose gives you a “fictional” look into the story of LGBTQ lives in the 80s. Like Paris is Burning, Pose has electric energy, and displays struggle and joy with verve, with music, with sadness and pain. The show has a style you quickly fall into and fall in love with. You can’t deny the humanity of each and every character, the ones who have fight to the ones who put up fronts – your heart grows full with every scene. This is not the first time Pose has made it to a list of mine and I will continue to push it forward. I have said it time and time again, this is a show about family, about life. Season two is coming to Netflix, June 11th binge it with me, imma have my tissues and rose ready.

This may be an obvious one on the list but I would be doing a disservice if I did not include this as part of the playlist. A badass black woman beating up white supremacists because well – they know something! This makes the list for the rage in us all. Watchmen not only provides us with the G.O.A.T Regina King as Sister Night but gives all black people the ability of visibility in the Tulsa massacre.

I remember listening to creator Damon Lindelof on the HBO Watchmen official podcast where he spoke about telling all of his white friends about the massacre and them never having heard of it, their minds being blown. While every black person going, “yup, I know.”

No judgment if you don’t know, but the Tulsa massacre was a moment in history where white supremacist racists could not handle the fact that the town of Tulsa, Oklahoma was a fully black-run, thriving community. Holding our own businesses, banks, homes without the need or use of white people and they bombed destroyed and killed 100s of people and children. Watchmen takes the time, puts in the work to show us – what if they got those reparations and the system was flipped to uphold the rights and livelihood of the black and brown people the country insisted on continuing to traumatize and beat down. As genius work that blends history with the powerful world of fantasy and comics, it builds on the rage in intellectual and fulfilling ways. Watch this to work with the rage and imagine the future. 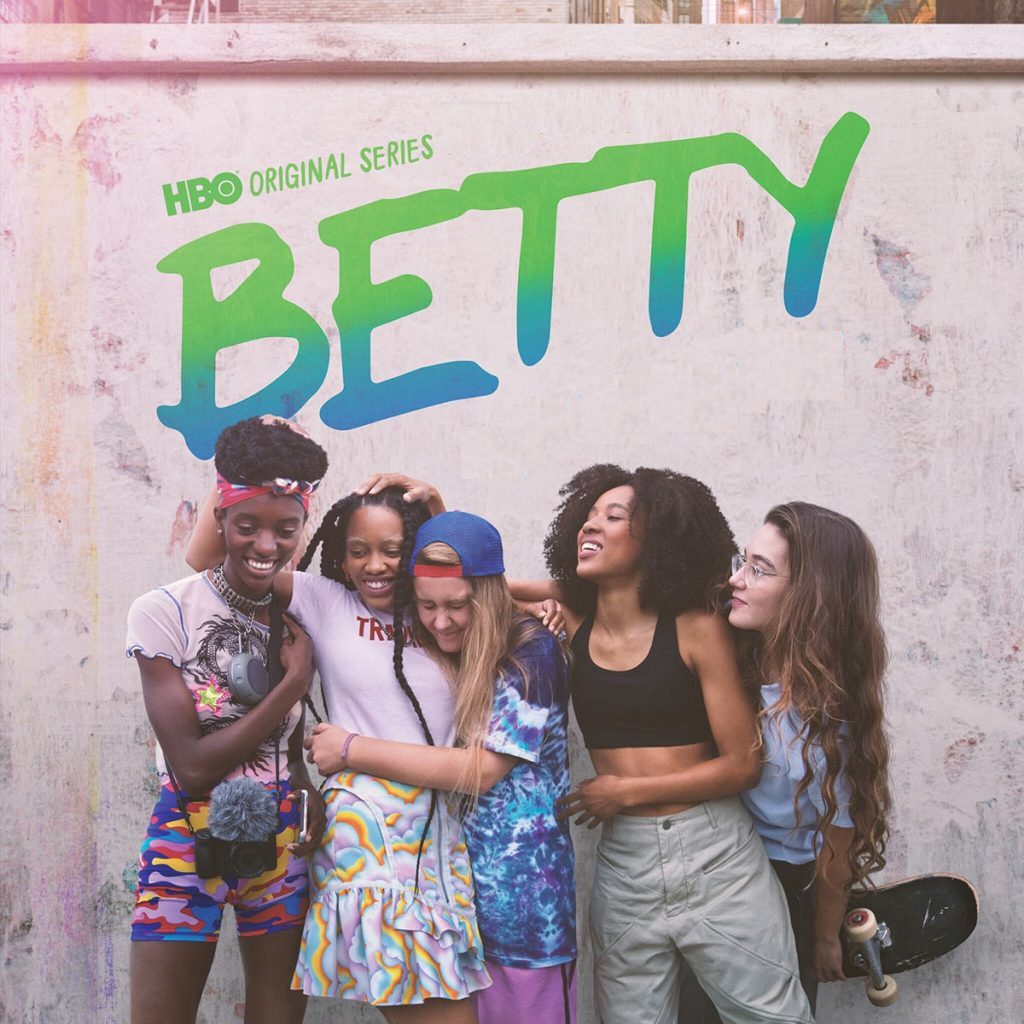 Betty is a new series on HBO based on the world of the skater girl in however way girl is defined for the skater. It is a documentary-style but fictional piece set in LES New York City following a gaggle of girls with style, grit, and tenacity. This show is in rotation on the playlist for its view of black, brown, queer youth, life, presence and joy. The documentary-style plays on the realness of each character working with not traditionally trained actors you feel the spirit of the piece hard body.

The term “Betty” refers to the word given to woman skaters with the show reclaiming it for empowerment. The show brings you on these girl’s journey through the summer as a skater in a male-dominated world. The show is created and directed by a white woman, that cannot go without saying. But I am here to shout out and push up the young women the show lets skate free on the screen. The history of the making is each young woman involved is a true skater, meeting the creator (Crystal Moselle) on the train and working in pure collaboration for the story to be authentic to their voices and style. The women, Dede Lovelace (Janay), Kabrina Adams (Honeybear) Nina Moran (Kirt), Ajani Russell (Indigo) Rachelle Vinberg (Camille) reprise their roles from previous film, Skate Kitchen, and steal your heart the hard way. To see these young women, be their at times f-up selves, with majority brown women being SO L.E.S. and skating against the grain, is pure joy. You can let go of the rough around the edges performances and lose yourself in their laughter and imagery.

This film is one I feel many may have slept on and is included in the playlist for the fear and the rage. A film starring Daveed Diggs (Hamilton OG cast) as Collin and Rafale Casal (Def Poetry Jam) as best friend Miles. We are taken through Collin’s last few days of parole until he is “free.” A story of the internalized fear when pushed up against the true face of the system, and the rage that you feel need not be curbed or controlled.

It poetically tackles (metaphorically and physically) the knotted and tangled existence of being a black man. You feel the pulse of this piece in your throat and in your hands. With Daveed’s theater background, the imagery is in your face. It may feel too blatant at times, but as a black person you realize as it comes at you – why be subtle? With rhyme and rhythm, stillness and care, were are tunneled through this man’s mind in three days. Your anxiety goes on high is short bursts it feels like you are running a marathon but in a full-on sprint. Like I said, heavy metaphor meant to hit you in the chest. Watch this for retrospection and letting yourself feel the rage and fear for what it is, when you feel the heat in your hands and your heart.

C’mon, how could I not. This is on the playlist for all the reasons, the performances, the spirit, the love, the lighting, the storytelling. This is for the life, presence, and the motivation. A queer “coming of age” story is how one would classically describe it, but it is so much more than that. A story that has a life of its own. Although it is telling a personal story, you know it is providing an in for anyone who has experience being black and queer as a youth – through adulthood. This is Brown life displayed in a way we have not seen in mainstream media. A way that appreciates the stillness, the sadness, the relationship to all surroundings and existence in our bodies.

The story follows a young boy through manhood in his constant exploration and discovery of himself, and the stages of a life displayed in nuance and depth. It has elements of calm that transport you to understanding, to empathy and black boy joy. Everyone knows the scene in the water with Mahershala Ali teaching our young lead to swim. This action which seems so small can be so big. A world where racism can’t believe black people can swim, that we can’t rise, we can’t have strong black role models, this moment felt free. This film allows you to be present and remember you live you breathe and gives space for us to keep moving upward and onward.

Finally, our last track is a comedy, one of the most important parts of the movement for me, because if we can no longer laugh, and no longer find the joy – then what are we fighting for. Undercover Brother stars Eddie Griffin as… well… Undercover Brother, a freelance agent using his espionage abilities to take down “The Man.” No, literally, ‘the man’ is an evil overlord who seeks to keep black people oppressed and destroy their image for his gain. This is on the list for laughter and joy and levity. The film came out in 2002 as an over-exaggerated version of historical blacksploitation in silly slapstick fashion.

The film uses stereotypes spun on their head to show black power working with brains, skill and style to take down the white man at the spy organization “The Brotherhood.” This film brings together every aspect of the genre it pokes fun at with characters like, Smart brother, played by Gary Anthony Williams who does the experiments and creates the gadgets. Conspiracy brother played by Dave Chappelle is the eyes and ears of the team, and Sistah Girl played by, Aunjanue Ellis the strong Pam Greeresque field agent ready to get the job done. Even complete with the diversity hire, Neil Patrick Harris who plays intern Lance. This will give pride in the strongest way but also the illest side-eye at the same time. This film will have you play into the self-care of laughter but not forget what the fight really is.

There it is a playlist that can take you through many phases, meeting you where you are at and hopefully taking you to the places you need to be for the time we are in. Find your perfect playlist to help your mind and your soul.

Stay safe y’all, stay vigilant cuz we know Black Lives Matter it’s the rest of the world that needs to catch up.