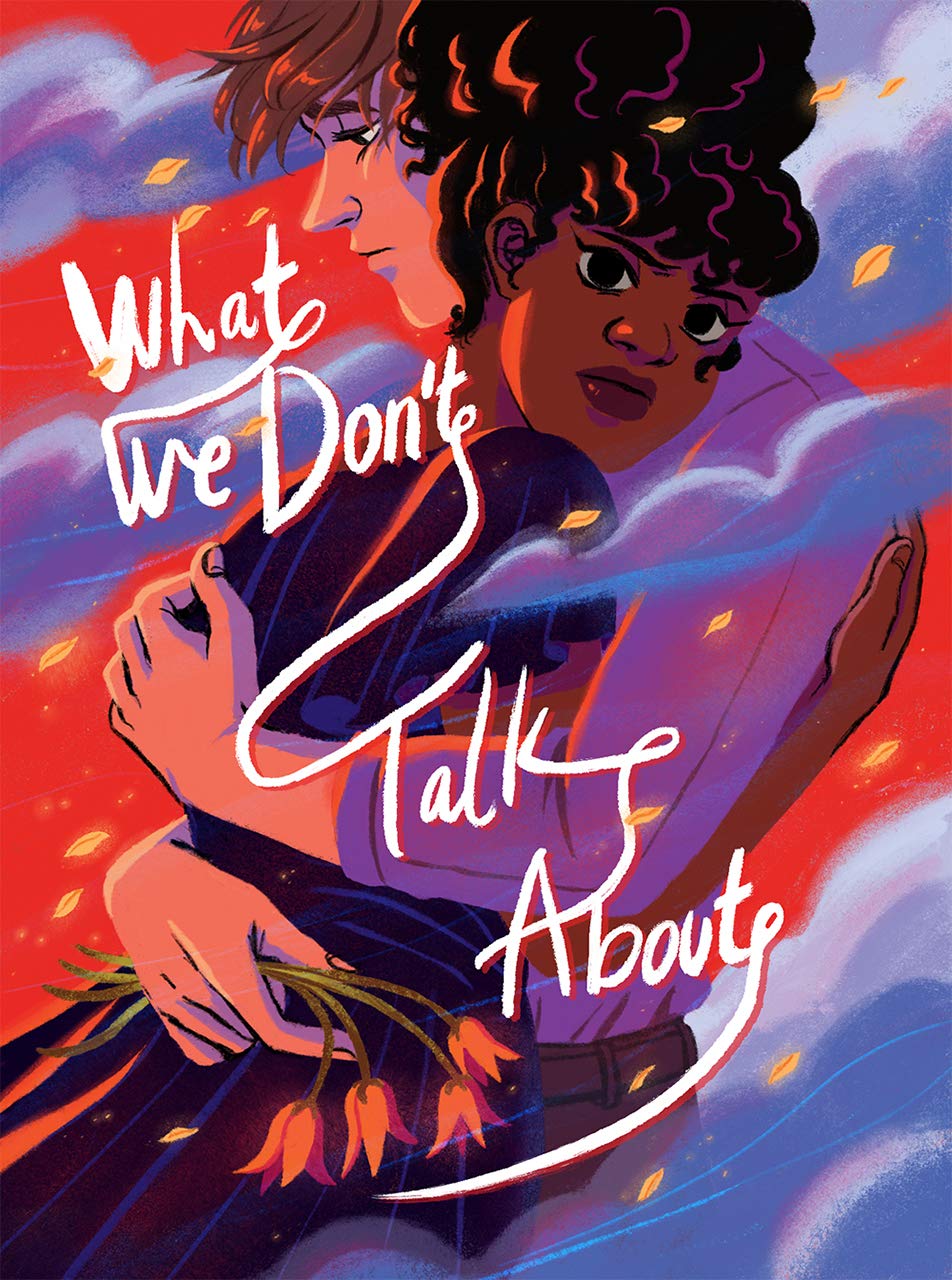 I was HYPED to get a review copy of this graphic novel. While not intimately familiar with the author, I had seen her art online in a few places. Like the Dr. Harold Moody (once described as Britain’s Dr. Martin Luther King) Google Doodle and a few of these gorgeous pieces of dancing, smiling, carefree brown-skinned women for AARP. While I didn’t know Charlot Kristensen, the creative behind the work, I saw enough of her art to know that it contained a warmth, not every digital artist is capable of bringing true warmth to their work and she used all the colors to capture attention in every piece of hers that I saw. So, when I had a chance to review her debut graphic novel, I was so happy and agreed.

What We Don’t Talk About is a heavy hitter of a debut for a graphic novel. The book follows Farai who, has been in a relationship for two years and has never met her partner’s parents. Until this weekend. She’s not prepared for the crap show that awaits her. Neither does her significant other even try to prepare her for the folks who raised him.

The first pages introduce us to one Farai, daughter of Zimbabwean immigrants, and girlfriend to Adam whom she’s hurrying to meet. Her bedroom invokes visuals of a person who loves color, loves plants and who is an artist. And she carries on a conversation with her mother on the phone and she assures her that “He’s different:” we’re treated to art supplies all over the room tucked into corners, brightly colored curtains and rugs and potted greenery making real estate everywhere. Already, I get the impression that Farai brings light and color and life wherever she goes. Whether that is appreciated elsewhere is to be seen.

Taking a train with her lover out the city to her parent’s impressive home means a weekend with his parents that doesn’t turn out great. Their home becomes an oppressive place where Farai finds herself the target of racist jokes, sly generalizations on people who are different, and the feeling of simply being unwelcomed. Tragically, it is also a place where she finds her boyfriend Adam quiet, subdued, and not willing to find his voice to support her.

Her partner isn’t willing to rock the boat, and stand up to his parents when he knows, himself, that Farai is uncomfortable. Or that his parents, especially his mother is dismissive. Even wearing a simple, colorful headwrap, something she often wears–out for a short trip on the lake with the parents is frowned upon as he tries to get her to change out of it–for the sake of not being too “loud” or too different.

At 100 pages, I was impressed with the depth of the narrative and how fine the graphic novel’s pace moved along the story. Kristensen’s art is gorgeous, and she vividly paints with color to express different moods and create a world that looks like ours. In her artwork, she is an effective storyteller using emotions that appear on the faces of her characters and their body language to add layers to any scene.

The bowed head of Adam entering the house and continued behavior of trying to retreat into himself at dinner when a conversation gets heated. The severe looks his mother, Martha, gives Farai at times. The cool expressions she wears when saying backhanded compliments. The physical distance she places between her and Farai–it’s incredible to read and follow along with.

Even on pages with no persons visible–thoughts from Farai are accompanied with panels and artwork that fit the scene, perfectly. After Adam and Farai have an argument in the house, she retreats outdoors to a shady tree area to draw and try to distress. After a talk with Adam with him apologizing, they make up, but she still looks troubled. A page of artfully placed panels reveals her inner thoughts of wanting her boyfriend to be present and be there for her. Leaves pulled by the wind from the branches of trees float on, in a flurry surrounding these panels in some chaotic dance. Perhaps mirroring some of the feelings our protagonist was feeling–all the emotions inside her flying around. Definitely, not calm.

While I loved the pacing, the depth of the narrative, and how the ending gave some closure to the situation, I really wanted more of Adam and Farai interacting. As a reader, we are treated to so many pages of Farai finding herself in situations with Adam’s parents–especially his mother. There’s not enough of these two and that may even speak to how abandoned Farai feels in this strange place with these strange people that she’s trying her best to get along with. Some of the dialogue was a bit clunky at times, but it all smoothed out for the big scenes, especially the climax of the book’s conflict that leads to the ending.

What We Don’t Talk About works on so many different levels. Perhaps we all haven’t been in Farai’s shoes–but for persons of color, we’ve all experienced the micro and macro aggressions that comes with having skin that isn’t fair and being in places where you’re seen as less than, or a threat. Reading along reminds me of all the acquaintances that never grew into deeper friendships because of distasteful jokes about Black hair at the office or the dismissing of how certain folks were treated right in front of us by campus police or other authority figures. I retreat back into a memory of considering giving my heart to someone, specifically someone non-Black, and having a great epiphany that meeting the family wouldn’t go well by certain red flags I’d already witnessed.

I happen to come across a review for this book that of course, enraged me: it spoke of the reviewers’ dislike of Farai. Most of the reader’s reading of the book interpreted the protagonist as her being disrespectful in her confrontation of Adam’s parents and how she should have been calmer and collected in trying to reach a middle ground with them. The review also detailed that young people of today all seem to believe that only their opinion matters. No one else’s. And that made me pause because it was a tune I’ve heard before. Several times, in fact. It reminded me that… folks of color just can’t win. Living in so-called post-racial society has made some think that discrimination on the grounds of race doesn’t happen or happen as often anymore.

How many times was I told that I should have educated someone in a way that was kinder? How many times have I been told that my delivery should have been softer? How many times has my Black body been at the mercy of someone who was quick to dehumanize me with mere words? How many ways have I been expected to bend and break myself into positions and into boxes for someone else’s benefit, learning, ease of comfort–how many times do women of color, especially Black women have to do this on a daily basis? Why do we code switch, wear a more conservative hairstyle for the job interview, tone down a love of color, or a certain style of clothing or a certain genre of music to be more…neutral? Likable? Less threatening? Loveable?

What We Don’t Talk About is a graphic novel that carries great weight– tackling issues of being in an interracial relationship and of what it means to be non-White outside the United States. Set in the UK, this is a compelling read that is both timely and relevant. Even at 100 pages, there is enough social commentary and narrative meat on being different, on being brave enough to talk about the things folks don’t want to talk about, and how your skin will present you as unworthy to some.

Easily read in one sitting, I love that this book reinforces that race does play a part in how the world perceives us, how even a simple meeting the parents can be disastrous and hurtful, and knowing your self-worth–even if the one who is supposed to be yours–won’t. Charlot Kristensen’s debut is a memorable one and I look forward to the storytelling she will bring to us with her future work. With her talent and her flair for artfully expressing the feelings and words that don’t always get spoken or verbally expressed, I can already predict her next project will be equally moving and insightful.

8.7 Muted Conversations at The Dinner Table Out Of 10

Charlot Kristensen is an Afro-Dane Illustrator based in Dublin. She graduated with an Illustration degree from MDX University, London, in 2015 and is a member of the Drawn Chorus collective. Her work was featured in the anthology We Shall Fight Until We Win (404 Ink / BHP Comics, 2019) Having a black mum and coming from a mixed family, Charlot believes that representation is important to our development. Her art often represents women of colour in hope of empowering them and changing their narrative. The main focus of her work is comics, editorial and book illustration.  See her online at  charlotkristensen.com  and on Twitter and Instagram.