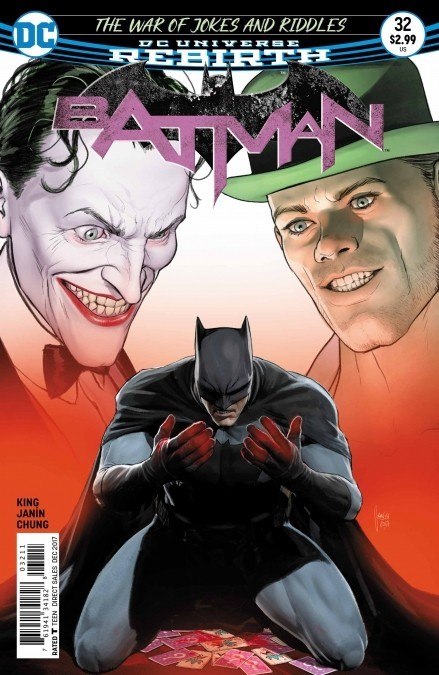 For months we’ve seen The Riddler and Joker lead equally fatal campaigns that left dozens – maybe even hundreds – of fatalities across Gotham City. With Batman, and sometimes Bruce Wayne, stuck in the middle with seemingly no cards left to play. Issue #32 of Batman sees this enjoyable story arc come to a fitting end.

The entire reason Bruce Wayne has even been reminiscing on this story is because he’s baring his soul to Selina Kyle so that he can get her honest answer to his proposal a few issues ago. That very important detail can be a little easy to forget given the drama and suspense of The War of Jokes and Riddles. But that’s the most important part of the story the, which is why it starts and ends the issue. For now, let’s highlight the conclusion of a story arc no one could’ve imagined outside of Tom King tha gawd.

This is it. Batman’s finally standing in a room with the Joker and Riddler. There aren’t any henchmen to intervene or any [living] civilians to get in the way. The brawl is one for the ages. Everyone gets in their fair share of 5-piece combos but also catches a couple fades. As expected, Batman comes out on top. Now the story gets interesting.

“Not every story is your story!” – Edward “The Riddler” Nigma 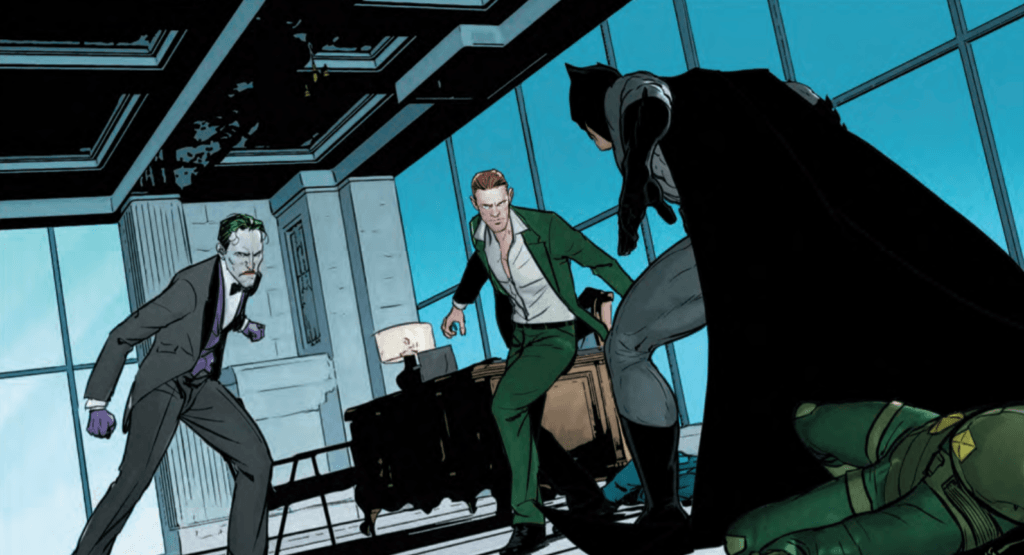 Those words from the Riddler to the Joker perfectly sum up a lot of what we’ve seen in this series lately, especially in this most recent arc. For a while now, Batman’s been used more effectively than imagined as a springboard for these otherwise secondary characters. Part of what makes his stories so good is that many of his villains, partners and sidekicks could go off and be successful leads on their own. [Think Michael Jordan’s Chicago Bulls, especially Scottie and even Dennis, specifically.]

If anyone saw their clout grow as a result of the events in the past few issues it was The Riddler. As it turns out, everything that’s transpired this entire arc was his doing. We originally thought he saw Batman as his ultimate conquest, that was a ruse. In fact, his goal was really to figure out why the Joker lost his laugh to prove to everyone there isn’t a riddle he can’t solve. Wow.

I won’t ruin how that part of the story ends anymore because it’s absolutely worth reading, but the final pages are getting spoiled. Deal with it. This is your warning. After baring his soul to Selina and telling her she’s not obligated to love him back, the woman he’s had an on-again, off-again relationship with what feels like an eternity finally gave her answer. With fresh tears in her eyes and a smile, she said yes.

Are we about to see a Wayne-Kyle wedding in the future? Hope so. Knowing how comics work, they’ll both probably come close to death before we see anyone walk down the aisle and there’s sure to be plenty of drama outside of that. If any of King’s previous 32 issues are a good example of what’s to come, let’s just sit down and enjoy the ride until we get there.