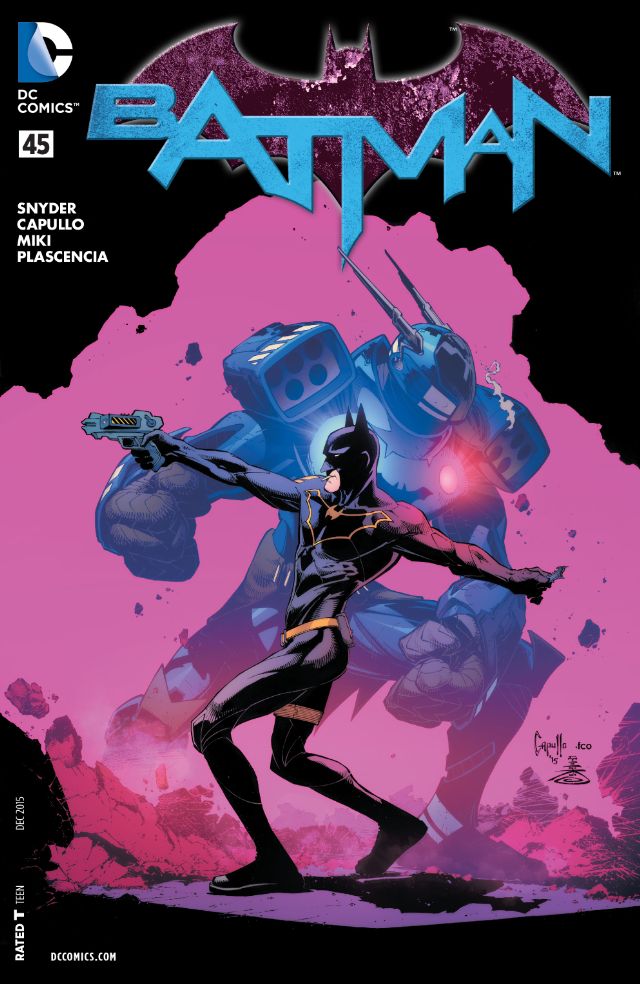 So, one thing I’m noticing about “legacy” titles, books where another character takes over an existing hero’s mantle, is the change in how the original hero is treated. I would leave Ms. Marvel out of this hypothesis (Kamala Khan stands on her own, but Carol Danvers’ appearance was huge bonus for the series), but it seems like lately, when a hero is replaced, that hero isn’t just thrown to the side in favor of establishing the new one. Jason Aaron’s Thor, for instance, went out of its way to make the journey as much about the Odinson finding his worthiness as it is about Jane Foster. Same goes for Captain America, keeping Steve Rogers on in an operational capacity. I’m finding this to be no less the case for Scott Snyder’s Batgordon run on Batman so far.

Issue #45 continues the Superheavy saga and Jim Gordon’s ongoing war against the murderous, enigmatic Mr. Bloom. Batman finds himself in a tricky situation that tests his limitations as a superhero and what his cop instincts lend to his new “promotion.” Half of what’s always made Batman cool over the years is that he does what he does with style and theatrical flare. Gordon has always been an old school flatfoot who, to quote his line in The Dark Knight, “does the best he can with what he has.” Snyder keeps the action fun while also offering some commentary on whether or not the concept of Batman works as a police entity.

Meanwhile, there’s plenty of exposition devoted to Bruce Wayne trying to make a new life for himself with Julie Madison. It’s not as strongly executed as it could have been, but the storyline is still mighty effective at depicting a man taking a life he doesn’t recognize, taking the remnants and repurposing them into something that can heal the city.

It ultimately brings into question whether or not our memories truly make a difference in who we are at our core, reminiscent of a theory Damon Lindelof once had about Batman. Of course, Greg Capullo is the glue that makes all these components work so beautifully. His Gotham is still the gritty wasteland it’s always been, but his color palette is perfect for this time in the city’s evolution, healing from the Joker’s “Endgame.”

Bottom Line: This is probably the most effective installment of the Superheavy saga yet. Snyder and Capullo have done a great job of balancing the journey of the Old and New Batman, making for a richer mythology.