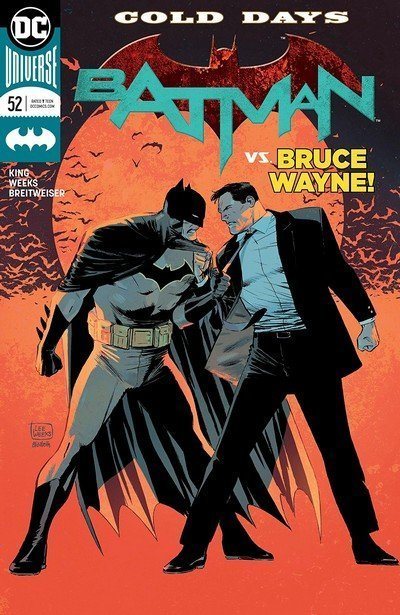 Who would’ve thought that the best way to get a Law and Order fix would come in an issue of Batman?

Batman #52 follows up on the trial of Mr. Freeze, who’s been charged with the murder of three women after being captured by Batman. Ironically, Bruce Wayne is on the jury. While Freeze may be the defendant, Batman’s character and motives are also being questioned by none other than Bruce.

As the cover implies, this issue is all about a conflict between Bruce Wayne’s dueling personalities. Typically, Batman investigates a crime, finds out who did it, catches them, and goes about his day. But being placed on a jury for one of these cases forces Bruce to question every single one of his actions. A feeling only amplified by his anger and self-doubt after being left at the altar by Selina Kyle.

Most of the jurors – 11 out of 12 to be exact – think the case is open and shut. Freeze has a lengthy criminal history, the crimes follow his modus operandi, and the evidence presents a clear connection. You can’t blame the jury for being so lopsided. Which makes it all the more interesting to see Bruce question his own actions and how they may have altered what happened that night.

I wouldn’t blame you if you chose to avoid a comic book where the main plot line is a jury deliberation. Fortunately, Batman #52 plays on this and uses flashbacks of the night in question. When interwoven with Bruce’s recollection of the events, Weeks gives us a ton of really cool things to look at.

In the last issue, we saw what happens when Bruce lets his anger get the best of him. This issue shows us what happens when Batman does the same. And it’s far more severe—but not quite as impressive—as ripping a urinal off of a wall and hurling it across a room.

It’ll be interesting to see Bruce navigate his feelings without straight up saying the words, “I’m Batman” and make sure that the justice system doesn’t put an innocent man in prison on circumstantial evidence.