I’ve ventured into the deep and come back stronger. What is dead may never die. I saw Batman v Superman: Dawn of Justice in the theater and fell asleep a few times. Not too long, but juuuuust long enough that I knew the movie was a trash compactor of Zack Snyder’s vision, none of Batman’s ideologies and two and a half hours of Super grimaces. I did not pay to see Fant4stic Four, thank Bast, cuz that viewing would’ve quickly turned into a Night at the Theater fantastic sleepover. Both movies are horrible takes on six of the most iconic comic book characters of all time, but only one can be crowned king of the basura hill.

Batman v Superman is really bad…like witnessing DC take a steaming pile of shit on sacred scrolls bad. It was long, dreary, and unappealing, but featured a few dope fight scenes and, more importantly, a fire ass introduction to Wonder Woman. With that in mind, I have to say that Bats v Supes is the better movie. Now, 2015’s Fant4stic Four my G?! 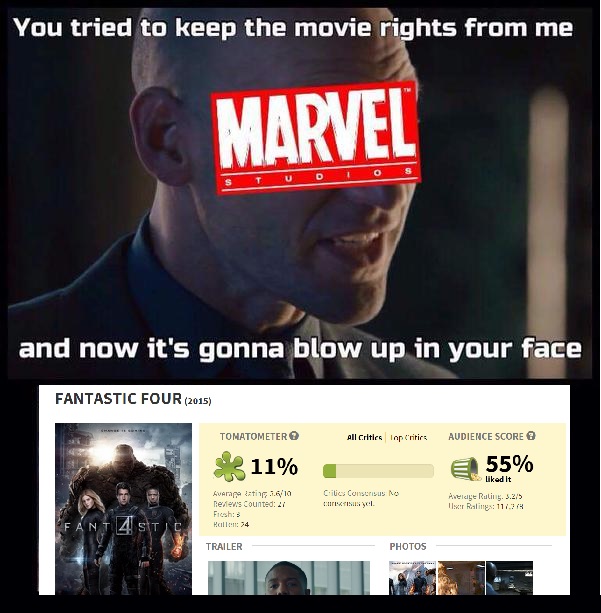 Setting the record straight 101: The only reason Fant4stic Four was even made was so the movie rights didn’t revert back to a studio that would have done it..dare I say it, JUSTICE!! They don’t give our heroes the courtesy of name dropping! No Mr. Fantastic, no Invisible woman, no Thing, no Human Torch?! They dont even call them the Fantastic Four!! How sway??

Ben Grim’s backstory was weak as hell. Just a sad sidekick to Reed’s genius. And don’t even get me started on the two actual good actors in this movie! Kate Mara’s Sue Reed is relegated to glorified costume designer and Michael B. Jordan’s Johnny Storm comes from that street car racer life so he has that whole troubled past, difficult guy thing going for him, so the only way to quench his thirst for speed and danger is..Instagram? Ya’ll not finna act like Johnny didn’t get transported to another dimension/world, look around and deadass say “this one is DEFF IG worthy!” then snap a dam flick!! Gtfoh.

They make sure to hit on all the tired and ridiculous movie tropes. Let’s allow this group of inexperienced kids the power to open portals to another world! Oh NASA forbid anyone but them to go through the portal?? Fuck it! We’re on a New world! What’s that green stuff?! Lets touch it! Explosion! Hellfire and brimstone! The planet is unstable! They were literally battling C3PO Dr. Doom as otherworldy Pompeii volcanic destruction happens all around them. That was the movie.

Lest we forget the performance of a lifetime, Toby Kebbell and his portrayal of Doom. Such a disgustingly disappointing attempt at the iconic villain. Homeboy’s face was out here lookin like balled up aluminum foil with avocado smeared all over that shit. Avocado Foil Face only had all the telekinetic power in the world but couldn’t beat a bunch of kids who were scared to use their powers a whole month ago. Maaaannn Fuck. Outta. Here! 2015 Fant4stic Four. Garbage season.