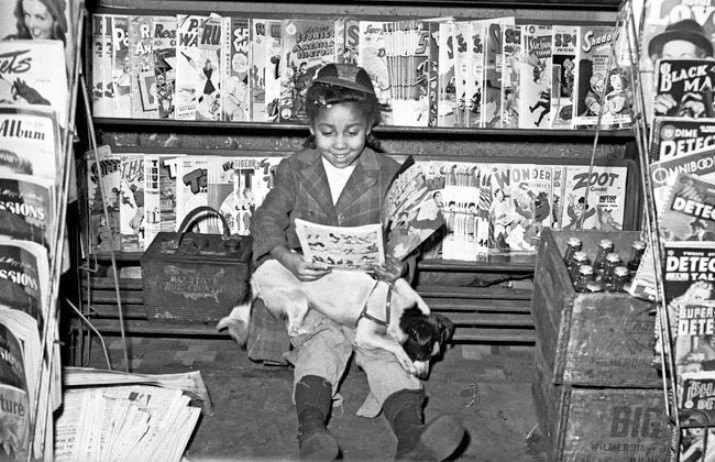 The recommendation request I get most often, hands down, is “What comic book would you recommend for my child who’s just getting into comics?” This can be a question of details: how old is your precious little monster? Do you want something with specific representation? Super heroes or no? The flowchart to finding the perfect comic is long and complex — Choosing the perfect comic for the kid is a classic Black Nerd Problem. That said, there are some comics that just stand out as ideal for Black girls. There’s a good variety of them out there, available in print from your local comics shop (find your local shop at http://comicshoplocator.com/) or on Comixology for download.

For the Princess Crowd 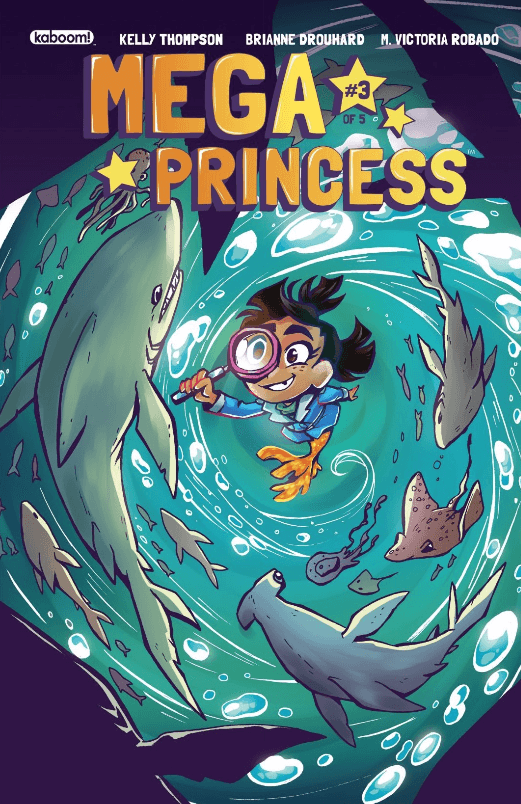 MegaPrincess centers on a genre-busting premise: what if the princess’ fairy godmother was a goth slacker who just gave out all the princess powers at once? You’d get MEGAPRINCESS. Our megaprincess is Maxine, who fancies herself a little bit Sherlock Holmes a little bit Precious Ramotswe, isn’t interested in attending royal parties and entertaining at her own birthday. She wants to solve mysteries. Then a member of her family is kidnapped and the most important mystery of all presents itself. With the help of her horse Justine, a few inventions, and all of the powers ever given to a magical princess, she sets off to save the day, leaving her worried parents behind.

Kelly Thompson has A-Force and a Hawkeye run to her credit, so you know she’s got the strong female character thing down. Drouhard and Robado bring a fun, whimsical art style to Maxine’s pigtails and Justine’s snark. All of which make this a good comic to read with your kid. 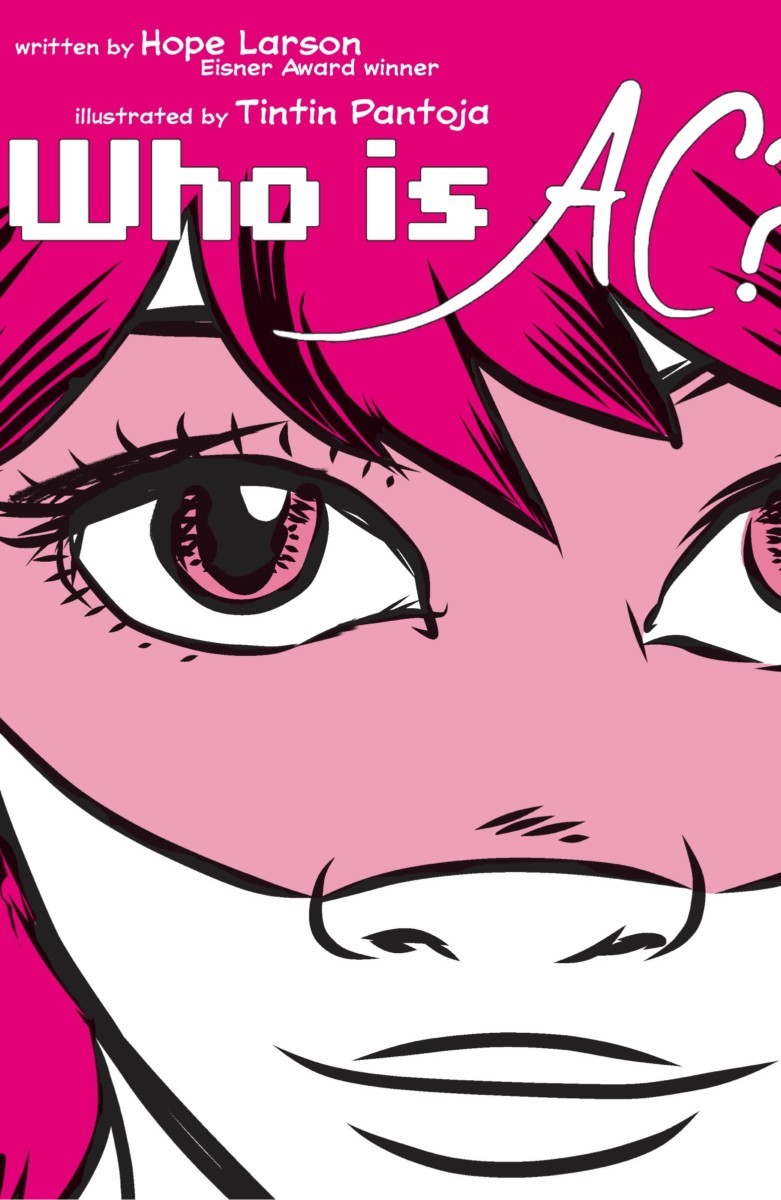 You want a coming-of-age, girl protagonist, girl-centric graphic novel? Here’s one to check out. Hope Larson’s  efforts alongside fellow female artist Tintin Pantoja produced “Who Is AC?”, the adventures of a teenage girl named Lin who strives to find a niche, a place for herself after she and her family moves leaving behind everything she knows.

Lin stays busy with all her different hobbies, convinced not to be stuck with the sads. She cosplays with her friends (or rather she did before the move). She’s an avid biker, exploring the city by herself. She even aspires to one day to a published author, writing her own stories and self-publishing her own zines. Some think she’s a bit unorthodox, a bit odd. But probably the most unusual factor? Turning into a superhero via magical girl like transformation through the powers that be through her cell phone! Think magical girl meets sci-fi: flower petals and wifi signals.

Oh! And let’s not forget that fact that our protagonist is a biracial girl who manages to save the day and still attempt to sail through most of the pitfalls of being a teenager. This graphic novel’s themes touch upon feelings of alienation and pressure to fit in placed upon by parents. Slightly darker themes include the importance of not keeping to yourself during times of grief and the cyber dangers of online safety ,in this case: keeping a personal blog.

A short read but a great addition to any teen girl’s growing graphic novel library. It has that manga influenced art style paired with a story that will catch the attention of  young women looking for a comic rec that features another girl of color doing her thing. While not the strongest contender in the magical girl comic scene, this offering does have some narrative struggles, Lin is a memorable character and the book touches upon some still relevant issues. 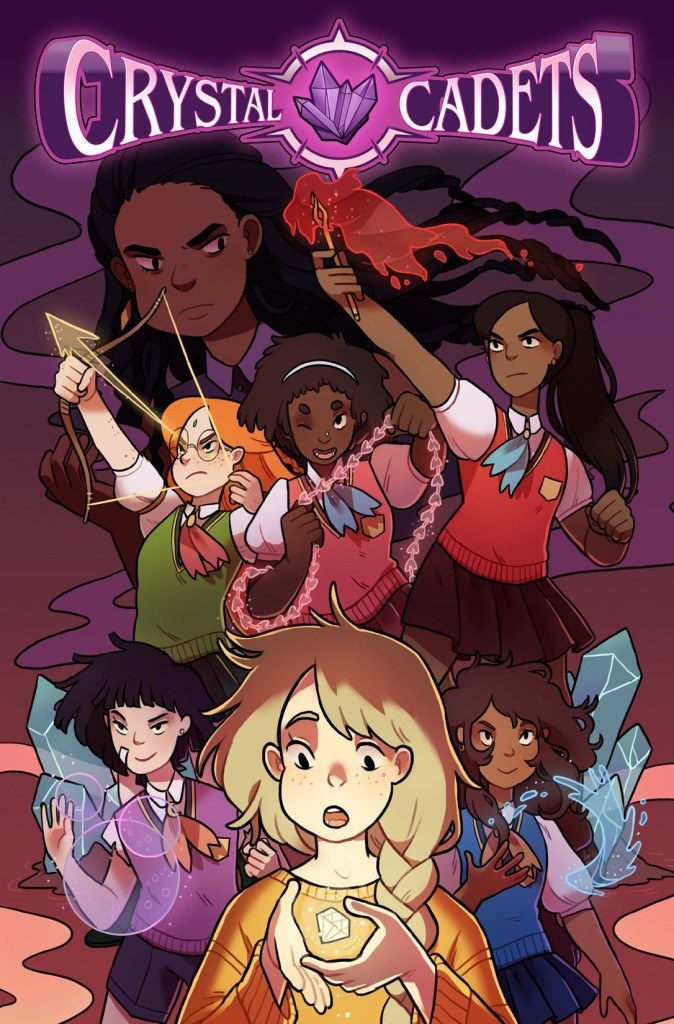 This is a comic full of great magical girl fun: a squad of girls, each with a signature color, weapon, and mystical beast, fight off shadow dragons in the school and around town. While the story centers around Zoe, the newest cadet, there’s also another power user who’s masquerading as one of them, so there are twists throughout.

It features the typical multi-racial, multi-ethnic cast that — when used in magical girl comics — makes the imagery and characters super accessible. If your child is looking for more to fill that Sailor Moon hunger, or if you’re looking to diversify their Magical Girl reading list, this may be a good one to try. 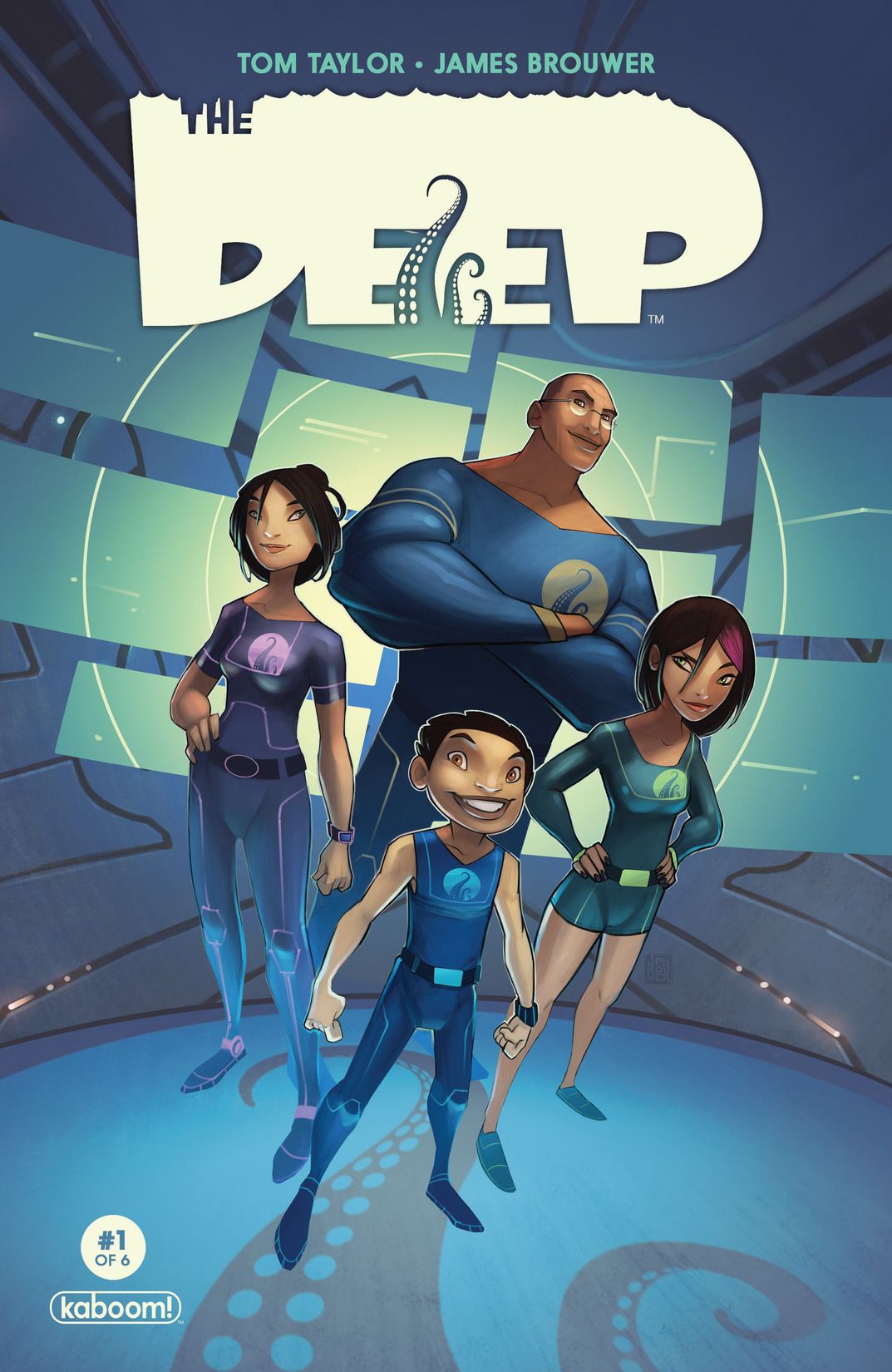 This comic came to my attention because of the Netflix series based on it, also called The Deep. The plot is the same — the multi-racial Nekton family lives aboard their state-of-the-art (and super shiny) submarine, the Arronax. They travel place to place investigating under sea anomalies and saving rare creatures. Along the way they discover that there is more to some myths than they thought. This is a comic of family adventure and exploration, starring William and Kaiko (the parents) and their kids Fontaine (the older, exasperated sister) and Ant (the younger, spunky brother).

Tom Taylor has a grip of other comics to his name (Injustice: Gods Among Us, All-New Wolverine, Star Wars: Adventures) as does James Brouwer (Justice League Beyond), so neither of them is new to the comic book game. Their all-ages offering is a hit. The run that’s out now is slightly different from what is in the TV show, so it won’t be a direct repeat. However, for reluctant readers, they can watch the series and read the comic together. 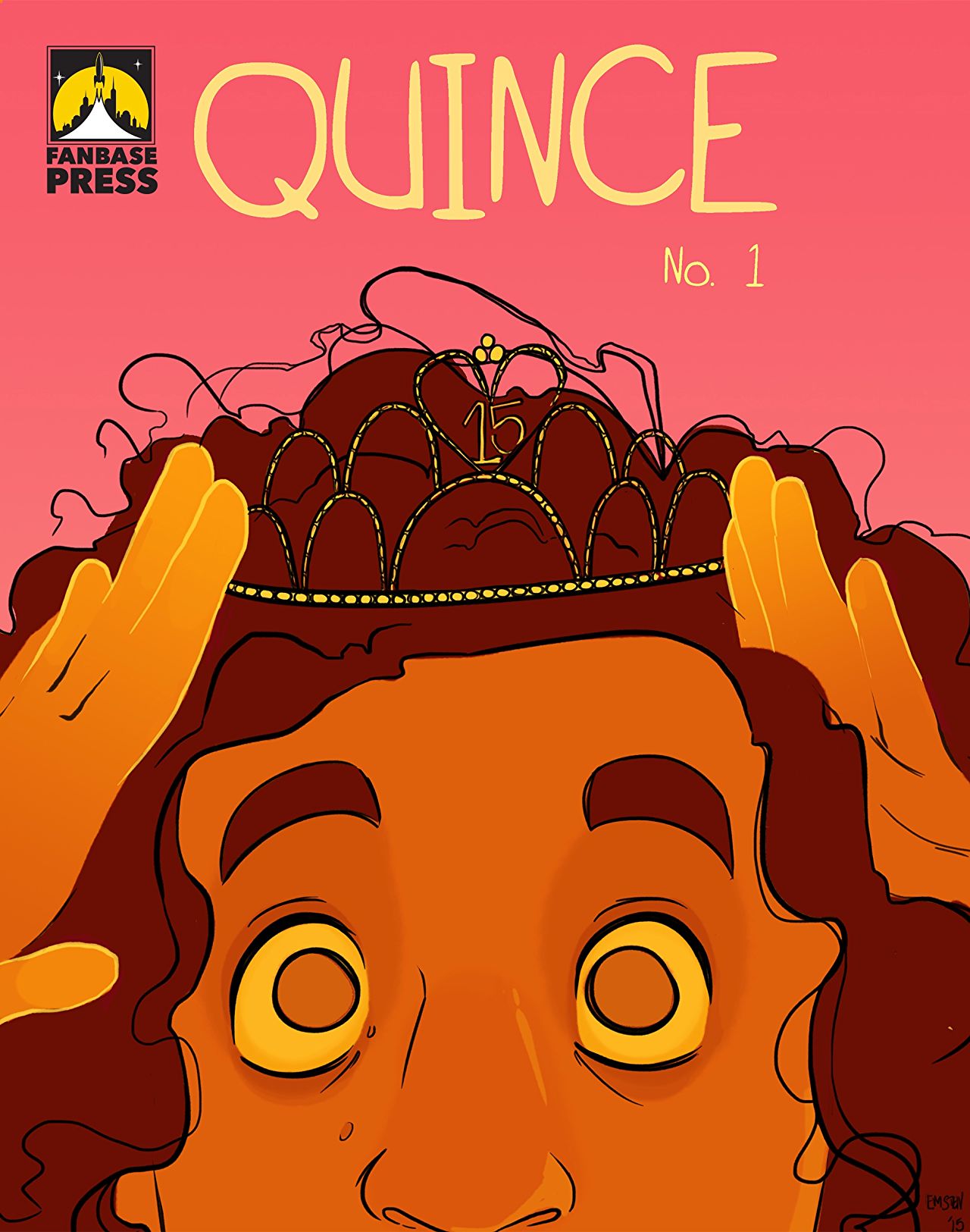 “If you can survive being fifteen, you’re a superhero.”

I could tell you that Fanbase Press’ Quince is a superhero story but that wouldn’t do the comic justice at all. Lupita aka Lupe is hyped about her upcoming quinceañera, the celebration of her fifteenth birthday, and discovers she has gained superpowers such as super strength and flight!

Quince is an origin story of a superhero that’s NOT tragic but several parts relatable and hilarious. Available in both English and Spanish with a physical volume of all the issues coming this Fall this is not a comic to be missed. If you’re looking for an all ages indie comic with a WOC lead and a creative team that is majority female here’s your heads up that this book may be up your alley! It is available in both English and Spanish. Update: it’s  getting a special edition with a load of awesome extras too as part of its publisher’s ten year anniversary! 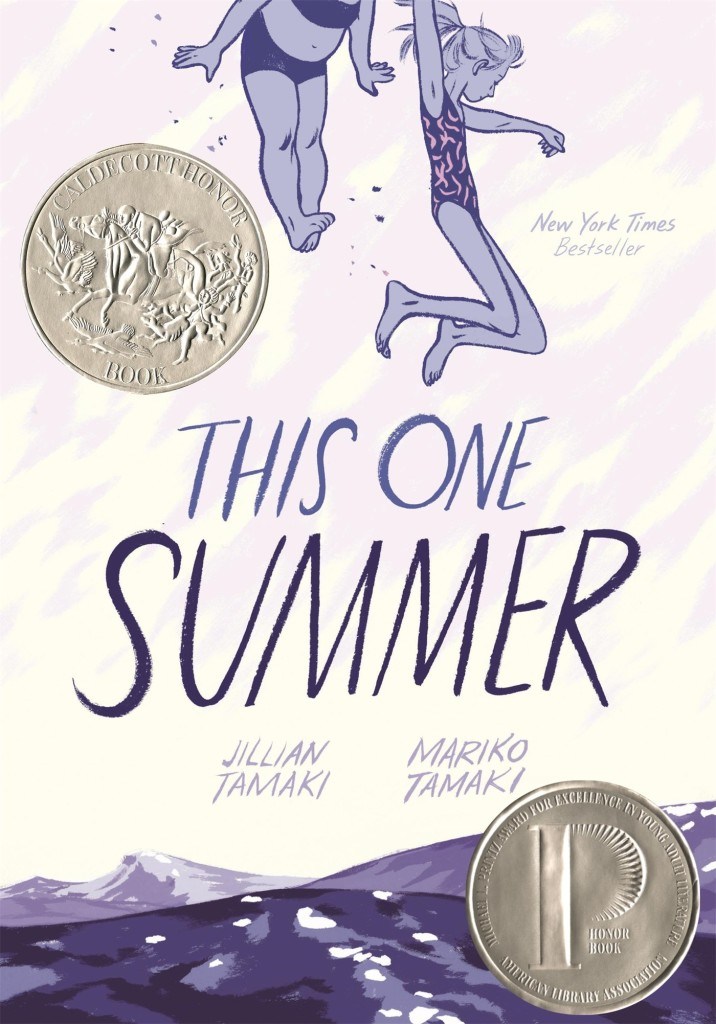 This graphic novel chronicles the summer of preteen Rose who travels to Awago beach every summer with her parents for vacation. It’s a mainstay. It’s concrete. It’s a tradition ever since she can remember. It’s also where she gets to see her best friend Windy, the yin to her yang and together the two girls set out to enjoy the summer together like always.

But this year is different. Rose’s mother is sullen, withdrawn and distant…she won’t go anywhere near the water. Her behavior is baffling and starting to rub Rose the the wrong way. She is also watching her parent’s marriage which is a hair trigger away from an exploding–so she’s walking gently as if she’s just wandered onto a minefield.

This One Summer is about growing up. It’s a graphic novel that teaches us that nothing can stay the same and that there’s transition periods in life. And while there are places in time we can never get back to perhaps we can stand and find ourselves on solid, new ground to make more memories with the people we love.

Awarded a host of awards and honors including the Caldecott Medal, an Eisner (Best Graphic Novel) and the Gran Guinigi award (Best Writer), this affirms that stories about teen girls written and illustrated by women speaks volumes and deserve to have a seat at the table.

We didn’t include any DC/Marvel comics here. Not because we don’t love them — I’ve got Ms. Marvel on permanent order and my daughter is cray for DC’s Super Hero Girls — but because those comics don’t need our voice. 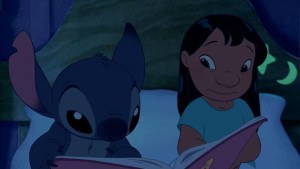 We would love to grow this list to include as many titles from creators of color, or underrepresented writers/artists, as possible. We know more of those comics are out there. Inclusion happens both on the pages and behind them. That said, we’re only recommending comics here that we’ve read and loved. If you’ve got a comic in this category, hit us on Twitter with your recommendation. If you’re a writer or artist on such a comic, let us know about your title, maybe we’ll add you to a future list.