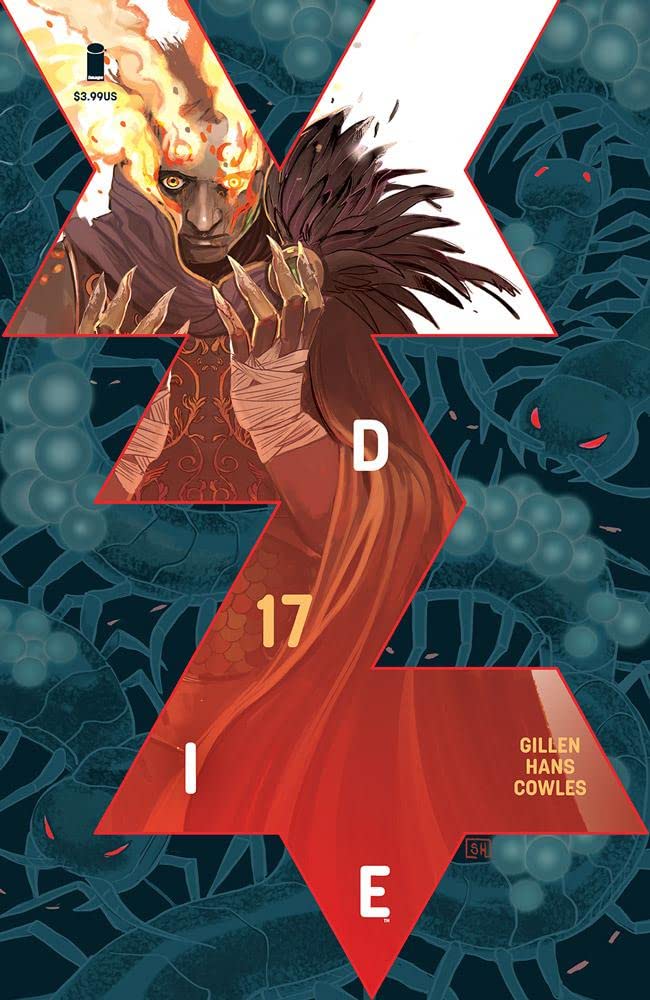 Die is in its final arc, and that is such a weird sentence to be processing. Since the first issue way back in 2018, Die has been one of the best dark fantasy offerings on any shelf, comic or otherwise, and the TTRPG-inspired narrative has since revealed itself to be a much more sprawling story that delves into literary fiction and canon, the power of imagination, and the complicated relationships that can exist between people who have experienced shared trauma. Die has remained the top of my reading list whenever it releases, which is why I also feel weird when I say that the first half of Die #17 didn’t quite hit the same way for me. Although, there is a very satisfying catharsis that quickly course corrects.

Die #17‘s first half mostly deals with the party dealing with H.P. Lovecraft, which is a perfectly sensible addition to the story that has featured Charlotte Bronte and H.G. Wells, especially considering the iconic mythos of Lovecraft. And the proxy that exists within Die serves a very specific role as a harbinger for things to come, but I also am not entirely sure how well the text in the comic interrogates the totality of Lovecraft, particularly some of his more abhorrent viewpoints. In the pages of the comic, there is simply a passing comment on Lovecraft’s racist beliefs. In the back matter, Gillen makes a much more coherent examination of Lovecraft that I don’t think quite translated on the narrative page for me, but it’s a daunting task to fully dissect the corpus of the progenitor of the Cthulhu mythos, especially when the world of Die is presenting a larger existential threat. It’s an odd critique, but I could have used just a bit more analysis in the main text (although again, the resulting incidents that followed did assuage some of these feelings).

Past the opening conversation though, Die #17 continued on its grim way in elaborating on the twisted mechanics of the world and setting into motion an emotional roller-coaster as we barrel to the end. The party has been through so much and there are still so many things that are uncertain about how their mission will turn and their ultimate survival. We have come to care for Ash, Chuck, Matt, Angela, and Isabelle, and maybe even garnered just a little sympathy for the Fallen Sol, but we also understand all of their flaws and the cracks in their facades, the dissonance in their true selves, and the personas they have been forced to don to survive the hellscape. As their actions continue to have compounding consequences and their circumstances grow more dire and existentially exhausting, Gillen continues to weave this brilliantly dark narrative that demands to be finished.

And may I just say that Hans deserves all of the laurels for managing to capture the twisted fantasy that previously existed only in Gillen’s head. The artwork in this issue is a series’ high point, which is saying something considering how many times I thought the series had a reached a pinnacles; however, Hans just continues to outdo herself. Some of the brilliantly composed and haunting pages in the comic perfectly capture the cosmic horror in play while also conjuring many images that wouldn’t be out of place in an TTRPG source book.

I don’t think Die #17 is my favorite issue in the series to date. I think that accolade either goes to the brilliance that was Die #5, and I think my favorite moment is still the conclusion to Die #14. I think Die #17 serves an important function in the grand scheme of things. While parts didn’t quite connect as fully as they had done in the past, Die #17 as whole is still a tour de force, and I remain ready to have more content from Gillen and Hans grace/scar my vision.