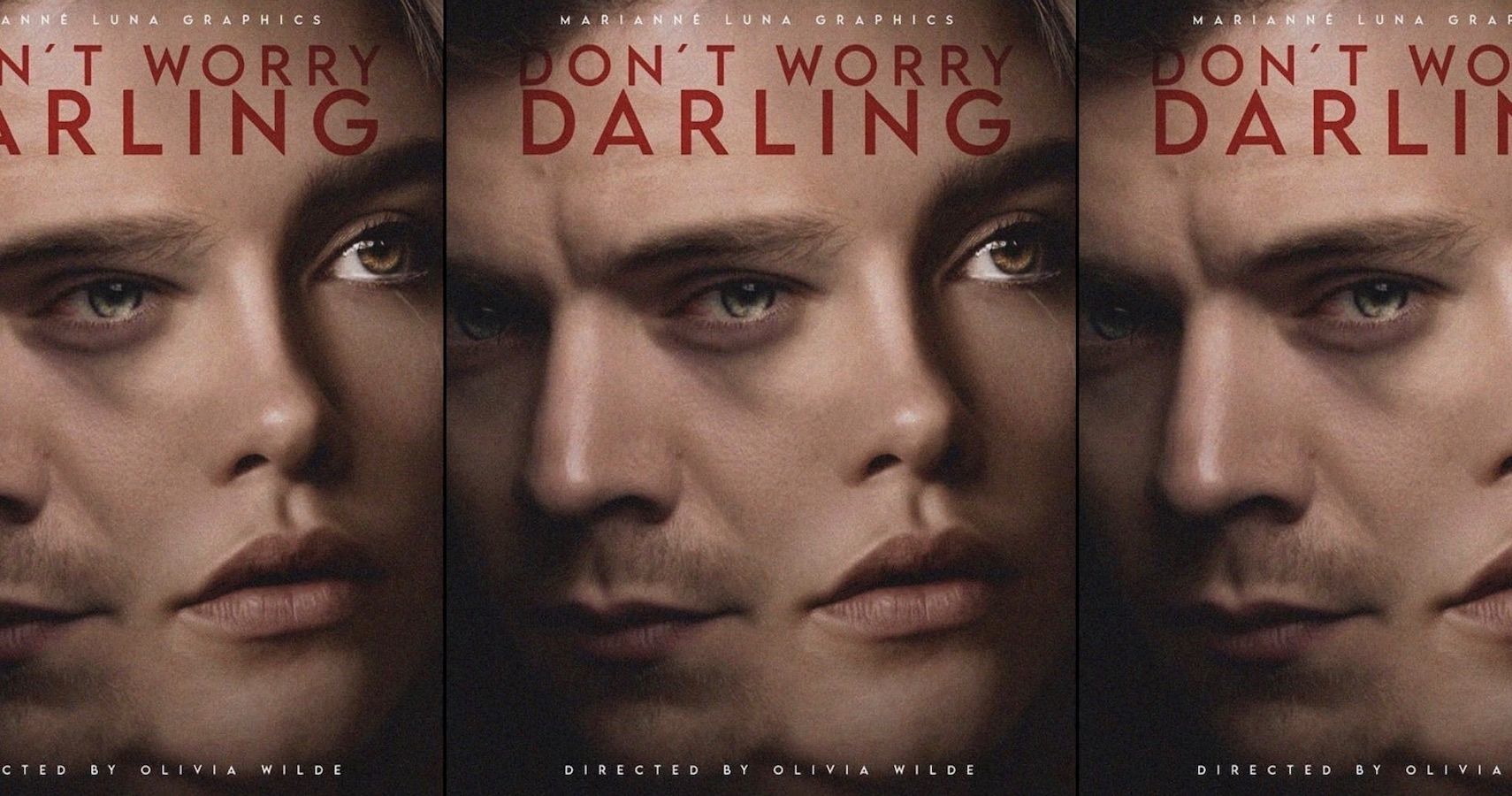 Don’t Worry Darling is a well-acted dystopian reality whose press tour drama really sells something the movie doesn’t quite have.

We’re getting to a point in movies where the outrage of inequality is no longer just wearing black to the Oscars. The fruits of the labor are making their way to the big and little screens, and films are becoming the change they want to see in the world. Or the change the world has been demanding it makes. Unfortunately, some of the TV shows and films have you feeling…to quote The Matrix, “not like this…” The trailer of Don’t Worry Darling was giving very Midsommar, very Devil’s Advocate. It showcased a little bit of horror, a little bit of the avant-garde, and a STACKED cast. You may have heard about the film from its slew of rumors. You might not remember it by name, but you’ve heard about the mysterious tensions and speculations revealed during the press tour.

So, let’s get to the elephant in the room; what is with all the drama!? Did Harry Styles really spit on Chris Pine? Was Shia Lebouf really fired, does Florence Pugh hate Olivia Wilde? This isn’t a gossip column so I can’t say that I have all of the answers, but this Vice article runs down exactly what the drama is really about. While it sounds like Pugh wants to focus on her performance and Harry Styles probably didn’t spit on Chris Pine on stage, the real-life drama surrounding this film is more intriguing and mysterious than the film itself. Is the drama real or a publicity stunt? Since no one really knows any horror stories from set or any real beef, it could all just be a way to get people in the seats.

Before I get into the peaks and pits of the film – there will be light spoilers ahead so if that really concerns you for this film, you’ve been warned.

Truth be told, Don’t Worry Darling is a Stepford Wives tale retold at an age when we don’t need 1950s suburbia to tell a feminist story. The movie could have flipped the idea on its head in a provocative and forward-thinking way but in the end, it’s almost exactly what you think it is. The film looks at what happens when men are fed up living in a woman’s shadow. Contrary to what many believe, I am always rooting for movies to be beyond amazing. So, I even chalked this movie up to a commentary on the reversal of Roe v. Wade and women no longer having agency or control over their bodies. But that is me projecting and giving something to the film that most likely was not the intention. The problem is the movie uses a cast that has more talent than the story can hold and brings yet another white-centric feminist POV. If you’ve read my She-Hulk article co-written with my fellow nerd Frantz Jerome, you know this is an issue that I’ve recently explored.

Let’s ease you into it all and start with the facts. The Stepford Wives in all of its re-tellings has always had stellar casting. Peter Masterson in the original with Kathrine Moss (The Graduate) to Nicole Kidman, Christopher Walken, and Bette Midler in the 2004 remake. This film is no different. Florence Pugh has proved time and time again that we will never know to what bounds her range has. Harry Styles, who is better known as the heartthrob boy band member of One Direction, has been really making a name for himself in the movie world. As we know, he even joined the Marvel Cinematic Universe as Eros in the Eternals film.

Pugh plays Alice Chambers wife to Styles as Jack Chambers. They are living in this 1950s experimental community of Victory California where the men are working on a very important project for the government. Every morning the women make them breakfast and all the men leave at the same time to their wives waving as they drive off into the distance. While the men are at work doing…whatever – because the women actually don’t know and can’t ask questions, the women stay at home cleaning or going shopping or taking care of the kids. Yea, it’s all laid on pretty thick. Now, this community is created and run by Chris Pine’s character Frank. The style, roles, and responsibilities, their status, and their entire way of life is manufactured by this man. That right there is a little straightforward on the message. Frank runs the place with a cult-like energy. People fiend to be near him, they fawn over him.

In all of this, there is one rule in the community…you don’t go beyond the community bounds. The desert location makes it very undesirable anyways. But in all this something is off. Like all of it, the whole damn thing. Why are we here? Why did we agree to this?

Ain’t That a Bite

As we learn more about the characters, Alice (Pugh) is best friends with Bunny, Olivia Wilde’s character. She’s like a den mother for some reason. She knows everything and really keeps the ladies in line. When they sound like they’re getting curious, she shuts them down. But in the midst of this, there is Margaret played by Kiki Layne. The only Black character and what seems to be the only Black family in the community. She becomes quickly “unhinged.” Margaret knows something is up and becomes the catalyst for the unfolding of Alice and the road the the ‘big’ reveal.

As the story progresses, Alice begins to see things we don’t quite understand but are visually intriguing: images of synchronized swimming, Frank’s voice repeating his ideals or mantras ringing in her head, and visions of being suffocated. Yes, the metaphor of the world closing in around her personified – and quite literally being suffocated. As Margaret unravels so does Alice. Again, we see the commentary of women being so easily dismissed as crazy and needing ‘fixing’ throughout the film.

Herein lies my Black Nerd Problem. Margaret doesn’t get to be a person. She is truly a mechanism to drive the main character to her imminent ‘madness.’ We see her in moments and at the precipice of what we are to believe is insanity. While I’m all for having Black characters present, having them exist solely to go “crazy” and be the crux of the white character’s arc feels a bit ick. If we think about the time. It’s the 50s and in an intentional community they probably don’t even welcome the ‘Blacks’ so.. accurate I guess.

The film is not without its representation. The cast also consists of characters of Indian background and Chinese background with Asif Ali playing one of the husbands and Gemma Chan as Frank’s wife. There are Black and brown people present. Execution is a big factor for me and if I were to switch some roles around, I would have cast Kiki Layne as Bunny and Olivia Wilde as Margaret. This would have alleviated some of the trauma connected to Black bodies in film and given her a more prominent role. Still would have played into the ‘Black best friend’ trope (who definitely drank the Kool-Aid), but not the crazy outlier who is made an example of.

Got it Made in the Shade

As bad films go, I wouldn’t say this is completely one of them. Where this movie excels is the performance. The cast out acts the script at every beat. Which makes you feel the intensity, but unfortunately it does not match up with the film as a whole. I found myself feeling moved by Pugh and Styles’ fights and then quickly feeling like why am I feeling so intense? It was like watching A Marriage Story, very dramatic and very well acted but for an average story. That aside, every actor gave this feature their all. Chris Pine was seductively creepy, and we’re surprised to see actors like Nick Kroll (Big Mouth) and Kate Berlant (Sorry to Bother You) all of whom really immerse themselves in the world. The visuals strike you and pull you into wanting to know more, wanting to understand really what is behind the curtain.

Once the truth is all revealed, it all feels very meh, and you find yourself saying ohh ok – that’s a decision. The editing confused the watcher at times, and it may have been on purpose so the audience feels like they are trapped in some weird nightmare right along with the main character. Sadly, the end was a high-octane car chase with not a very big payoff. The twist does not diverge enough from the Stepford Wives to make you really buy into the experience at a deep level. All of this is fine. It makes it a fine film.

For me, the story is written, it seems, with whyte feminism in mind: The male domination narrative and the idea of perceived control and the woman prevailing and escaping the nightmare of someone else’s paradise. This is yes, a story that is not extraordinary and women should have the ability to just create. We can make films that tell the story that moves us and have a message that doesn’t have to break a mold or live up to some higher expectation. This is all true. For whyte women, that is much easier to accomplish and to get a cast of their dreams. The advancements in the world are happening, and I’m excited to keep moving the needle. This time around if you want a feminist story that goes beyond, makes you feel seen, and have you feeling powerful, head to The Woman King. You’ll wanna watch Don’t Worry Darling for just an interesting take on a classic feminist story.

Cover image via The Union Journal