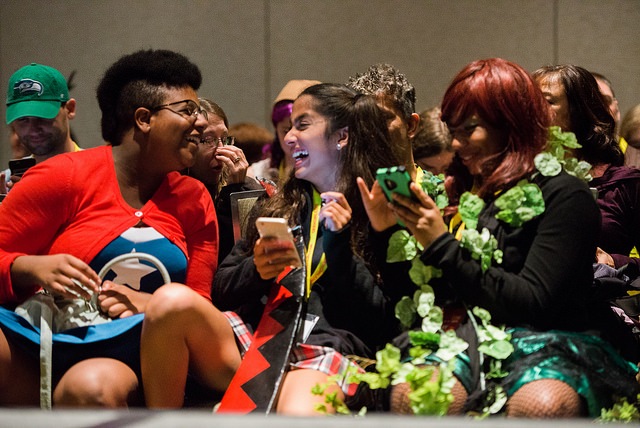 Convention season is year-round, but there’s a definite uptick in my neck of the woods in the Fall. Monthly, there is some new Comic Con offering opportunities to meet TV and movie personalities, listen to folks chatter about their favorite things, and have your comic book signed by the best in the business. Oh, and cosplay! Always more cosplay!

Here on the West Coast, I’m particularly excited about two upcoming conventions that focus on the intersection of nerdity and inclusion. If you’re in the area and have a few bucks in your pocket, consider attending. Conventions have really become a cornerstone of the nerd experience.

GaymerX is the first ever LGBTQ-focused gaming convention. While many of the panels revolve around queer issues or queer game developers, GaymerX and the GX events are made for everyone and everyone is welcome! Founded in 2012 by Matt Conn via Kickstarter the convention is in its 4th year, having also spun off an Australian version this year.

The con features more than 100 speakers, many from BioWare and Bethesda. There will be competitive gamers and visual designers on panels as well, tackling significant issues, like accessibility in gaming, the evolution of the gaming industry, and the art of characterization.

Outside of the panels and events, the convention floor will be full of game previews from Blizzard, Oculus, Microsoft, Harmonix, Atari, and Funomena; group tables with information on Women in Games International (WIGI), Lesbians Who Tech, and the International Game Developers Association (IGDA); and recruiting tables from large game and tech companies who will be taking applications on-site.

Whether you make or play games, cover them as press, or upload Let’s Plays to YouTube — you’ll be welcomed with open arms….Come on down, meet new people, have fun, and celebrate our shared love of games. — Matt Conn (CEO of MidBoss and Founder of GaymerX)

The GaymerX Convention (GX4) will be held at the Hyatt Regency in Santa Clara, California September 30th – October 2nd, 2016.

The next weekend is Geek Girl Con up in the Northwest. Founded in 2011 following the spark of an idea from San Diego Comic Con, GeekGirlCon keeps getting better. It is a unique convention that includes *girls* and young women as the target audience, regularly seeing more than 500 girls under 10 attend over the course of the weekend. GeekGirlCon focuses programming on women contributing to science and technology; comics, arts, and literature; and game play and game design. The goal is to connect geeky women worldwide, so they often host events at other conventions and in the greater Seattle area.

The featured guests include, Ashly Burch (of Life is Strange), Jennifer Paz (of Steven Universe), and Natalie “Moxie Girl” McGriff (9-year-old co-author of The Adventures of Moxie McGriff). Our very own Carrie McClain will be on a panel about appropriation and adaptation, along with a variety of scientists, illustrators, costume artists, and geek thinkers. There is a focus on the Women of Pixar which will be amazing for any animation fan and several hands-on building projects to participate in.

This is a convention for shopping. Books, pins, decals, and stuff stuff stuff will be on my agenda for the hours I’m not sitting in panels. I? Yes, you got that right, I’ll be there too! You better believe I’ll be at every Science Fiction/Fantasy panel soaking up the information and getting my reading list in shape. I’m really looking forward to this weekend!

No “Geek Cred” is required to be part of GeekGirlCon, whether staff member, volunteer, fan, or con guest. Anyone who self-identifies as a geek and supports the achievements of women in geek culture can be a part of GeekGirlCon. — GeekGirlCon Mission Statement

GeekGirlCon will be held at The Conference Center in downtown Seattle, WA, October 8th & 9th, 2016.