We get a unique episode this week. One that could be considered “filler”, with most of the action taking a back seat. In lieu of Michael Bay level explosions and smack downs, we’re blessed with quality writing and the unexpected return of the greatest Flash cameo, Captain Cold! We got a bounty hunting visit from one of the Earth-X villains and an offensive showdown that gave us some cool combat scenes.

We start off with the fallout from DeVoe’s absolute massacre of all those lives and powers. Harry and his addiction to the dark matter infused thinking cap 2-piece combo has resulted in the loss of his intelligence. Gideon in the time vault hittin that boy with Crooklyn level news. Too-cool-to-cry Barry, sits in therapy next to Iris Da Melanin Gawdess, with her arm in a sling after taking a katana to the chest like a straight G! Dr. Finkle sees right through Barry’s tough guy routine and hits him where it hurts, tryna drum up suppressed feelings. Ol girl runs through the Manut Bol lengthy list of friends and colleagues that Barry has seen catch grizzly fades. Crickets. They end with a “same time next week”, unless they need to come sooner. On his way out she casually mentions that everyone grieves differently and you knoooowwww that shit is gonna come back to haunt our boy!

S.T.A.R. Labs: Cisco and Caitlin are going through it. Cisco mourns and is upset that he couldn’t protect Ralph. So he recruits Harry to create a second thinking cap cuz 2 brains are better than 1, not knowing the whirlwind of hurt Harry’s going through. Cisco wants to give it a spin asap, turns it on, feels a tingle, yells out PIKACHU!, then it shorts out. Harry makes up some excuse about lack of materials as to why he cant fix it and we move on to the next member of Team Flash going through it. Our chilly team member got her powers snatcheth. Caitlin runs all the tests, but there is no sign of Killer Frost. They were deadass becoming besties too.

Thinker Lair: Having absorbed every meta and they moms, Marlize and Clifford DeVoe are out here toasting to the good life. There are no issues with DeVoe’s deteriorating condition and he even had the audacity to say he could fit another meta bus of powers in his new body!! Those some wild elastic cells. DeVoe is quickly back on his bullshit, ready to move forward with his evil ass ‘new age of enlightenment’ plans. Marlize just tryna take a moment to relish in this win and enjoy life as husband and wife. She hasn’t seen the man she fell in love with for months, but he ain’t about that sentimental shit no more. Down to business DeVoe keeps alienating his wife and I cant wait for her to turn on him!

S.T.A.R. Labs: The sirens go off because DeVoe is about to go after Fallout, the only bus meta he hasn’t absorbed yet, so they decide they have to do something DeVoe could never predict or expect. Don Barry makes the call like a gangster to hit up ARGUS for some underground help and breach to Earth-X aka Nazi Earth. They save Leo Snart from getting murked (again) and bring him back to OG Earth to help make sure Fallout doesn’t erupt during their grand plan. Nice plan, how bout you make sure no one follows ya through breaches, cuz you lames done taken Nazi Laurel Lance back as a stowaway.

They create a plan to ship Fallout to the secret facility and keep him from going nuclear with their remix Cold Guns and Captain Cold’s OG gun as a last resort. Caitlin gives them all cocktails to ensure their internal organs don’t get fucked if he starts to radiate. At the same time, Snart sees that Barry is getting over Ralph’s death way too quick. He offers a sprinkle of advice, but you know it’s going to take Barry getting his ass handed to him to understand he can’t run from his feelings.

They say “Let’s go get our guy!” and Nazi Black Siren hears every word. Then she goes to make sure these silly heroes don’t waste a perfectly good nuclear bomb. Homeboy dressed in a hazmat suit on steroids, strapped in the back of this 18 wheeler like an astronaut descending through the atmosphere upon re-entry.

Inside the big rig, Caitlin explains to Leo that she lost her other half. He drops some kind words on her and all I could think is that this man is out here serving therapeutic advice like a beast! Dr. Phil aint got shit on Captain Cold. Joe lookin like Shaft driving the rig when it’s lifted then dropped. DeVoe pulls up and starts serving up shitty puns about always being a step ahead of The Flash, evident in his attempt to knock DeVoe out with that soundwave producing “toy trinket” that fails miserably.

DeVoe changes his voice to Ralph’s, which causes Barry to freeze like T’Challa when he sees Nakia. Our boy is thrown through a wild Thinker-killing-Dibney flashback loop and about to get bodied. Suddenly, Nazi Laurel takes out AYEBODY with her extremely powerful sonic waves and kidnaps Joe, Caitlin, and Fallout in the rig then brings them to CCPD for judgement.

Thinker Lair: DeVoe returns tight as a Chinese finger trap because he didn’t predict the correct outcome of that skirmish. Flash was supposed to take out Siren. Marlize comes in lookin like a Spring snack and a half but DeVoe got nary a fuck to give about her attire. Basically, DeVoe tells Marlize that her role, until the enlightenment has occurred, is to be his technician, lap dog, personal engineer and archaic subservient housewife who has bent the knee. Then this mufucka has the audacity to tell her to get out of that sexy sun dress, insulting her rekindling attempt. Wifey does the dash in the whip and tells the computer with a body that he simply can’t account for the way someone is feeling, and that’s why his outcome was wrong.

Barry Drags His Feet and Gets Dragged

Snart calls out Barry for what happened out there. He wants the truth about how Barry is feeling. Finally, Barry admits that he saw Ralph getting repeatedly murdered while facing Thinker. Barry just wants to lead his team to victory. Leo counters by telling him he’s gonna lead his team to their deaths. Then Snart pulls out the fact that Barry’s trying to outrun grief because this particular loss was closer than the rest. 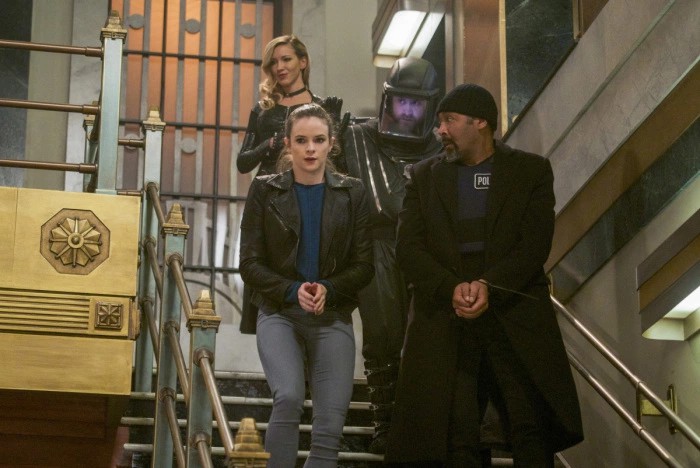 Siren-X brings Fallout to CCPD and makes him take his helmet off, knocking out the entire building except Team Flash, thanks to their cocktails. Barry rushes in to stop her and they finally show how a villain can get the legit drop on someone as fast as The Flash. Siren-X hears his soundwaves coming and blasts him into next Tuesday on sight! Snart tells him to deal with the pain as flashbacks pop in and out of his head. He shakes the hesitation and hits Siren with the LeBron shoulder in the paint, knocking her out like Craig did Debo. Cait and Snart grab the cold guns and cool Fallout down. They transport homeboy to the ARGUS facility that they know DeVoe is aware of!! Why they didn’t come up with a new plan is beyond me.

Snart considers this visit a job well done and runs off to marry his boo. He departs with some fine words for Cait and Joe. A beautiful comment about Cisco’s hair and real ass bars for Iris and Barry. The couple are off to see Dr. Finkle for a another session, this time at Barry’s request. In the end, Barry breaks down saying Ralph trusted him and that Dibney was his responsibility. He thinks he failed his rookie hero and is the reason he’s dead. He feels guilty about never being able to tell him how proud he was. It took a while but Flash finally succumbed to his emotions and let it all out. Therapy for the win, once again.

Caitlin doesn’t want to live without Killer Frost in her life. She’s still buried inside her, Cait just has to figure out how to get her to reappear.

Harry tries to run off but Cisco drops bars and reassures him they’re gonna find a way to get his brain back.

DeVoe’s obsession with seeing this enlightenment come to fruition and desire to simply utilize Marlize for her talents urges her to say, “I see that now, more than ever before.” His lack of emotion and sub-zero vibes with his wife lead to real tears. BETRAYAL IS IN SIGHT!

Cisco tosses Snart a breach opening device so he can come back whenever he wants. Guess that decision to hang up the Cold Gun was a lie!

Realness of the Episode: “You’re Vibe, Allen’s The Flash! Who am I? My only job is to be smarter than the villains who want to hurt this team.”

Quote of the Episode: “Like it would take Jack Ryan, two Tom Clancy novels to find him.”