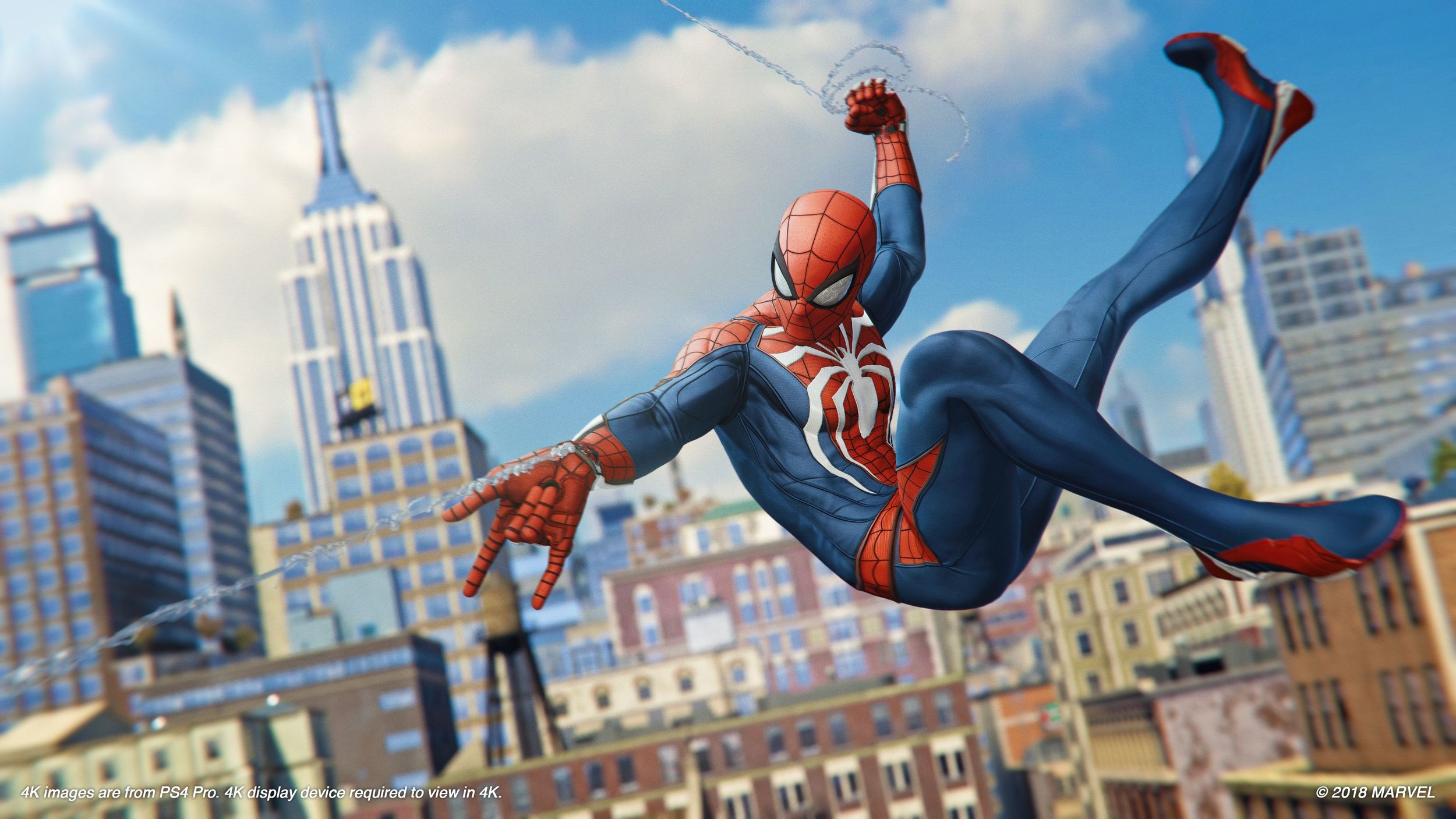 It’s about to be 2020, and I can’t believe we aren’t oversaturated in Assassin’s Creed-esque superhero games. Hear me out, I don’t want to sound ungrateful but… we’ve beaten criminals to a pulp in the streets of Gotham as Batman, and swung through the skies of New York City as Spider-Man. Why don’t we see more games like this with our favorite heroes, specifically ones that take place in an open-world? It seems like a gold mine of potential, yet I can only think of a few from the past decade or so.

Of course, superhero video games exist. And there’s plenty of really amazing ones. I’m particularly excited about the Avengers one coming out next year, even if Captain America looks like he pieced together his uniform at an “Everything Must Go” Big 5 closing sale. But it ain’t open world. At least I don’t think it is. We don’t have enough of those in the superhero genre. Like, I want every square inch of the map available to us from the moment we start the game, whether we’re ready or have reached that part of the story or not. Give it to me.

There are a few games that come to mind that’ll serve as the template for what I’m talking about. This is what I would want in an open-world superhero game and if I don’t get it, I… probably won’t do anything about it.

The Batman Arkham franchise started out in a contained environment, and through three games (not including Origins), blossomed into a true open-world habitat where it allowed the players to fully embody what it feels like to be Batman in an ever-changing world. By the time we got to Arkham Knight, we had mastered the controls, gotten familiar with the characters, and learned how to take down most of the criminals. And then we were let loose to explore and save Gotham at our own pace.

Following in the Arkham games footsteps is Spider-Man PS4. This was one of those games that I was looking forward to basically since it was announced. There have been a lot of Spider-Man games, but this one felt different from the jump. Primarily because it dropped you unto a gigantic New York sized sandbox that was so similar to the real city that it was a little creepy. I should know. I’ve been to New York twice.

This is the key when making open-world superhero games. You need to provide the players with a sense of immersion. And there are a few important things you need in order to make it feel like a seamless transition from your greasy game controller to the snug fit of a supersuit.

One of the best things games is the learning/upgrade system. You gain XP, then spend it how you want as you get stronger and gain new powers. It’s a good lesson on saving your earnings and spending them wisely as well, as some powers you get will be more beneficial at certain times than others. This might be hard for characters that some might seem Over-Powered, as it wouldn’t always make sense for you to learn how those powers work when they themselves should already know. A good workaround for this would be to just give the character all their powers, but at a base level, and as you level up, you can make those powers stronger, and more detailed.

Imagine a Green Lantern game where you’re flying through the universe and have to whoop a gang of some Sinestro Corps members. You’ll start to rack up some of that sweet XP cause your will power is on 10. You’d then use that XP to get new constructs, longer ring charges, and a lengthier health bar. These things go a long way into making the experience feel authentic. It’s also a good lesson in capitalism if you really think about it.

Strongholds are my favorite part of any open-world video game. Back when I religiously played GTA:San Andreas and Saints Row, I did this before I ever progressed in the story. Waves after waves of enemies coming after you is a major adrenaline rush. But it’s also a really good way for you to get acclimated with the fighting mechanics in a relatively low stakes manner. Each wave gets harder, making you have to utilize different combos and powers. And then by the time you play the main story, you’re a pro. Another nice aspect of the Stronghold is that usually, these enemies hold a literal stronghold on the particular part of the city or world they reside in. So when you happen to be in that area, things are extra violent, which incentivizes you to hit up the sketchy looking warehouse and take them all out so you can make this part of the city safer for the NPC residents trying to make a living there.

Can you imagine a Superman game where Brainiac took over the city, and there were multiple strongholds around Metropolis full of Brainiac bots of varying difficulty, and you had to wipe them clean with your full range of Kryptonian powers to restore some peace to the City of Tomorrow? I really want this now. And I’m sad it doesn’t exist.

The player should also be able to customize as much as they want. Yes, this is a game where you want them to immerse themselves in this hero’s everyday life, but you also want them to have the illusion of control so they can craft what their version of what this hero looks like. Populate your game with skins from popular stories from over the years, and allow the player to unlock them in a myriad of ways. Spider-Man PS4 did this so well. There were so many suits. And I was so happy. It incentivized me to do things I normally wouldn’t waste time on, like taking pictures of all the landmarks in NYC. But I needed that Infinity War suit Got Dammit! So yeah, just gimmie an Iron Man game where you can unlock the Hulk-Buster armor by helping Bruce Banner create a new gadget to keep the Hulk at bay, only for it to backfire in both of your faces! Or something like that.

In addition to giving us classic suits from storied arcs, I’d even go so far as to let the player create their own version of a suit as well to really drive home the customization aspect of the game. Being able to switch between civilian mode and superhero mode would be a nice touch as well. Don’t underestimate people’s urge to roleplay. Like, oh, I’m just Steve Rogers enjoying myself at the Smithsonian, just reminiscing on old times. Oh damn, just got a SHIELD alert that Crossbones is trying to desecrate the Lincoln Memorial. Not on my watch, then BOOM just like that you’re riding down the National Mall on Cap’s bike, helmet on and shield on your back. I need this.

I can’t stress this enough. Don’t lock us into a linear playing experience. Let us stretch our legs in the world. You have no idea how much time I’ve spent just swinging around New York City in Spider-Man PS4. It was a great way to decompress and just relax, actually. And it allowed me to get familiar with the gaming mechanics in a more organic way that was more conducive to my way of playing games instead of just thrusting everything on me in the middle of a level. We all know how anxious that can be sometimes.

One of the fictional cities that would benefit most from an open-world would be Wakanda. It’s so beautiful and full of culture, and so unexplored compared to other fictional cities. I would love a Black Panther game where I could explore the Vibranium railways, the religious sites of previous Panthers, and Shuri’s lab. Please give this to me.

And to piggy-back on that last point, a way to really populate the world of the game and make it feel wide open is to introduce the player to side missions. One of my favorite side missions in Arkham Knight was when you had to track down a serial killer running loose in Gotham. It allowed you to use Batman’s detective skills and it was relatively low stakes. But it went a long way toward making me feel entrenched in this character. Some side missions will be directly connected to the story, and some won’t but they’re all necessary.

I love how in games like these, crime just breaks out on its own and it’s your choice whether you’re going to stop it or not. Of course, you always will. Swinging through New York or driving through Gotham on your way to your mission or a side quest, and something pops off on the way? It’s all up to you. This always really solidifies that I am this hero wholeheartedly. The lives of the innocent in my hands and I have the choi– no– the responsibility to act?! I sop that up like a biscuit in some honey. I, for one, would really like to be zipping through Central and Keystone City as the Flash only to be alerted that a Captain Cold led bank robbery is happening across town. They’ll never see me coming.

I’m not a game dev, but it doesn’t seem very hard to make these types of games more often. (Maybe that’s why I’m not a game dev.) We literally have a blueprint with Spider-Man PS4 and the Arkham trilogy. I can’t imagine that there isn’t an audience for this. I mean, Assassin’s Creed comes out once a year and it’s essentially everything I just described. Just reskin that with Wonder Woman or Ms. Marvel, and give us a good story and all of a sudden you’ll be swimming in so much money you would might build a time machine so you could go back in time and make yourself make this game years earlier.