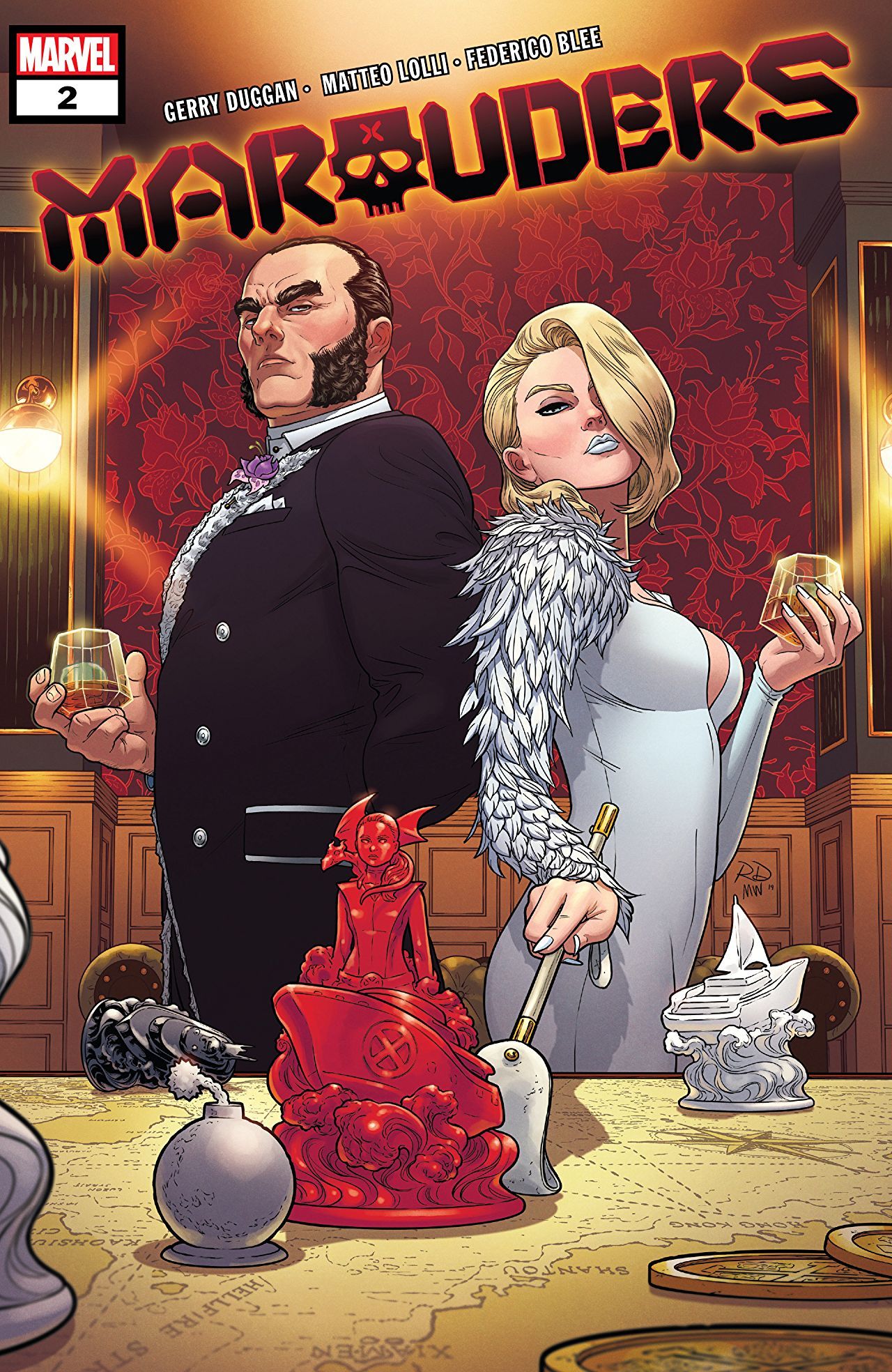 We’re deep into the Dawn of X now, fellow Black X-nerds, and it is time to dig deep and get serious. The hype has passed and over the next several months, some of these books are going to stand and some will fall. I’m not going to pretend to be able to predict which is which. I’m not even sure that the ones I like will survive the culling. I do know it’ll give us plenty to talk about in the meantime. Marauders #2 comes out swinging to stay on the roster, staying light and easy as some of the other books go fantastically dark places (did you read Fallen Angels #1?). But does it work?

Alright, we all saw it in #1 and we’re seeing it here in #2 — the artists are utterly unfamiliar with drawing and coloring Black characters. In a panel together, I don’t know that Gateway (Aboriginal Australian), Storm (Kenyan, Black American), and Bishop (Black American) should have the same skin tone as each other, and everyone else (HT to fellow X-Reviewer Chris for the observation). 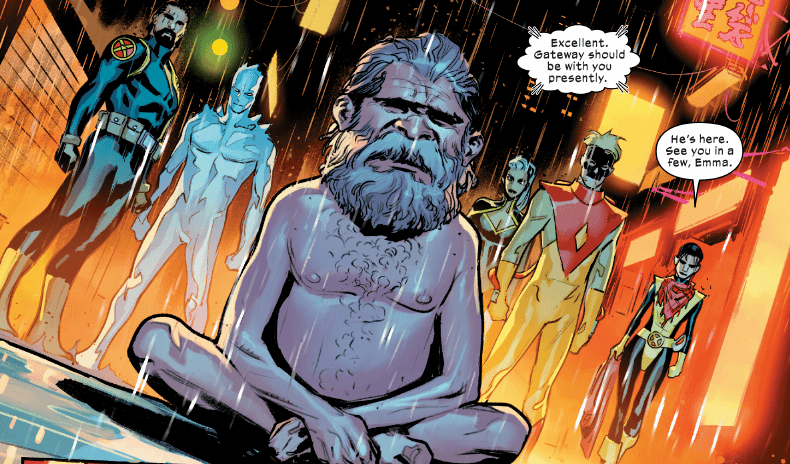 In one or two panels, Storm is brown-skinned. Elsewhere she fades between washed out white and pale with brown around her hair. Bishop’s hair shouldn’t look like he has pipecleaners glued to his bald scalp. These are the tightest cornrows in history. I’m not going to get all down in it, as so many others have already done so. Suffice it to say, despite some nice panels — the moment the crew finds out about the ending of X-Force #1 is fantastic — and the candy colors I love so well, this artistic team doesn’t have the range to do our heroes justice.

The majority of Marauders #2 is devoted to Emma Frost verbally beating the brakes off Sebastian Shaw. Shaw has been running a side hustle, shipping mutant drugs to the highest bidder. This despite his charter to smuggle the drugs only to non-treaty countries. Emma gets wind of this — she reads minds Shaw, how did you think she *wouldn’t* get wind of this? — and exercises her control over The Marauders and Kate to put an end to Shaw’s extra-curriculars. She also makes it clear to him that she’s choosing the Red Monarch, in fact, she already has. 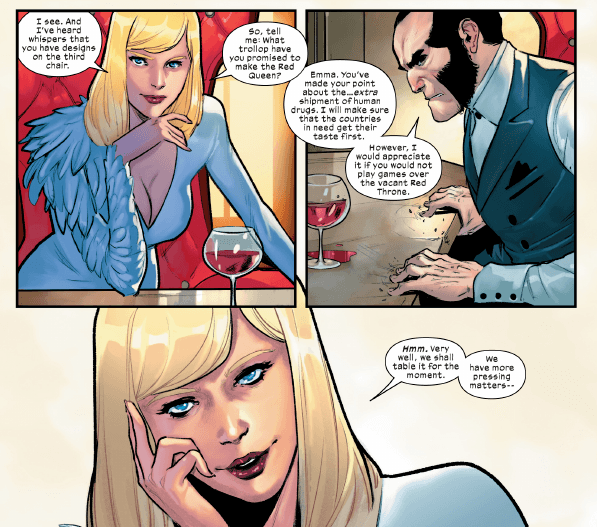 The Red Monarch is, of course, Kate. I’m not sure that’s a spoiler as I think we’d all guessed it way back in the middle of House of X. I have to give Kate credit, she owns the whole Pirate Queen aesthetic by the end of the issue in a way that I’m sure you’ll see cos-played at your favorite comic convention next summer. But at the same time that Kate embraces her new role, it is never explained why she does so. In two issues, what appears to be no more than 2 weeks time, Kate went from “I don’t know, Emma” to “I’m the Red Queen, bitch.” That’s a helluva character arc with almost no explanation. I’m here for it, I’d just like to know why. 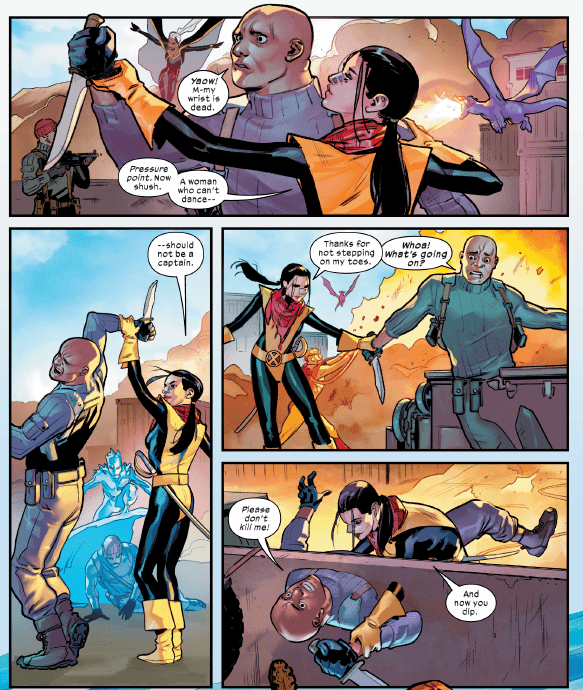 Meanwhile, Bishop, Iceman, Pyro, and Storm are along for the ride. There’s a moment when it looks like Bishop is going to stand up for his mission but that is quickly pushed aside. I’m currently not sure why the rest of them are on the crew at all.

To answer my own opening question: Does it work? Not really. There isn’t a lot of reasoning or character development to hang the action on in this issue. At some point, these pirates will need a deeper reason to do what they do beyond “Emma told me so” or “I’m with Kate” if this adventure is going to make the cut.

7 Tattoos out of 10
Reading Maraders? Find BNP’s other reviews of the series here.