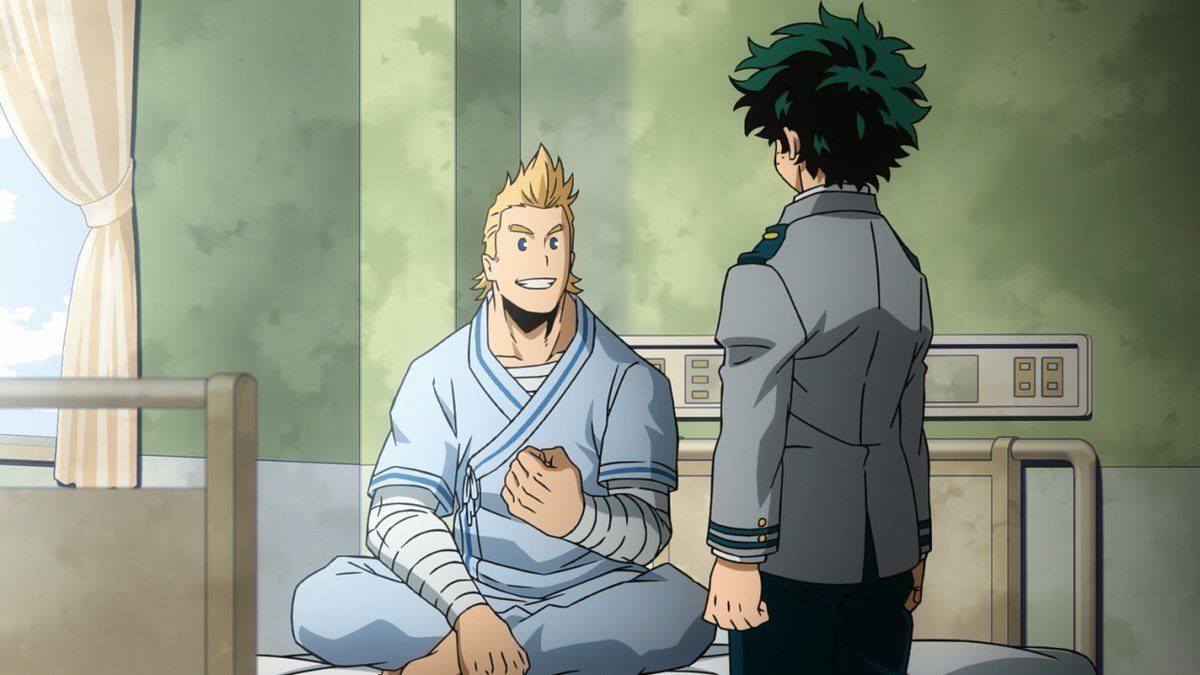 After Tomura and the evil crew faded Gaara’s cousin and finessed those quirk erasing bullets, they set their eyes on Overhaul who is all the way strapped down like a psychiatric patient in the 40s. Tomura relieves him of his quirk capabilities by giving him the Idle Hands/Evil Dead treatment. It was brutal, and amazing. They hit the Bad Boys slow-mo shot as they walk away from the wreckage and smoldering flames..

Next, we pop off with an unexpected Gran Torino opening as he and Hero PD go looking for Kurogiri who has been spotted in the forested region they’re headed to. They pull up on homie mad nonchalant as Grab Torino gets the jump on him, stopping dude from warping away. You know something isn’t right because Tomura Shigaraki’s right hand man is as cool as the other side of the pillow. Dude is fully confident his backup can hold it down, and boy was he right. Well, at least half right. Outta the thick if the forest comes the mufuckin armored Titan who starts wrecking errrrrything in his path. This cat is shattering mountains with his bare hands and leveling the Earth on sight! Later in the episode we find out that Gran Torino did in fact capture Warp Gate but not without heavy losses, including the fact that they lost this behemoth ass “walking disaster” Gigantomachia, who might’ve been the worse of the two evils on that day.

Back in the post Shie Hassaikai takedown hospital hood, Midoriya walks into Mirio’s room as this young stunna has fully adopted the Rock Lee workout plan is out here doing midair bicycle kicks in his hospital bed, just waiting to put his mentor’s words to good use. He shall not sulk; he shall not frown. He’s going to continue going through life, filling it with smiles, fun and laughter despite losing his quirk. He promises to to come back to UA as Lemillion who will save a million lives and I just cannot deal with the unbelievably optimistic attitude this young man has instilled in himself! Thug tears be drippin down my face, and I ain’t even got a second to wipe them shits cuz this scene is so dam beautiful.

Reflecting on how much of a badass he must be to lose his power and still be able to save Eri for as long as he did, Deku does what a superstar Shonen protagonist should do and offers to transfer One for All to Tagata Senpai. You already know he wasn’t gonna be with all that noise because he got plans y’all! He’s gonna ask Erin to rewind him back to the time his body possessed his quirk, and if that doesn’t work he’ll figure something else out. All the while, All Might is outside listening to Mirio’s resolve and his successor’s selflessness and walks away insanely impressed with these two top tier heroes to be.

Police pull up to the hospital and tell Deku and Red Riot to hop in like McLovin in Superbad. They drop the boys off at their dorm where they link with Asui and Uraraka. They reflect on their wild criminal organization takedown as they enter the room filled with all their friends and rivals. Everyone inside immediately starts buggin that “those guys” are back like national heroes! Everyone rushes to their side before Lido steps in as class rep and tells everyone to chill out because the homies done been through some real ass shit. Deku tells him it’s OK, and he immediately switches gears from wild professional to the MOST concerned friend. It was pretty adorable.

Meanwhile, it’s a Todoroki and Bakugo sighting! They let the rest of the class worry about these four and head to bed because of their license exam in the morning. We all know that actually means they’re feeling the jealousy inherit from the other Class A great heroes in training. On the flip side, them going to bed early allows everyone to knock out a little sooner than usual and reflect on how much their friends have achieved in such a short time period, as well as how much they want to accomplish one day.

Although this episode was devoid of action, save that brief Gran Torino scene, this was an excellent day in the life of high schoolers type of episode and the final moments promised so much more next week! As Todoroki and Bakugo get ready to FINALLY become licensed young heroes, they run into Camie, Inasa, and Seiji from Shiketsu High School and the competition heats up. Little do they know, the Heroes Public Safety Commission is watching from deep like Rita Repulsa and gets ready to spice up this exam!! Next time on My Hero Academia!