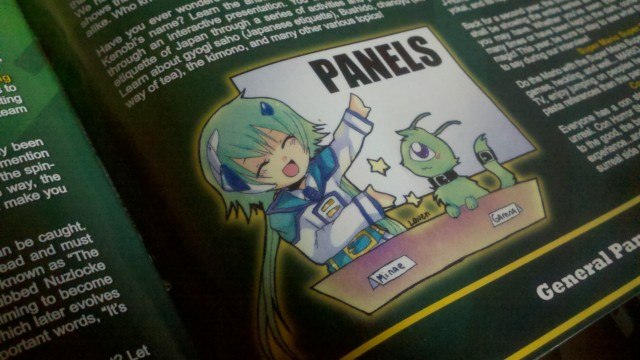 Spurred on by my previous comments about the Hugo Awards, I’ve been observing and participating in online conversations about diversity panels at conventions started by Annalee over at The Bias.com. The existence of the Hugo mess, and the resolution of it, have brought me to the conclusion that I see a number of other commenters coming to: that it is time to move beyond The Diversity Panel as a fixture of science fiction and fantasy conventions.

A lot of the politics of SFF happen at conventions, small and large, fan-run or corporate-sponsored. Conventions are the physical meeting spot where old and new ideas come into conflict and can be worked out face-to-face, not digitally. They are also mostly the domain of the Old Guard, and as such have serious trickle down effects through what is considered “legitimate” in the genre, regardless of the medium. Lastly, and most importantly, they are where a lot of fun can be had and where the concept of fandom as a community comes into reality. One of the core pillars of any convention is the panels. Panels are, nominally at least, what people pay their money to attend: talking sessions with knowledgeable people, or at least interesting ones.

I’ve attended a few conventions, and sat on many a panel. One of the current staples of convention programming is The Diversity Panel. This can take a few forms: Women in Science Fiction. African Americans in Science Fiction. Insert-marginalized-group-name-here in Science Fiction. They’re predictable and boring as all hell. While I address the “Black people in SFF” variety here specifically, as that’s where my experience is, some of these points may be extensible to other categories. The obligatory Diversity Panel is generally staffed with a variety of Black people, and one or two white people, tasked with discussing “diversity in science fiction/fantasy” in whatever way the convention managers see fit. These panels easily turn into bitch sessions, in which all of the audience members, basically all of the People of Color who are in attendance at the con, join the panelists in enumerating their most egregious experiences with racism in the fandom. Alternatively, and just as annoyingly, they become Diversity 101 classes, where the panelists spend an hour educating the White audience on why diversity in fandom is important and why they should try reading one book by a non-White author. This is great, the first time. After the fourth or fifth time, it is all exactly as fun as it sounds.

And really, aren’t we past this conversation? And if we aren’t, shouldn’t we be? Do we, as Black people in fandom, need to spend our time explaining the same old same ole when we really want to be out having drinks with our favorite author and hunting through the dealer’s hall for that collectible to complete our matched set? I go to a convention to have fun, not to relive my college intro class experiences. I, for one, intend to never participate in The Diversity Panel again.

Let’s be honest, these Diversity 101 panels aren’t FOR Black people, they are for White people ABOUT Black people. We remain the object discussed, not the subjective person leading the discussion. And it isn’t about Black people in a holistic, fan-centered way. It is about us in isolation, or in consideration with other PoC, but never in dialog with what we’re there to talk about: fan interests. It puts race before personhood and, in a subtle way, leads to the extension of the racist assumptions the panels are supposed to dispel — that there aren’t enough of us to warrant that our concerns be addressed in the rest of the panels; that discussing objects of Black nerd culture within the context of other panels would be unwelcome; that we don’t have anything else to say anyway. Whether or not we are past all of this on the nerd-by-nerd basis, I suggest it is time to act like we are. It is time to have programming that integrates *gasp* Black nerdom into the greater body of panels, not shuts us off in a room in the corner. It is time to stop treating diverse viewpoints as something that can be assuaged by a one-hour panel. And it is time to stop treating Black fans like we have to split ourselves in two: one side Black, the other side nerd.

I suggest a different assumption: that the majority of attendees at these panels are either PoC or allies who understand and accept the basic premise that diversity in the things we love makes them better, more interesting, more complicated, and more beautiful. That White people and Black people are there for the same reasons: nerd stuff, and we want to talk about those things together. And anyone who doesn’t agree can go to another panel. I promise, someone somewhere is discussing something else. I suggest we plan panels FOR US, filled with us and other fans. We want to know as much about Samuel Delany as we do about Isaac Asimov. We want to discuss Black Panther and Captain America as equal compatriots in our comic mythology with Superman and Cyborg. We want to be as well versed in Afrofuturism as we are in Classic Space Operas.

What’s a convention program director to do? They want to present and represent “diversity” in their audience. They’re hearts are in the right place, or not. As others have pointed out, sometimes The Diversity Panel is an excuse for the convention to avoid actually integrating their other panels. Well intentioned or not, the recent fuss at the Hugos really proves this point: we’re here, we’re not going any where. We and our allies vote for awards and read books and *gasp* write and publish them too! The “why is diversity important” is an answered question. So what’s next?

Beyond Black and White

There are plenty of other racial/ethnic/cultural minority fans out there producing speculative works centering on their experiences. Let’s bring those into the conversation and discuss our favorites. Let’s talk about how they are different and similar to other works and how they are influencing speculative fiction/fandom at large.

For a variety of reasons, Black authors may not self-identify as writers of science fiction or fantasy, but their content could definitely fit within the category. Hold an open-ended conversation with writers who don’t necessarily write “SFF”, discussing Afrofuturism, Magical Realism, Fabulist fiction, and other areas.

“Race” as Race in SF Movies

Are Klingons “Black?” What about Wookies? Are the Na’vis from Cameron’s Avatar Native American stand-ins? In what ways? A discussion of “aliens” and the ways they do, or don’t, represent and act out our modern struggles with race and colonialism.

Help for anyone wanting to put together a more diverse reading list. How to find authors of color, queer authors, etc. Discuss recommended websites and reviewers, how to win the Amazon recommends lottery, and more.

Shut out or frustrated by the slow pace of change in mainstream comics, creators from marginalized groups are turning to alternative means to make and distribute their comics. How do these work, how can a reader tap into them, and do they deliver the goods?

My suggestions center not just on Black fans, but on fans who live happily and fully in a multicultural world. These panels can and should be staffed by people with these interests, Black, White, or other. These are the the beginnings of conversations that can be continued into the hotel hallways and bars. I’m not worried about panels for “everyone”; we can and should stop baby-stepping the non-believers. I don’t need to change their fandom. I want to overrun it with mine.