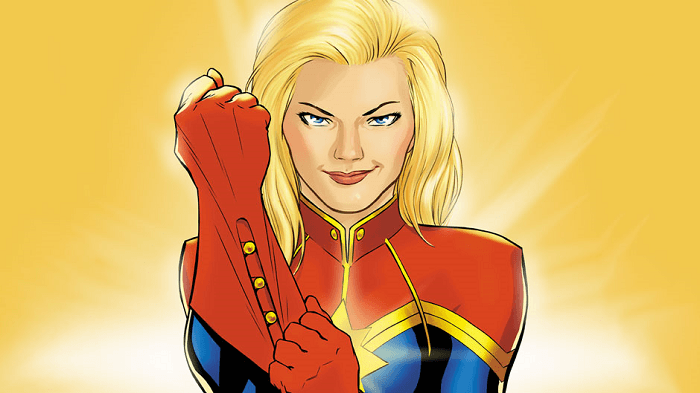 Well, we knew this was coming. The papers haven’t even completely rested on the ground from DC’s big movie release news a couple of weeks ago and Marvel sends the comic book nerdsphere into another hurricane. Announcing movies for new and familiar characters all the way through 2019, you know the crew had some thoughts about that.

Yes, yes, my people, you have heard correctly, we are in fact getting a Captain Marvel movie. Announced for July of 2018, this will fall about a year after DC’s Wonder Woman movie (and who knows what Sony will do with their supposed female led Spider-Man spinoff). Regardless, this isn’t an arms race for the first Woman-led superhero film anymore (as Marvel could’ve won that a while ago with a very absent Black Widow film…*cough*). Without the rights to Storm (Fox) and not pursuing a Natasha Ramanoff story, Marvel went to Earth’s Mightiest Hero, one Carol Danvers. Outside of possibly (big if) the Black Panther (which was also announced on the same day with a cheesin’ ass Chadwick Boseman), Captain Marvel fans (#CarolCorps for those that ain’t up on this) have been the most vocal for their favorite hero to hit the big screen in the Marvel Universe. And it makes all the sense in the world. Unique power set, Avengers member and often team leader, galactic traveler that frequently crosses paths with Marvel’s most recent success (Guardians of the Galaxy), this is a no-brainer. And yet, still a really big deal. Hard to know what storyline Carol’s solo film will follow (“Enemy Within” would be awesome), when she’ll make an appearance, who might make guest spots in the film (Rhodey aka War Machine, possibly?) or, holy shit who’s gonna play Carol Danvers??? There’s a lot of fancasting out there, like, ahem, this one…but the truth is there are a lot of really good actresses out there that could play her. There’s also some actresses out there that if they were cast for Carol Danvers, might compel me to walk blindfolded across an L.A. Freeway. And its not that I have anything personally against Katherine Heigl or Cameron Diaz… Wait, who mentioned Katherine Heigl or Cameron Diaz??? …Anyways, it’s a long wait, but it automatically became one of my top five comic book movies I’m looking forward to (of the 83 that are set to come out until my toddler goes off to college). But hey, at least it will be easier for find some Carol Danvers gear now, right? And now, some instant reaction from Captain Marvel’s most recognized writer, badass Kelly Sue DeConnick:

In other words, I think we could all be pretty excited today.