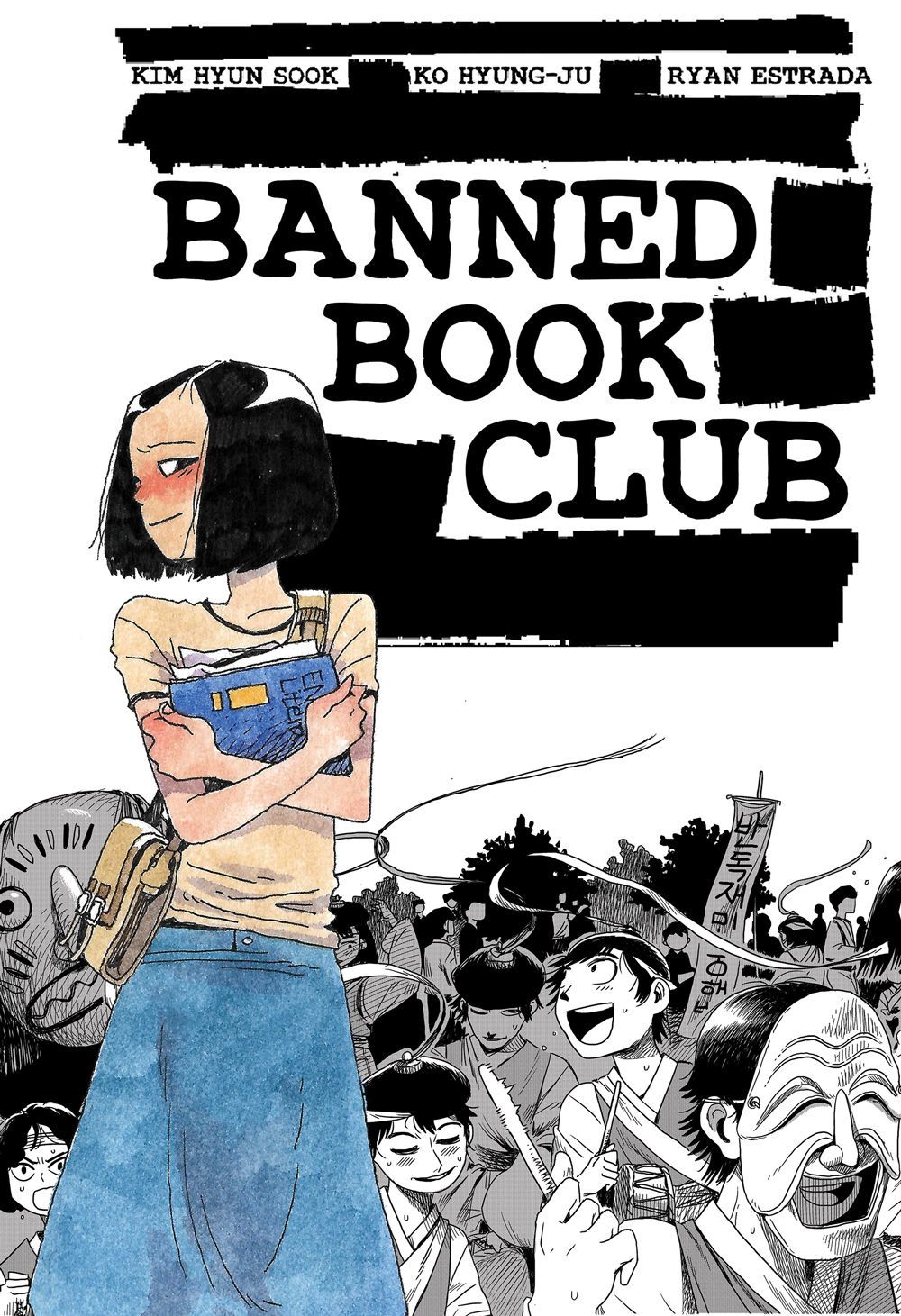 Banned Book Club from Iron Circus Comics caught my eye from the beginning. I love reading about places I’ve never been, about historical events involving folks people who don’t look like me, speak the same language as me or worship the same way I do. I love comics from the Asian diaspora, especially manwha. Banned Book Club presents the true story of a South Korean woman’s student days in college in the early 1980s. Under an authoritarian regime she found — through the rebellion of reading — her purpose and learned how powerful a tool censorship can be.

Banned Book Club opens on Kim Hyun Sook who starts college in South Korea back in 1983. She’s a headstrong young woman who constantly butts heads with her much more traditional mother, who isn’t even fully onboard with her daughter going to college. But Kim is a determined girl who is ready for her life to change and for her world to start to open up. College will the be catalyst for that and she’s been ready. For two years, while working at her family’s restaurant, she saved up her own money working another job and applied for school in secret to make it happen.

With a love of reading in her heart, she leaves home and jumps on a bus to her university to study Western Literature…she’s ready to be the captain of her own ship. The first steps off the bus, she finds herself smack in the middle of a student protest. The protest outside the university’s gates is complete with Molotov cocktails, riot gear clad authorities, and folks being arrested.

Kim Hyun Sook figured that college was a battlefield — intellectually — of ideas! She had no idea that her new college campus would be one literally with life-or-death stakes.

The artist, Ko Hyung-Ju, illustrates the adventures of Kim Hyun Sook and her ragtag band of friends effortlessly. Banned Book Club visually shines with a stark, black and white color scheme. What comes across the best are the emotions. We see nervous smiles on faces of girls entering bookstores looking for forbidden, banned books, the look of fear echoed in someone’s eyes when a government authority turns their sly grin their way in an interrogation room.

The fast pacing of the book is enhanced by Hyung-Ju’s art with big, bold action sequences. Grittiness and softness both have their place in this narrative across the pages. That Ko Hyung-Ju? He has THE RANGE. I’ve always loved manwha, often placed second to Japanese Manga for years. This is a great representation of it to share with someone who is looking to get a start in reading it. 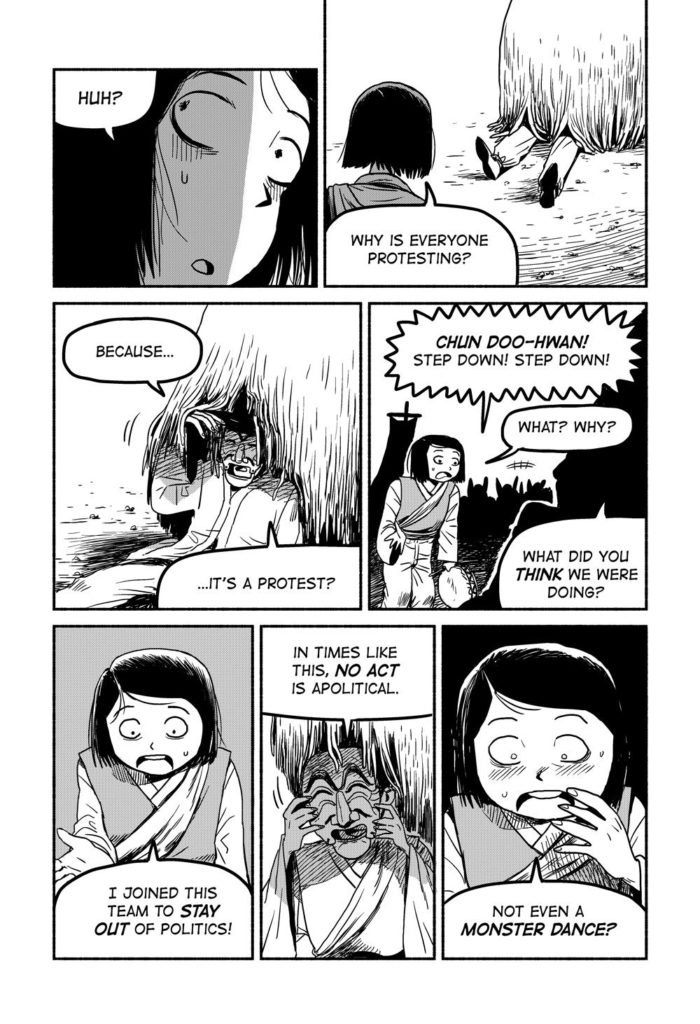 There is this wonderful thread in the narrative on art, on literature and the political nature of it all. My friends, let me assure you it is one of the best turning points for both Kim Hyun Sook and the reader. Our girl just wants to exist, and moreso try her hand at making a life for herself. We can’t fault her. So she reads her assignments, goes to her classes, joins a club, and tries to keep up. Yet at every turn, she is hella surprised when she is confronted with the fact that nothing is apolitical — from the tried and true plays of William Shakespeare to more traditional Korean art forms like the stories connected to Korean mask dances. It is a startling turning point for Kim Hyun Sook and a brilliant reminder for the reader as we can all turn a critical eye to all the media we consume now. From fairy tales and folklore from days of old to AAA video games we buy and heatedly discuss and debate on the internet.

I understand why it was important to tie authority figures into this story as well: the dangers they bring when they wield too much power, induce too much fear-mongering and division among people. This too is a timely and uncomfortable reminder for these times when intellect is thrown to the wind and political division is demonstrated so much in the clampdown on the press. From the perspective of these brave students and their underground book club of rebellion, this is stressed in degrees. There are parents who willingly kick out a fellow club member when the government authorities visit her family home (to inform them of her activities as a protester). Teachers who are tasked swith being guiding lights for their eager, impressionable students, and don’t succeed. There is a government that is willing to mow down insurrection at any level, even hurting young people barely older than children, exposing them to the darkest and most wicked faces of humankind.

I really appreciate the tag team work Kim Hyun Sook and Ryan Estrada did in taking the stories from this time period and crafting it to this format. This becomes a story that is easy to follow and hits all the right notes. I appreciate the cultural nods to life for a teenager during this time in South Korea. The banned book club members all add to the discussion on what it means to be a loyal countryman or woman. Each of them provides perspective on how to bend over or resist under the tyranny of their corrupt government. There are some interesting confrontations when fellow students disagree with the protesters and rabble-rousers that add to the plot as well.

This extends to what it means to be a good Korean son or daughter in Kim’s case, a point that is expressed so well with the extremes of her parents. Her traditional mother originally did not support allowing her daughter a college education and her aloof and admiring father who doesn’t stand in her way. While I believe this part could be universal to nearly any reader who picks up this book, as each generation sets themselves apart from their parents, I can only assume that this will hit differently for those of Korean descent as this history is still fresh. 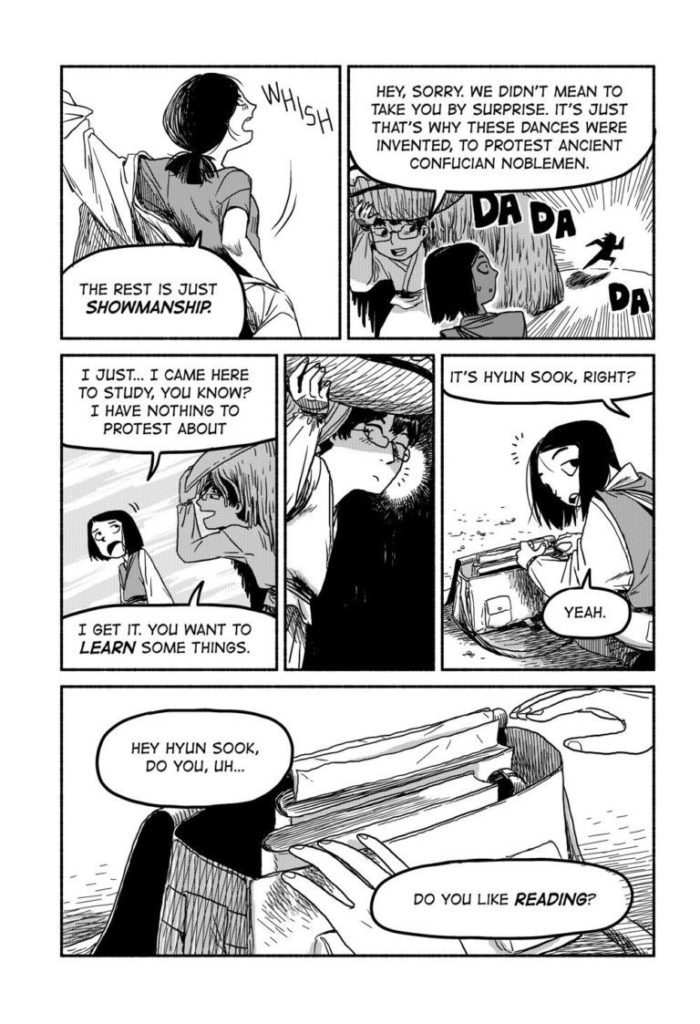 The creative team nails it with Banned Book Club. It is satisfying to read and reread this narrative of becoming your own person, with conviction, refusing to go back once your eyes have been opened. When I think about the movements started by and fleshed out with young people — like the movements that helped birth Ruby Bridges, The Little Rock Nine, The Freedom Riders, and the Chicano Students of the east L.A. School Walkouts — it all seems so big.

I have to center myself and remember that every movement, every cluster of like-minded folks, every crowd of protesters starts somewhere, starts small, starts in a classroom, starts in an unused storage room, in a church or in a bookstore. Young people have created and led so many measures to right wrongs and fight against the injustices of their days.

Narratives about rebelling young people who are not the default Caucasian or American are needed. These stories outside of America are so important and worthy of our attention and our admiration. Narratives about persons of color who get centered in their own stories for their own selves and their hopes for the future are necessary. Narratives about girls and women in student movements who get to be fully fleshed out individuals and not just love interests, secretaries or pushed to forgotten corners are valid and always worth a read.

As a graphic novel, Banned Book Club is the daring memoir that comes once a generation. There is nothing else like this on the bookshelves. This is a book with a message that is as eerily timely and necessary as the atmosphere present on the pages–feels a lot like the world today in fact.

As a learning tool, Banned Book Club is a genuine look into the lives of those young people who wanted more not just for themselves but for their country. Optimism colors the pages even when the plot reveals the worst for this brave crew of young adults and their comrades.

As a love letter to those times, Banned Book Club is an ode to the rebellion of reading and how change must be worked for continually, never having an ending, always present.

It's official!
Banned Book Club will have simultaneous release in both English and Korean!

Both versions will be out on May 19th, the 40th anniversary of the Gwangju Uprising, a huge moment in the fight for Democracy in Korea that played a big part in the story the book tells. pic.twitter.com/0ntSK5PIPr

Kim Hyun Sook was born in Changwon, South Korea. She became a member of a banned book club in the 1980s while studying English Language and Literature. This is her first book. She has co-written comics for websites including The Niband, Oh Joy Sex Toy, and she translated Lady Rainicorn’s dialogue for Adventure Time comics. She now runs a new banned book club in Busan, where she lives with her husband, Ryan, and her cat, Dog Baby.

Ryan Estrada is the author of POORCRAFT: WISH YOU WERE HERE, Learn to Read Korean in 15 Minutes, Ryan Made Mistakes, and many other comics. He started submitting his work to newspapers when he was six years old, and one of those newspapers finally hired him when he was 16. He has had many adventures around the world since, but the best thing he ever did was marry Kim Hyun Sook.

Ko Hyung-Ju was born in 1996. He has drawn comics since elementary school. His first published comic premiered on Lehzin Comics in 2016, and he is part of the group SIS Comics. He now studies art at Cheongang Cultural University. He will draw until he dies.

See more of Iron Circus Comics and their books on their site, Ironcircus.com .

See our other reviews of Iron Circus Comics books here.