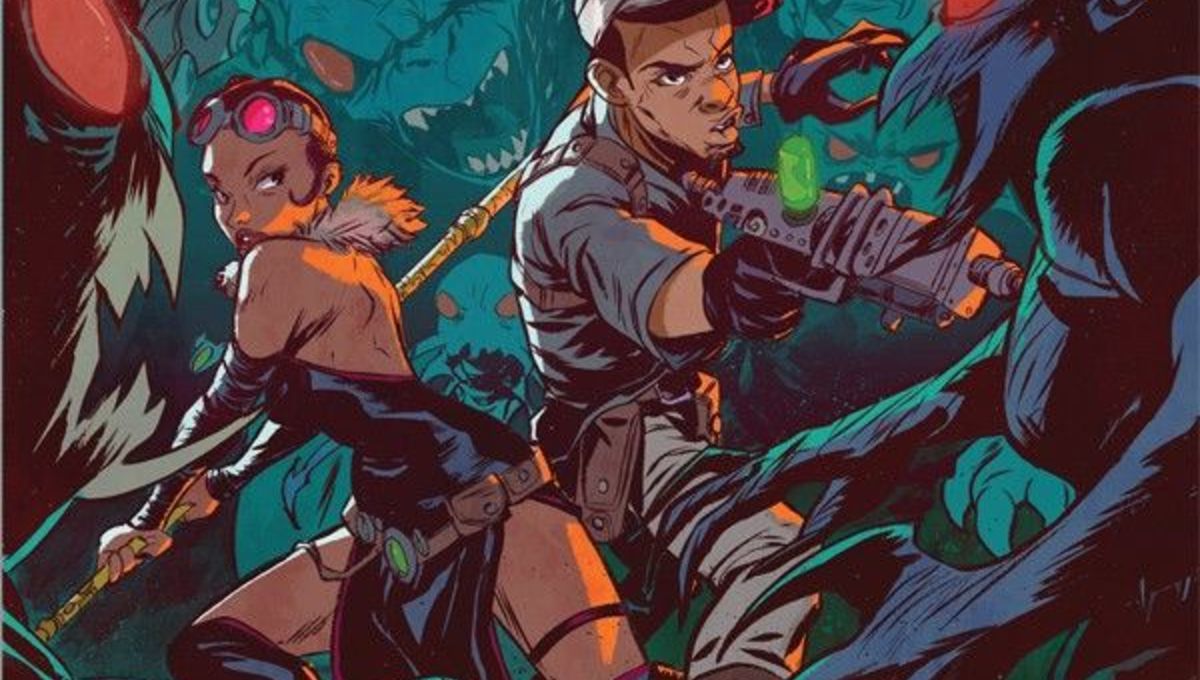 In the second of three interviews leading up to the much-anticipated release of Bitter Root, Black Nerd Problems interviewed co-writer Chuck Brown. Chuck’s a veteran of the self-publishing and indie comics scene. And he’s also a frequent collaborator with Bitter Root artist Sanford Greene. They’ve worked together on Rotten Apple for Dark Horse, and 1000, which is currently on Line Webtoon.

Black Nerd Problems: Creators usually build off of one central idea that’s the foundation of their story. Usually, it’s an image or a scene. Maybe a character. Which was it for you?

Chuck: Honestly, it was a barber’s chair with bloody rags on it. I know that sounds strange, but that’s the first thing that popped into my head. It started off as barbershop talk. And it was like a barber that would set bones and do minor surgery in the 20’s and things like that. And I thought to myself that would be a cool cover for something. It kind of spun off into monster hunting and then the Harlem Renaissance was during that time so it kinda just snowballed into more and more things. And the main villain, he was the victim of a lot of hate crimes. It just kept snowballing. I told all this to Sanford and he just fell in love with it. He asked for some character profiles. And I was like okay, fine I’ll get it to you whenever. Then a couple days went by and he was like hey, where are those character profiles? I was like okay is he actually going to do something with this thing? So, I sent it to him and before I knew it he had all these amazing designs for these characters.

BNP: On that note, who’s been your favorite character to develop so far?

Chuck: It’s probably gonna be Cullen. He’s one of the younger characters. He’s trying to find his way into the world. He’s okay at what he does, but he’s still trying to find his way and get a grasp on things. He’s still trying to gain the respect of his peers and things of that sort. And I relate to that character a lot. When it comes to my role here in the comic book industry—I mean I’m in it, but I’m still trying to get recognition and get my foot-holding and kind of get my career revved up in a sense. And Cullen’s been struggling with that as well.

BNP: Would you say you were more eager or nervous about this book finally coming out?

BNP:  Bitter Root started with you, right? Before David Walker came aboard?

BNP: Before David, had you ever co-wrote something before? Or is this the first time?

Chuck: A long time ago I co-wrote something at Zenescope Comics called Hercules Payne. And I co-wrote it with Pat Shand. That was my first time co-writing.

BNP: What makes co-writing something different?

Chuck: You gotta have a really good vibe. When you’re in the driver’s seat, you’re in the driver’s seat, you know? You make the right turns, you make the left turns. And with co-writing you have a navigator as you drive. And while you’re on this road trip, you sometimes switch seats. Sometimes they’re driving and you’re the navigator. Sometimes you switch back and forth. And you get a feel for each other as you work with each other. It’s very interesting. Being able to vibe with the artist is cool as you come up with ideas. But I’d never really experienced that with another writer before like I have with David. At Zenescope, Pat was more in the driver’s seat. He was more of an editor and a co-writer. But with Bitter Root, it’s more of a collaborative effort. Sometimes I’m reading through the scripts and I forget who came up with what. There are some ideas where I’m like I don’t know if it was David or it was me. Or even something Sanford might have said. We gel really well.

BNP: What specifically about your story has changed since that initial image of the bloody rags on the barber’s chair?

Chuck: A lot has changed. These creatures that we have, the Jinoo. They turn into these creatures based off of hate. And that wasn’t in the original idea. It was just creatures that this family hunted during the Renaissance. The three main characters—the cousins— Blink, Ford, and Cullen— David has really developed Blink a lot. He fell in love with that character. He brought her more to the forefront of the story, which I thought was really great. It’s evolved a great deal. At its core it’s a family of monster hunters during the Harlem Renaissance. And it kind of grew into so much more than that. 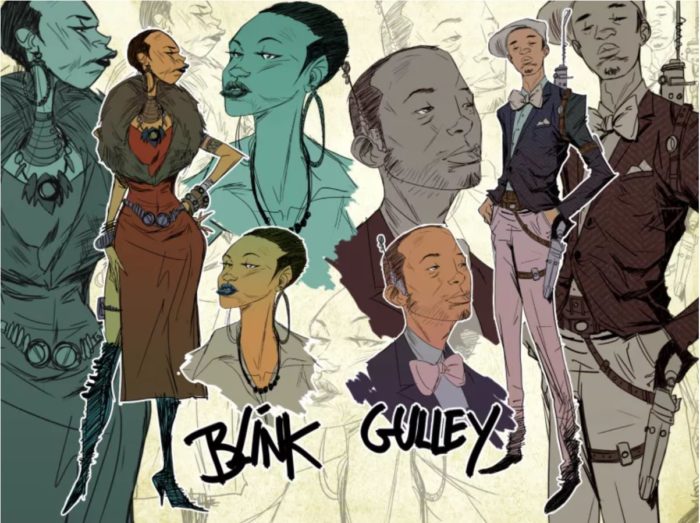 BNP: Bitter Root is such a striking title. I’ve always thought it was really intriguing, as it has a lot of weight behind it. Which one of you came up with the idea, or was it a collaborative effort?

Chuck: Well we had one title originally—it was called Bloodbornes. That was the title that I had. It was kind of a play on words on blood born pathogen. And it was gonna focus more on the medical side of the disease of these monsters. But there was a video game out with that title. I thought nah it’ll be alright. But then I started looking at the video game, and I was like man it’s even spelled the same way so I was like forget it. It was so messed up because I had that title for like 2 years, man. That game blew up.

BNP: But the good thing about being creative is you’re never short of good ideas. And I think at the end of the day, Bitter Root wound up being the better title.

Chuck: People do like it. So, it was just me and Sanford when we had to come up with a new name. He was like we need a new name. So, I just texted him like a huge list of stuff. And Bitter was on one list, and Root was on the other. He was like “I like Bitter Root.” So, I was like I guess we’re going with that then. Well, we actually thought about it for a little while. I was like why Bitter Root? And he was like, well it’s in the bible here and there. So, I kind of built the story around that a little bit. But really it was a brainstorm of a bunch of words. He picked two of those words, it kind of worked out, and the title has several different meanings. The bitter root that’s inside of us. The bitter root of this evil and hate that’s spreading through the world and this city. And the bitter root is also part of the cure. It’s part of the plant that they use to cure these monsters.

BNP: What’s been the most difficult aspect of working on this book?

Chuck: I’ve done stuff for Marvel and Dark Horse, IDW. Things of that sort. But with Image, it’s kind of all you. The finances are all you. I’ve worked with Sanford for years and years. But now it’s like directly working with him. You know what I mean? You don’t have that buffer of the corporation behind you. I’ve self-published for several years but not on this scale. Dealing with the day to day business side of things. The marketing is all you. Setting up the signings is all you. All that kind of stuff.

BNP: I can see how that’s a relief and stressful at the same time.

Chuck: Yeah, and on the same note, you can do whatever you want. You can choose who you want on the variant covers. The content is totally up to you. No one’s telling you what to do. So, there’s good and bad sides of it.

BNP: What about writing this story has inspired you in life?

Chuck: I’ve always been somewhat of a history buff in a sense. But researching for this book really made me dig deeper into history and African American history and all the different twists and turns and hardships that happened. Like The Cotton Club. For years I thought it was a place where black people came and celebrated and was a place where music flourished. But of course, that’s not the case at all. It was a place for white patrons to come and enjoy the music and we weren’t even allowed in but we played the music. Things like that.

BNP: What have you learned about yourself while working on this book? What has this book changed about you?

Chuck: It’s opened my eyes a lot more about the industry itself. A lot of the behind the scenes of the industry. And not just the comic book industry but other industries as well. The people that approach you once a property like this gets out to the world and people find interest in it—just Hollywood and things of that sort.

BNP: What do you hope the audience gets out of this story?

Chuck: I hope they learn something about the world as a whole and learn something about themselves. Hopefully open their eyes to current events and the hatred around us. Like someone that wouldn’t normally be in my circles—I want those types of people to get their hands on this book. Someone with different political views than I have, someone with a different background, but is still able to see the message we’re trying to send to the world, and maybe have their minds and hearts changed about some things. That would be awesome.

Interested in more behind the scene information on Bitter Root? Check out the first interview with Sanford Greene here.