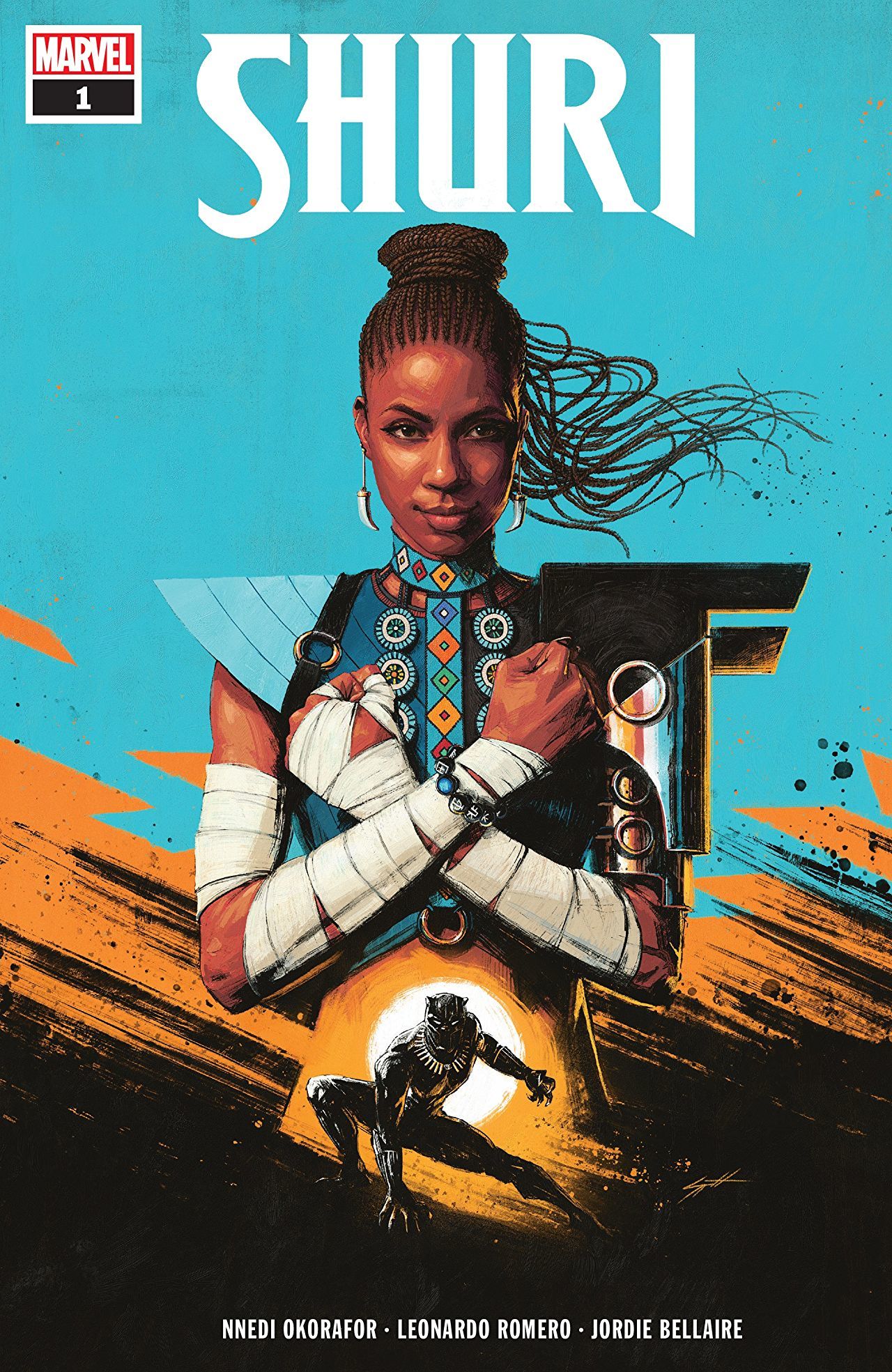 Wakanda Oil Do I Need To Un-snatch My Edges?

We just started, but I see that Nnedi Okorafor is in the edge-snatching business. Shuri #1 dropped and it’s already sprinkling Black girl magic on the universe. I was waiting for this and at first I was iffy. We loved Letitia Wright’s take on Shuri in the major motion picture. Okorafor mentioned that this would be a merger between Letitia’s take as well as previous versions. Lo and behold the comic presented itself with no less vigor and no less wit than the Shuri we’ve grown to love.

Wakanda Double Standard Is This?

One of the first things readers should pay attention to is the presentation of our protagonist. Okorafor addresses what we have always noticed about womanhood. How it is seen as a “support system” but not the head in charge. When folks need us, we are there. When the world is without their “masculine energy” folks turn to the femmes that were behind those energies. What I love about Shuri #1 is that it highlights the power of womanhood and what it continues to bring to the table. You might have T’Challa but we’ve also got a femme with vibranium running through her veins fam. 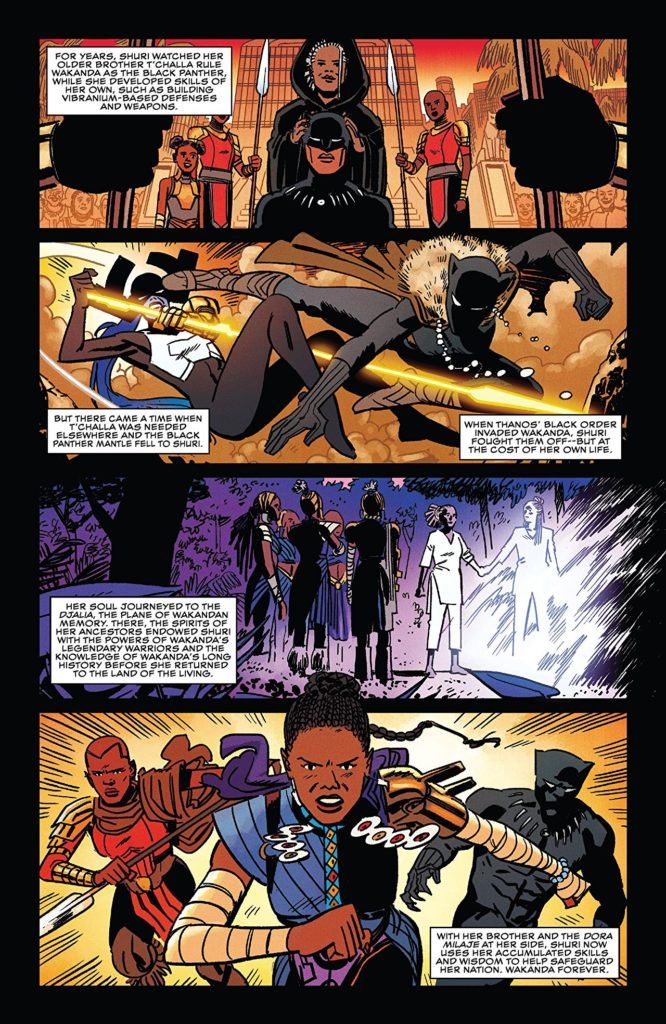 Another aspect to appreciate is the conversation about ageism. “Youth” comes with the stigma of folks feeling like they need to baby-feed you. No matter how many capabilities one may prove to have, when you’re the youngest you run the risk of being downplayed because “the elders are built to lead” even if you’re more qualified. The team approaches various walls that block Shuri from being seen as the GOAT that she really is. I’m ready to see what other aspects will be released. Not only about her character but the capabilities that she will take advantage of in the Panther suit.

Wait, Wakanda Art Style Is This?

Honestly, during the first two pages I had no idea what was going on. I was wondering why Romero and the team chose to go down this route — then I stopped on the third page and backed up. Hold on my guy, is this a homage to hieroglyphs?! After my brain exploded, I appreciated everything three times more. Usually I’m on the iffy side of boxy textures included with text but this just flipped everything upside down. Granted context is a great vehicle towards artistic development but I did not see this coming. Having an art style that looks similar to the style of hieroglyphs brings in this appreciation of the ancestors that been in the game since before the game was created. Leonardo’s precise cuts with faces, shapes and the flushing of colors helped me merge the other topics presented in this comic. 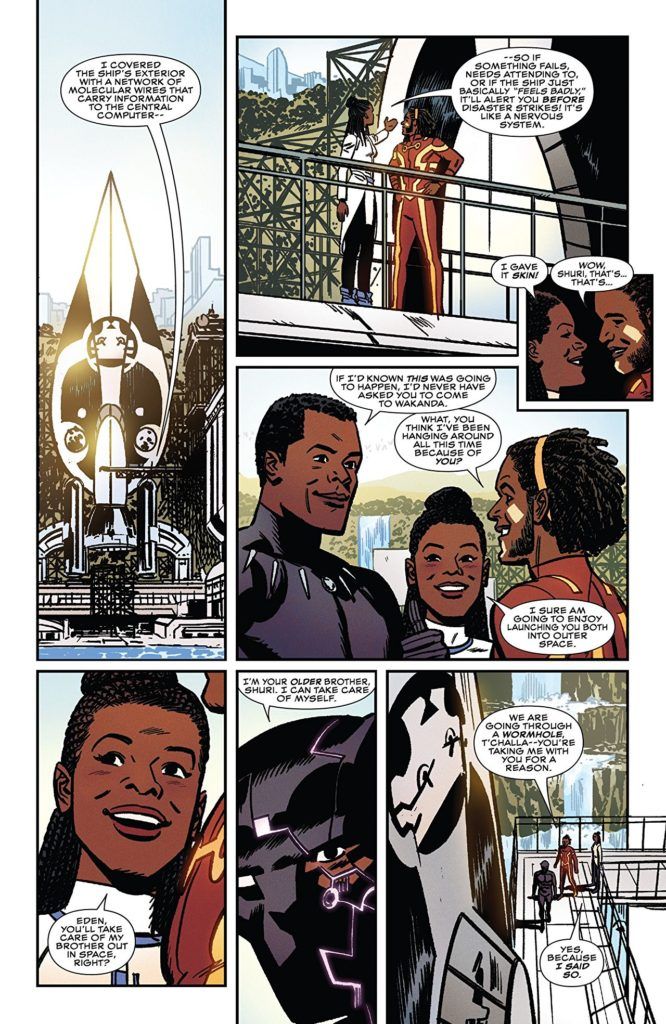 The ironic duality between an art form that travels back centuries and bringing forth the young woman who needs to step up to the plate is beautiful. Shuri’s intelligence highlighted with an art style that pays homage to hieroglyphs spotlights an important mark in storytelling. Romero’s “comic take” on the artistic style used to tell African folklore and history is a clever way to introduce the young inventor’s place in the future.

What I hope to see more of in future issues is the relationship Shuri has with her inventions. We all hear about vibranium’s flexibility but it almost feels like a Krabby Patty secret formula. We know what it is capable of but exactly what is happening? A great insight for future readers to have is to understand the limitations that Shuri faces in the creation of said inventions. Granted this super genius grew and will continue to grow, but with new ideas come walls. Not only will this introduction help us better understand the barriers our Black Panther faced to get here, but what she will continue to face as time goes on.

Reading title of comic? Find BNP’s other reviews of the series here