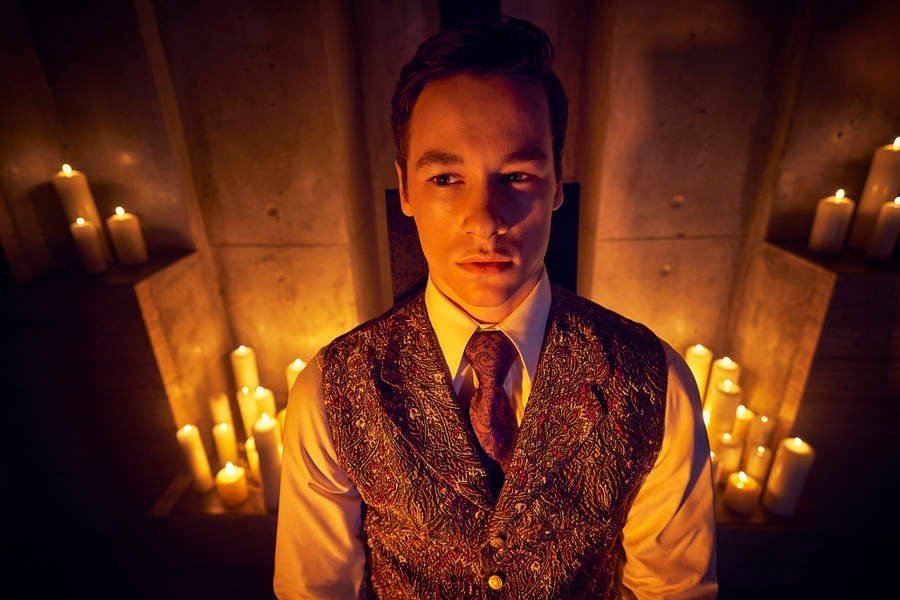 So, quick recap of last episode. The world has gone to shit, and the Antichrist is here!

We open with Smart Sis Emily taking off her purple gown, the lights flicker, and the door to her armoire opens on its own. AND BASTDAMN IT’S FULL OF SNAKES! I immediately start itching and searching around my living room for movement. Snakes are my #2 fear, so this scene unsettled me all kinds of ways. But Miriam comes in and starts chopping them up talking about fresh meat, so you know what’s for dinner next.

They bring the snakes out prepared like some chicken noodle soup, no soda on the side. But when they open the lids on them bowls, them demon spawns of the Son of Satan slither right on out like they just wasn’t in pieces. But I guess this is a gift of our guest who has taken over Ms. Venable’s office.

I’m like Indiana Jones here. Snakes. Why’d it have to be snakes? With all the sarcasm of your judgmental aunties… Great way to start an episode.

The Devil’s in the Details

We return with Smart Sis Emily worried about who is in Ms. Venable’s office. (It’s the Devil, baby. You don’t want to know him.) Michael finally comes out and introduces himself, telling them why he has come and how he will choose who goes with him to the Sanctuary. (Yeah…no…I’m not here for the Devil.)

So, interviews begin, and Mr. Gallant goes first. Revealing his life story to Michael, who is basically manipulating him to tell his secrets. From here, we are treated to Mr. Gallant’s backstory. He begins to hit on Michael, who teases him before sending him on his way with no Satan sausage.

Elsewhere in the outpost, Smart Sis Emily and Timothy are having their weekly kiss, and Smart Sis Emily is fed up! She wants the D, and she is ready to go. (Everyone is hot and bothered in this mug.) She tries to convince Timothy to leave with her, so they decide to break into Michael’s room and see if they can figure out how to get to the Sanctuary he came from and get help.

Back to Mr. Gallant’s room — a knock on the door and we are greeted by the Rubber Man, dressed similar to Evan Peter’s character in Murder House (another call back obviously). This leads to some intense rough housing, and GDGE walks in on her grandson getting his backdoor knocked all the way down. ALL. THE. WAY. DOWN. (So, it’s basically Evan Peters’ character getting it from Evan Peter’s character 😀 .) Here’s the kicker! GDGE went and sang to Miriam like she part of the Harlem Boys Choir. The GD wants to live. She trying to survive see another (shitty) day. 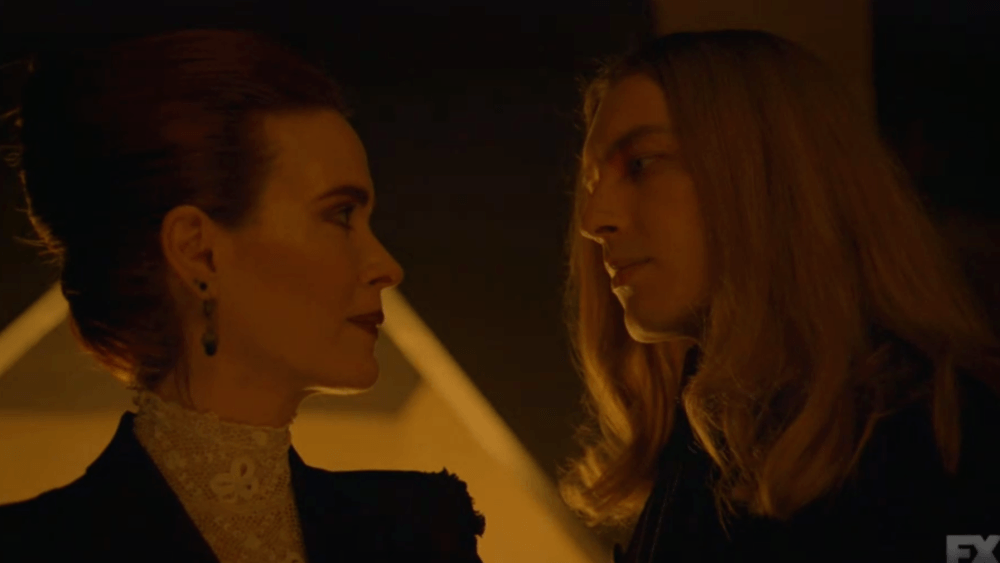 Smart Sis Emily and Timothy sneak into Michael’s room. They find out that all of Wilhemina’s rules are bull and not part of The Cooperative protocol. Then, hanging out above them is the Rubber Man.

Michael has gone to confront, or better yet, harass Wilhemina. It is during this exchange that he reveals that he knows that she’s been lying about the rules, namely having sex. Looks like in the apocalypse “booty is more important than food.” So sayth the Booty Warrior Fleece Johnson. The conversation is also revealing of Wilhemina’s character as she speaks of the other people in the outpost, most importantly of her feelings towards men.

It is also here that we get a glimpse at Wilhemina’s vulnerability when Michael forces her to allow him to open the back of her dress. Once in view, we see that her back is more crooked than the S on Superman’s chest, thus why she walks with a cane. I thought for a second he was about to perform a miracle and heal her but instead he just spites her.

With tears in her eyes, she asked Michael if she had passed his test, and like the villain we know he will be, he gives her a sassy “no” right into her face. This reaction and the fact that she feels ashamed of her body are clear reasons why no one can have sex. But look, just cuz you collecting spider webs don’t mean everyone else has to as well. Good day, madame.

Miriam saves her from further shame and tells her about Mr. Gallant. They are both in agreement that Michael and Mr. Gallant are working together and have known each other before the blast. So, they take him down to another chamber, chain him up, and whip him like a…nope…nope…I’m not touching that one. Either way, instead of being a punishment, Mr. Gallant is enjoying every minute of it. 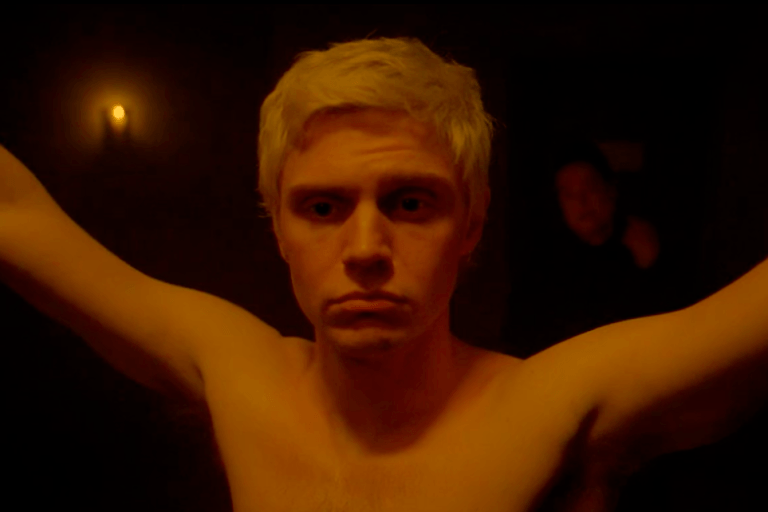 In some straight stir the pot pettiness type of shit, Michael enters the chamber after Miriam and Wilhemina leave and tells Mr. Gallant in so many words that he would never fuck him because he ain’t shit, and that GDGE hates him and told on him. In a moment of magic, Michael releases Mr. Gallant’s chains, but he just thinks they came loose.

Upstairs, it’s Coco and Mallory vs. GDGE and Dinah-Oprah, arguing about if the world was better during the further past or more recent present. They argue dog breeds, coffee choices, vast channel selection, and more than two sexual orientations, which is ironic considering *enter stage left* Mr. Gallant.

Pissed off Mr. Gallant comes for his Nana, but just like some good Dynasty shade, she reads him for filth, pats him on the face, and sashays away. Regal all the way.

Upstairs, Smart Sis Emily and Timothy are over Wilhemina’s (confirmed) made up rules and say “fuck it” and do just that. Smart Sis Emily gets her that D…while the Rubber Man watches from the shadows. 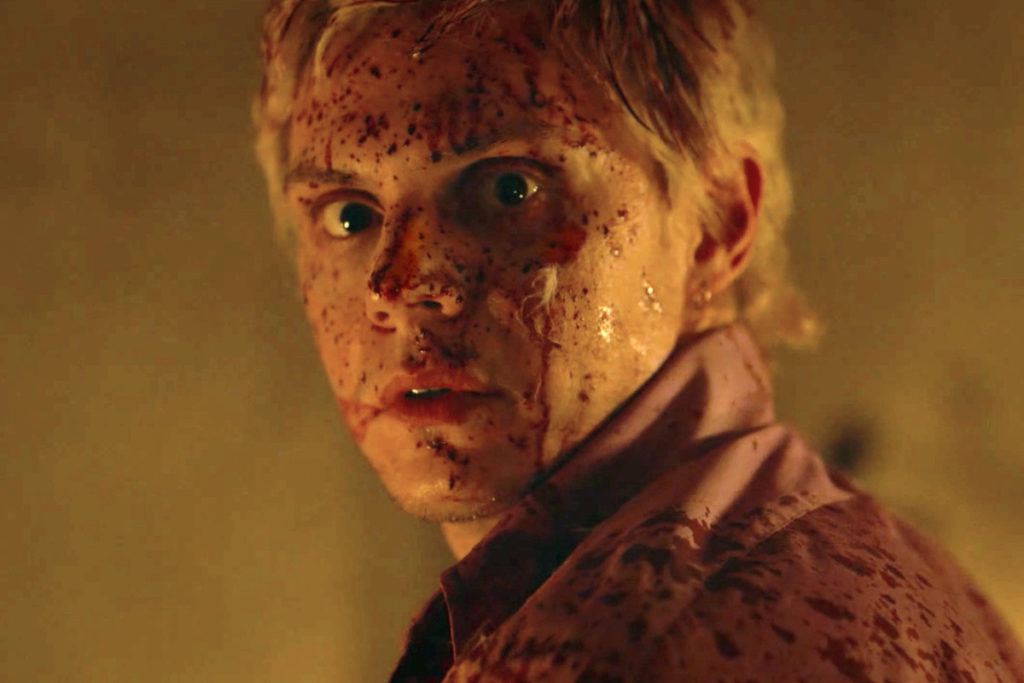 We return to find Mr. Gallant sulking, but he perks up when the Rubber Man appears. He follows him to a room upstairs and tries to remove his mask, still believing it’s Michael. When he can’t get the mask off, he pushes the Rubber Man onto the bed, but he still feels jaded about being called out. He reaches for a pretty pair of scissors on a nightstand and stabs the Rubber Man repeatedly in the stomach.

The door opens behind him, and there stands Michael. Mr. Gallant’s shocked faced is covered in blood from the person he just stabbed, and when we turn around to see just who it is…but of course, it’s his Nana, GDGE. Looking royal even in death. Well, since I won’t be saying her name anymore, let me pour out some burnt champagne for Grand Dame Grandmama Evie.

During this time, Miriam and another tall henchwoman that we’ve seen, bust into Timothy’s room as he and Smart Sis Emily are sleeping. Tall henchwoman goes straight to pulling Smart Sis Emily by her hair. Ma’am, how dare you pull her by her hair. You never touch a Black woman’s hair, especially hair still this laid during the apocalypse when there are no hair care products for anyone yet alone a Sister.

Timothy tries to fight back, but is knocked down by Ursula the Enforcer, and they are both taken to Wilhemina who sentences them to death. That petty, dry vajayjay will get you no where. But she must keep order, because Timothy and Smart Sis Emily are challenging her authority and tell her they know all her rules are made up lies.

They are forced into the same room we saw last week, where boy toy Stu got popped, and it looks like they are about it get it too. However, Timothy overpowers one guard, takes his gun, and shoots Miriam before Ursula the Enforcer gets control of him and knocks him out.

Our final scene exposes another very important secret: Miriam is a robot/android. The bullet went into her “body” and wires and tubes are coming out of the hole and some white, foamy fluid. The look on Miriam’s face is pure terror and sadness and fear. Her face is almost comically looking as though it is melting; it’s so downturned. She is scared…of people finding out… Does Wilhemina know? Anyone know? I guess we’ll see.

I have been lied to, and I’m not happy about it! The preview showed the coming of my witches in this episode, but I should have expected that it was just a teaser for them coming in at some point. I know that Ryan Murphy said that episode 5 would have a big twist, and I’m hoping that it wasn’t that it would be the episode where the Supreme will be bringing her Coven to wreck shop.

I’m tired of the Antichrist being my only fix for magic on here right now, especially when I KNOW that witches exist in this world.

Also, I have to go with that the Rubber Man isn’t Evan Peter’s character, Tate, in the suit like in Murder House. That would mean that Michael would be able to make ghost follow him, and supersede the whole you die here, you stay here thing about Murder House (and later Hotel). Instead, Rubber Man has to be an extension of what Michael could see as Mr. Gallant’s ultimate fantasy. Now, why Rubber Man was perving on Smart Sis Emily and Timothy isn’t clear to me at this time, but it was a creation of the Son of Satan, so it can do what it wants.

I’m seeing comments about people loving the show so far and loving certain characters/actors. I like Smart Sis Emily, and Timothy even gained brownie points for standing up for her and fighting. (Though, the Adam and Eve connection is becoming more apparent.) Besides them, everyone else isn’t really catching me like that.

Next week is their Halloween episode. Feels weird not being on or close to actual Halloween, but it looks to be a bit of frightful fun, and the Halloween episode is usually a very good episode. So, here hoping…for witches! 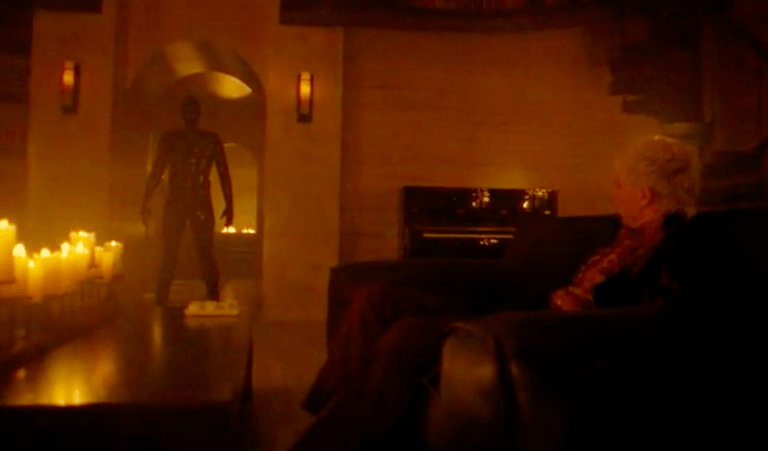