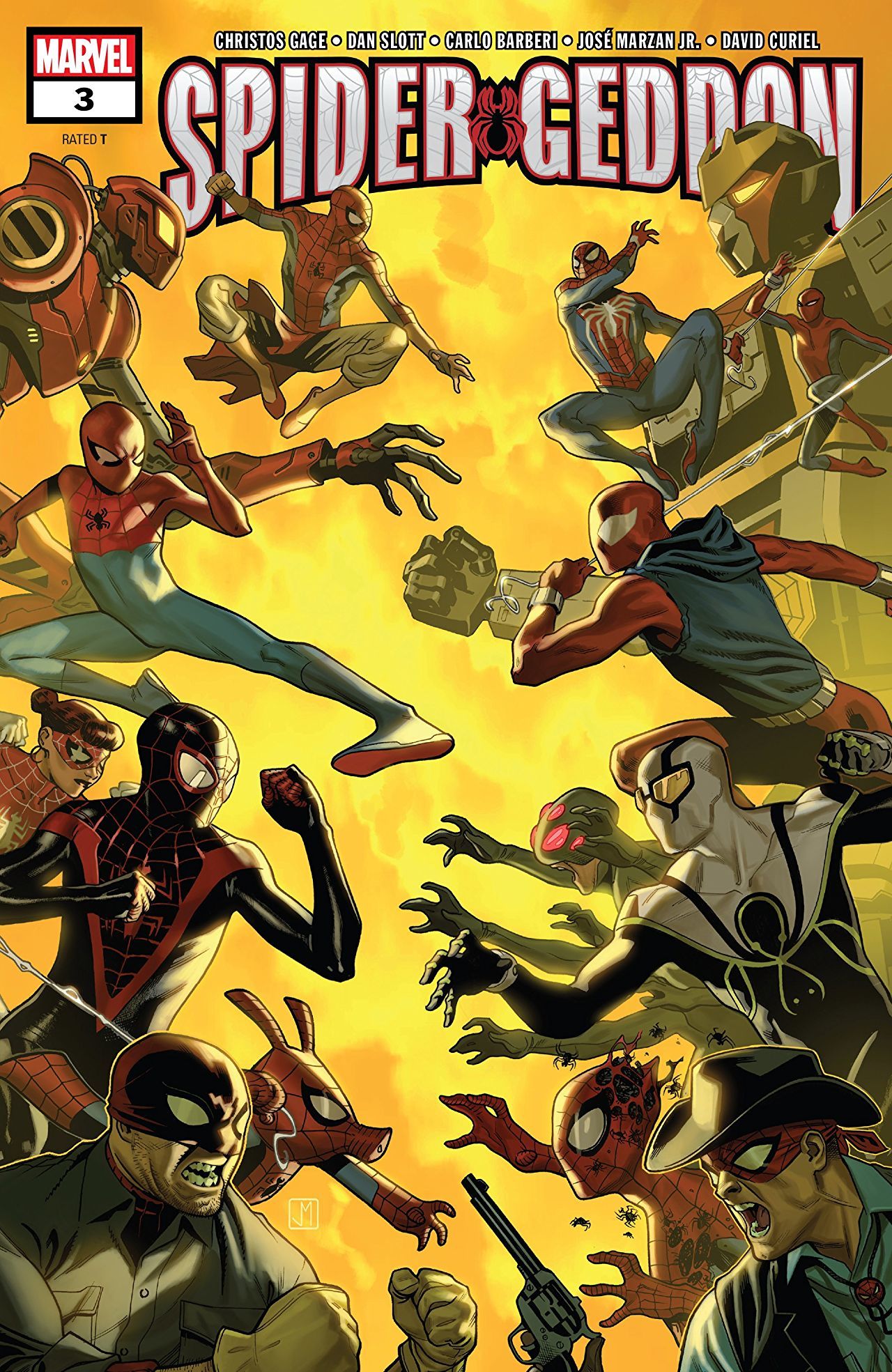 Two Spider-teams, a whole lot of different personalities. Three issue into Spider-Geddon and the spiders go on the offensive. Have you ever had those co-workers who just so damn difficult to deal with despite trying to get the same shit done? Well, that’s the best way to explain the dynamic between Team Otto and Team Miles. Two groups basically arguing about doing the same damn thing. The hate is real.

However, Miles’ team needs to get it together. While good-natured at heart, you can see that they are the less organized side of the Spiders. The kid is doing his best to play the role of leader but it’s not as easy as it seems. The events of this issue are going to make it hard for the others to follow him instead of Otto.

While Miles’ team features some pretty great new recruits – I have a certain fondness for Spider-Ben and Petey- it’s Team Otto that stands out this issue. Otto has obviously recruited some of the more hardened Spider-men and women who are willing to get the job done as far as ending the Inheritors once and for all. However, in doing so, he has recruited a bunch of wild cards. 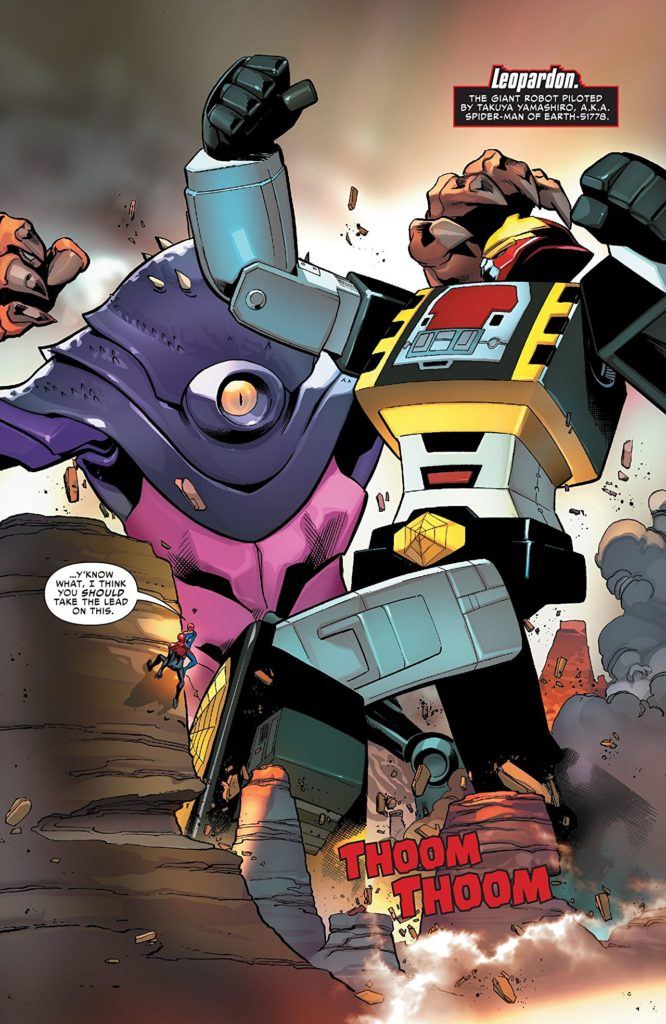 Among Otto’s recruits are the resident super sentai Spider-man Takuya Yamashiro – along with his fantastically extravagant and ill-named mecha Leopardon – and Spider-man PS4. You can tell that Christos Gage has a lot of fun writing Takuya, as well as making fun of some more formulaic tropes of most Sentai series. It’s a bit weird to see Spider-Man PS4 join Otto’s team though.

If you’ve played the recent PS4 game, it’s hard to imagine he’s down for killing the Inheritors. One has to wonder if his good nature will play a role down the line, either cause some friction between him and Otto or causing him to switch to Team Miles. Either way he a welcome addition and probably the only Spider-man on Otto’s team with a sense of humor. 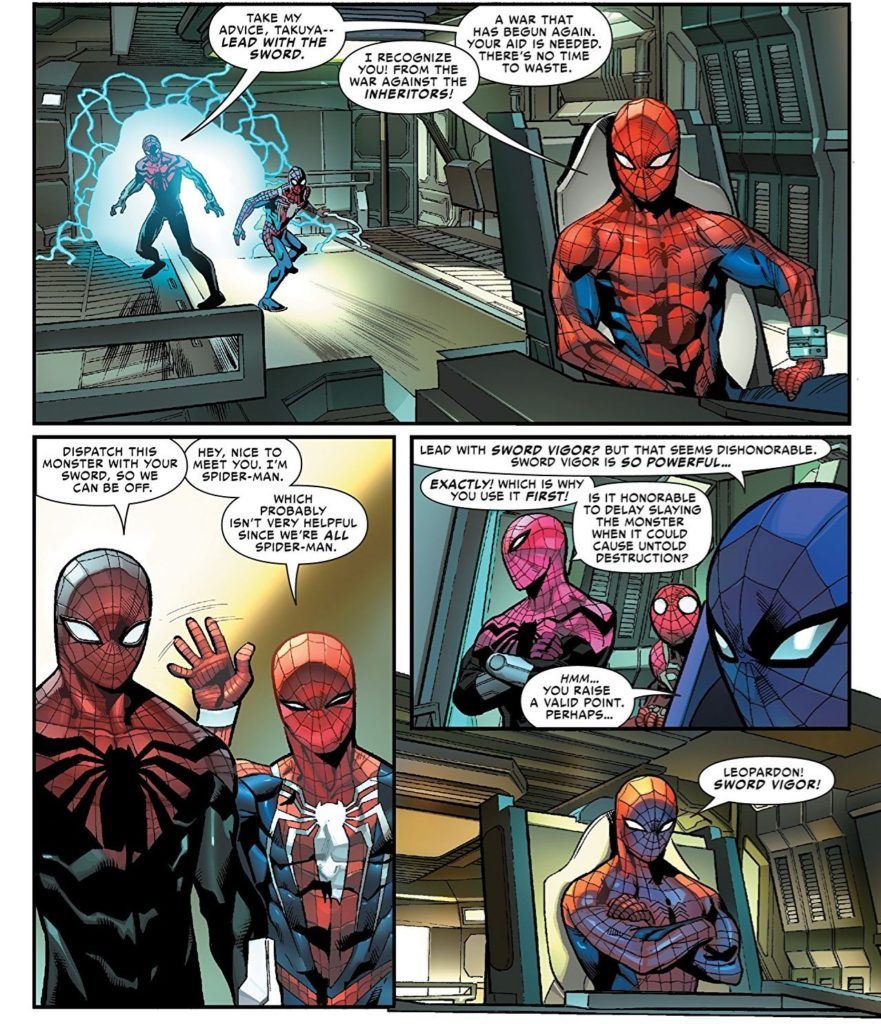 Otto’s other recruits are the ones to look about for though, which include:

No matter what universe it is, there is always a 90 percent chance that it’s Norman Osborn will be an evil, psychopathic megalomaniac. If you’ve read Edge of Spider-Geddon #4, then you know that the same is the case for this one and he’s sure to cause some trouble down the line. With another fun issue of Spider-Geddon in the books, we’ll just have to wait and see how it plays out down the line.