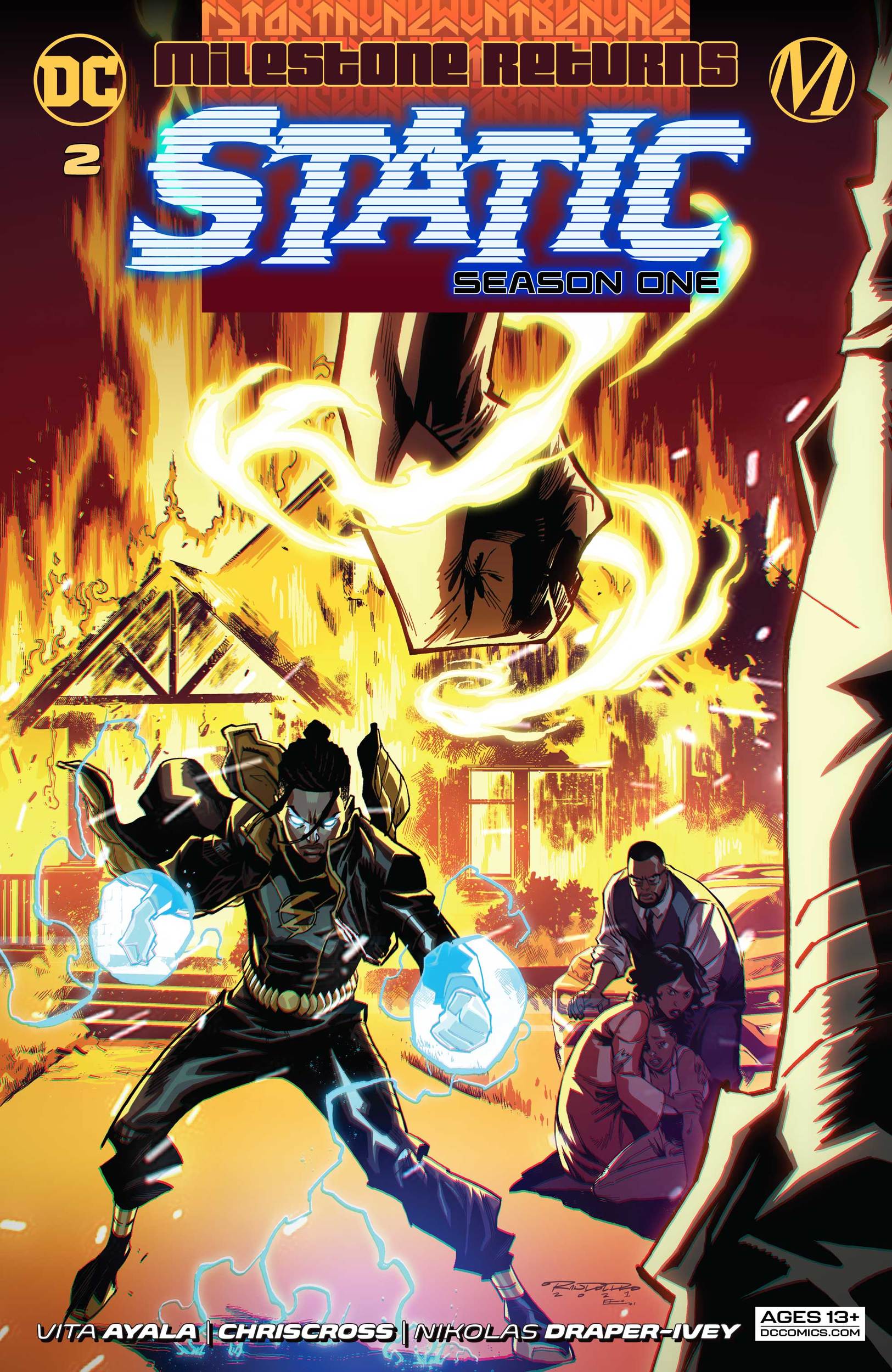 Static #2 provides some breathing room for characters and audience alike after a debut issue filled to the brim with action.

But don’t worry, we still got lots of action. In fact, the issue opens up during the aftermath of Hot Streak setting Virgil’s house on fire. The whole neighborhood is outside listening to a wannabe Black white boy screaming obscenities, and all eyes are on Virgil. He saves his house, then gets in a quick rematch with Hot Streak. All is good.

Except now his family and all his neighbors know that he’s a Bang Baby.

I like secret identities as much as the next guy, but sometimes, maybe all the time, they are an unnecessary impediment for our heroes. There are pros and cons to being private or being out in the open. But what I really like about Static is that while he isn’t telling everyone that he meets, he also isn’t breaking his back trying to hide it. He’s somewhere in the middle.

It does cause some problems for him, though. It creates a rift within his family. His parents don’t agree with each other on how to handle this new development, and his friend from school pressures Virgil to tell everyone who he is after his initial fight with Hot Streak in the Milestone #0 issue.

Everyone has an opinion on what Virgil should do but no one is considering what Virgil wants.

Ayala really sits in this and allows Virgil to grapple with the severity of his powers and what he should do with them, while acknowledging that everyone is getting on his last nerve. We’re seeing this kid yank his own agency out of thin air.

Another strong moment in Static #2 was Virgil reaching out to Curtis Metcalf, aka Hardware, for help. He’s a brilliant inventor and academic mentor to Virgil. I liked this scene for two reasons. It gives a little nod to the short-lived Static Shock comic from about a decade ago where he was being mentored by Hardware, and it also sets up the greater Dakotaverse. Hardware is going to have his own series soon too, and we get a little peek into how that might start when he’s talking to Static. Again, major props to Vita Ayala for weaving that in with relative ease.

I’d be doing a disservice to this review if I didn’t mention Nikolas Draper-Ivey. For Static #2, I want to focus on the colors. I really liked how he used them to reflect the mood between Virgil and his parents while they were figuring out how to manage his powers. There’s a lot of grayish blues and amber oranges. For most of the scene, the parents are in the dark, indicating that they don’t have the answers, and the light begins to shine on them as things get heated in their conversation. It reminds me a lot of how film noir uses light to convey similar moods. It was really effective here.