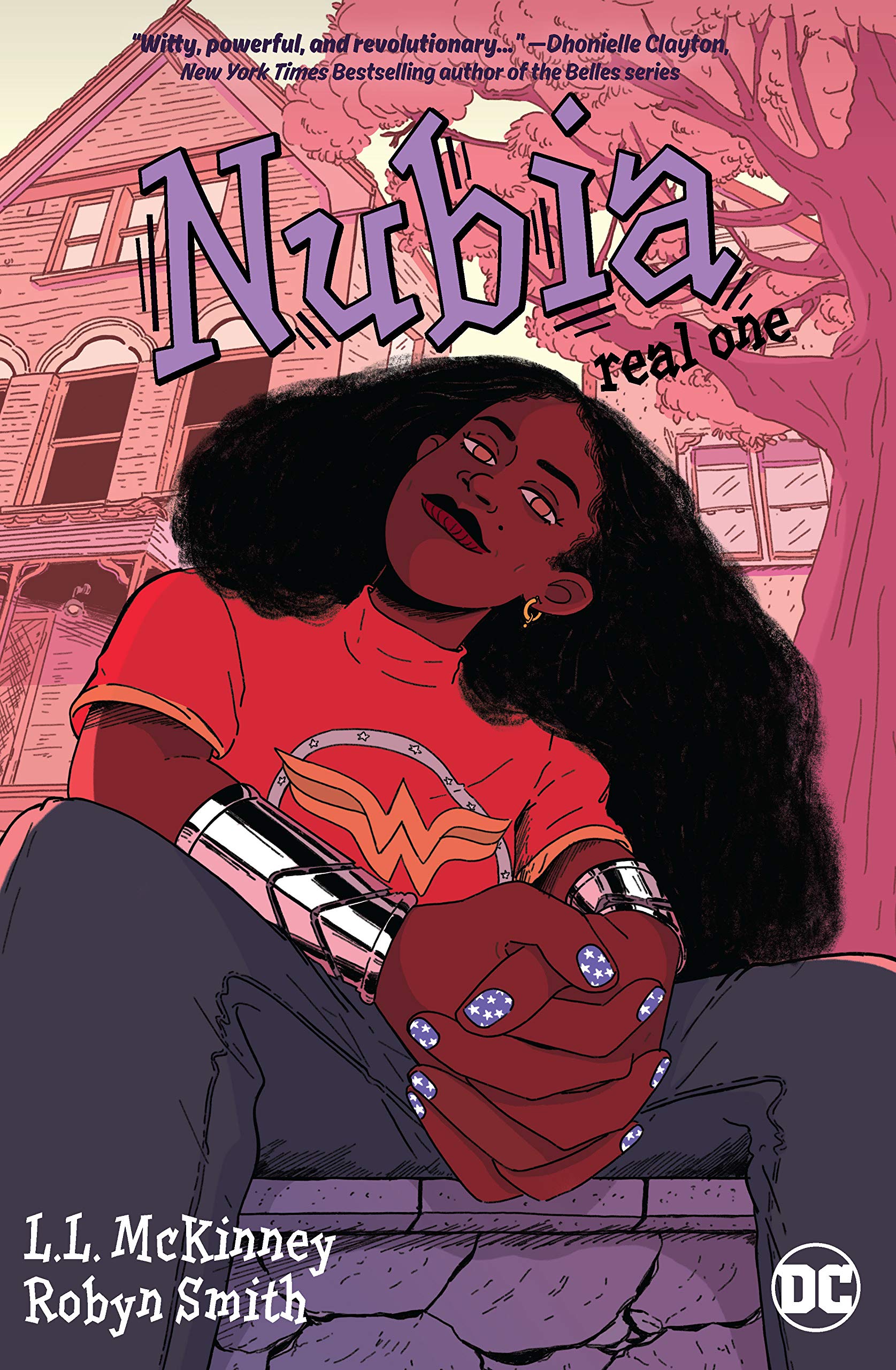 Too often in popular media and especially in the world of literature, via comics and graphic novels, mothers are glaringly absent. It is a depressing observation on my end as I always look for them, especially the mothers of Black characters. This is a work that goes beyond the scope of a simple editorial. Alas every journey starts with one step. Here I choose to start small and explore two women from one of my favorite graphic novels that feature incredible women who are the mothers of the main character in Nubia: Real One.

These women are named, thankfully. They are not dead before the start of either book and neither are they killed off in the name of plot advancement in either graphic novel. As supporting characters, these women have voices, agency, flaws and secrets, even. These mamas show us a glimpse of Black motherhood that is not always seen or even accessible in comics. It is perhaps only in recent years for more mainstream publishers and audiences that we begin to see this type of Black motherhood.

Note: This editorial will explore the women who are the mothers of the main characters of Nubia: Real One. Please know that while I do not spoil the entirety of the graphic novel, certain details are revealed and elaborated on. To avoid any spoilers, please consider reading the book and returning to read if this caught your eye!

Nubia: Real One is a graphic novel aimed for the young adult audiences published through DC Comics centering the adventures of teenage Nubia, Wonder Woman’s twin sister. Author L.L. McKinney (A Blade So Black trilogy) and artist Robyn Smith (Wash Day) teamed up to bring a fresh spin to an older comic book character who has been on the sidelines for too long. A widely misunderstood woman, seen as a disrupter, rival and challenger to her twin sister, Wonder Woman, this graphic novel presents an awkward teen and absolutely loveable high schooler figuring out who she is in the times of Black Lives Matter, hypervigilance due to police brutality, and school shooters. The narrative threads connecting this young Black woman’s heroic efforts to living in a world that doesn’t always see her as a whole person, much less a hero worthy help, makes this book a worthy addition to any library.

Teenage Nubia has a family unit that I can’t say that I saw too often in comics or graphic novels growing up. Instead of a nuclear family unit of a mother, father and child, her parents are two women, and I can’t be happier to see it. Danielle and Amera are her brilliant and fiercely loving moms who bring double the discipline but also double the heart as a tag team. Families such as these do exist, and Black and Brown women deserve to see themselves on the page represented as mothers and parents in households they lead with the children they raise and love. In that same breath, as do their offspring.

The real kicker, plot wise, that took me by surprise in such a pleasant way was the reveal that one of Nubia’s moms once hailed from the island of Themyscira. As a former Amazon under the rule of Wonder Woman, Amera found love with a woman from the world of man and left her life on the island behind her. With the love of her life, they saw a baby Nubia in need and stepped up to raise her as their own. Two queer women took up arms of another kind to raise a Black girl child in a unforgiving world where girls and women aren’t given the same protections and importance as they would be in the land of their Amazonian sisters. Their mission to raise Nubia and keep her safe is marked by layers:  due to her skin color, they know their daughter won’t be welcomed, respected, protected, or cherished everywhere. There are those who are eager to paint a target on her back. Gleeful, even since she’s a young woman. Thanks misogynoir! Throw in her super powered strength and her family heritage and relation to a certain superhero that ruffles feathers and challenges gender stereotypes everywhere she goes–that has been kept a secret-makes the target on her back even bigger.

To be clear, there are several really tough scenes and panels throughout Nubia: Real One: some involving interactions with police officers. (See some trigger warnings at the end of our site’s review here) In the earliest chapter of the graphic novel, there is a police officer who places young Nubia in handcuffs, deeming her suspicious. He then drives her home, still sitting in the backseat of the car handcuffed. When she gets home, she is in tears–the interaction with the police officer has left her emotionally devastated: before speaking with him she had stopped a burglary when out with friends, and acted on using her super strength, potentially exposing her secret identity and her beloved parents. The cashier at the store mistakenly assumes Nubia to be one of the burglars and adds her description to the cops after Nubia leaves the scene, even at the behest of the witnesses there, a schoolmate of Nubia’s.

Upon that, she encounters a person of authority who does not make her feel safe, decides that she’s suspicious, and makes her feel like a criminal by handcuffing her. He doesn’t call her parents. Upon seeing her in distress, he does not comfort her or do any type of damage control by offering resources. Nubia enters her home in tears and her mothers soon bumrush her, embracing her, and loving on her. Once the story is out, they are angry. Enraged and wanting justice for how their child was handled, they are furious at how their Black child was treated.

“We’re with you, always” – Mama Danielle

“…You are perfect, Nubia, exactly as you are. The rest of the world is broken. Not you. Never you…” – Mama Amera

In an interview about the graphic novel with CBR, Author L.L. McKinney mentioned relationships of Black girls and women as one of the biggest takeaways that she wanted readers to walk away with after reading: “…I wanted to show that we deserve to be loved and supported and protected and defended. Nubia’s moms are willing to upend their entire lives repeatedly if it means keeping their baby safe…” As moms, Danielle and Mera are quick with affection as are they also quick with a disciplining word. Nubia may be called out on talking back or going to parties when grounded but she’s still loved, still called down to the table for dinner, and still comforted. Most importantly, she is still their child and they never let her forget that through the thick and thin.

My favorite set of panels in the latter half of the book are of Danielle grabbing her daughter as she’s off to a local protest for a slain black teenager, who was killed by police officers. Amera holds her tight after reminding her of safety tips for attending a protest (most helpful when you’re a activist from a marginalized background, especially if you’re a Black one–turning off your location, having an exit strategy, and using milk, not water, in case of pepper spray) and fiercely reminds her that she is proud of Nubia.

She then stands as a united front with her wife Danielle, holding hands as they watch their little girl–now their almost adult daughter leave home to join the others at the protest to take a stand in their community. These pages are among some of the most impactful and loving scenes between Black women and their child in a comic book that have touched me and made me feel seen. The images of these Black mamas in Nubia: Real One continue to stay in my heart, a buffer against the awful things that plague living a life while being Black and woman. These panels continue to make me grateful for Black women in comics: the ones making them and the ones on the page. Author L.L. McKinney and artist Robyn Smith did a masterful job on being inspired by the women in their lives and bringing that love in creating Amera and Danielle, Nubia’s moms. Their work should definitely be the start of a masterclass on bringing Black motherhood to the page in comics and it stays an impactful and meaningful representation that should never be overlooked or forgotten.

Nubia: Real One is available where comics and most books are sold.