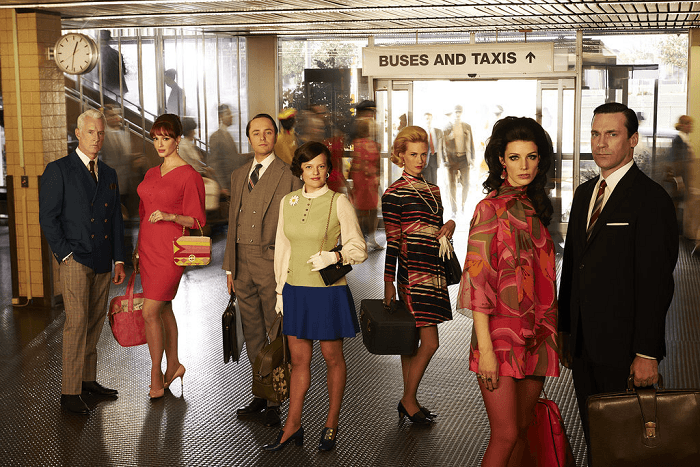 When I was still a teenager nearing my high school graduation, I remember going to (being dragged to) my father’s work functions or to dinner at the home of his colleagues. My father is a really smart man – brilliant, really – and was a chemist at, let’s say, a really large company. He had ascended into some management hierarchy where the higher he rose, the less people he saw that looked like him. There were times we would be at these large functions with a hundred plus people and there would be two, maybe three other black families. My father didn’t seem to know them. Years later, I realized they may have been at a different employment level than my father and therefore didn’t cross paths with him. It was a reaffirmation that Black folks were still “out of place” in the realm of successful business structures. That was also in the mid ’90s.

I used to watch Mad Men with two different minds: this is a really well put together show that entertains me, and this is a show that doesn’t relate to me in any way, shape or form, with no interest in doing so. For those that aren’t familiar, Mad Men is a drama of an advertising firm in New York during the 1960s (mostly). It is a rich and beautiful TV show with a great cast and almost as great writing. The costume and set design is possibly the best in TV history and it often is very true to the times. I guess. As I’ve stated before in talking about period TV shows, they almost always focus on white upper class communities. The combo of the time period and the financial class of the people being portrayed often leaves little to no air for People of Color to breathe on these shows. But let’s be honest, they aren’t really making the attempt either.

The two minds that I used to watch Mad Men has congealed into one for no other reason than it’s been on forever. Having debuted in 2007, for me Mad Men is the cool uncle that has always said problematic and privileged shit at the family gatherings, but after a while, you have just reached your breaking point and the comments he makes aren’t as cute anymore.  Counting the mid-season premiere (what a ridiculous phrase AMC, come on) we have now had 86 episodes of Mad Men (which also makes it about 20% longer than Breaking Bad, FYI) and you barely need two hands to count all the people of color that have appeared on the show. And please name a Person of Color that held any social station above an elevator operator or a secretary (there may have been a professional boxer in the early seasons, someone can clarify that for me in the comments). I used to watch Mad Men as appointment TV until I just had my fill of the unapologetic exclusion around season six, when it got relegated to DVR middle-of-the-week status. By the time season seven began, I had dropped the show altogether. Well, I am a completionist, and was still interested in how the show would end, so through the magic of Netflix I caught up this past week in time to watch the premiere of the endgame that has stretched out over the last couple of years.[quote_right]”But what does it really say to a Black viewer to watch all these characters they’ve spent years with nonchalantly shove off the King assassination? […] does Weiner and his writers have any obligation to a more global audience?”[/quote_right] Let’s also be crystal clear about something: this isn’t an oversight or omission. The demographic of Mad Men, or lack thereof, is completely intentional. The show’s creator, Matt Weiner, and his staff have been very deliberate in the story they want to tell and have been pretty unwavering in that approach. He doesn’t care about the criticisms of the show’s lack of minority representation or impact because they aren’t really part of the story he’s interested in telling. Mad Men has plenty of “taboo” topics to speak on, like the abuse/treatment of women in its environment or the sexual orientation of some of its characters. There just isn’t room for someone of color to be that important on this show. Some critics have praised Weiner for that approach, that he’s willing to tell the story he wants regardless of the pressure he receives for it being so myopic. I can’t find any Black critics saying that, however. 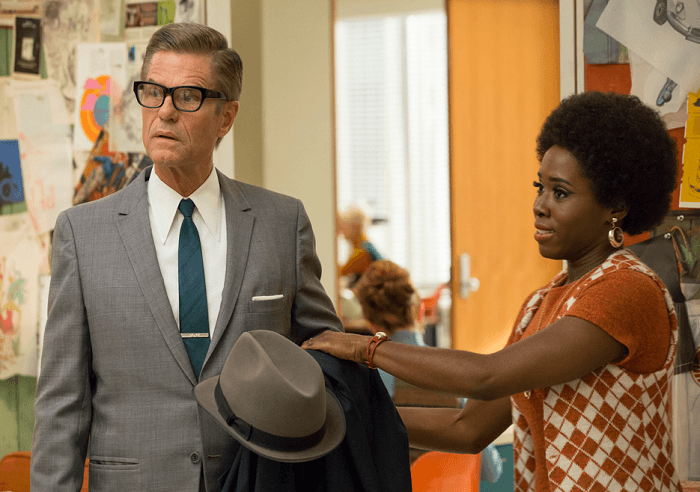 One of the things that kept me hanging onto Mad Men was the progressing timeline at work and thinking that it might lead to more (for lack of a better word) integration into the casting. The fruits of such patience resulted in a couple of Black secretaries to go with the Black maid in Betty’s household. Gee, thanks. Except for the aforementioned elevator operator and a pickup guitarist in California, there’s been more Black men married to a Kardashian than have been on a show that’s been on the air for eight years. We did get a Latino kid with a small recurring role last (half) season, but we’ll come back to that. The criticism that Weiner has gotten in regards to race on the show (for the critics that don’t completely ignore it while falling over themselves to praise him) is that Weiner handles race rather clumsily on the show when it does come up.


[divider type=”space_thin”]
The JFK episode was one of the best the show has produced as it gripped everyone on the show when it happened (the iconic moment with the Black maid sitting next to Betty on the couch while watching TV always burns in my mind). Then came the episode where everyone was at an event with the Dr. King assassination happened everyone was like, ehhhh. And maybe, scarily, that’s actually realistic, that these upper-class White folks didn’t have much investment for the life of Dr. King (LAWD, because White people LOVE Dr. King, Jr. or at least specific quotes of his now). But what does it really say to a Black viewer to watch all these characters they’ve spent years with nonchalantly shove off the King assassination? More acutely, does Weiner and his writers have any obligation to a more global audience?

Mad Men’s dealing with race, as far as a character study, has really said one thing from the show’s perspective: White people in the 1960s are horrible. From Roger’s blackface, to the treatment of the secretaries at SCDP, the racist outburst of Pete, the late Bert Cooper’s “I’m not a racist but…” dealings, and Peggy’s just overall behavior with Black folks (like when she was suspicious that Dawn might steal from her), the show has shown us just about every character has exhibited some sort of racism or racial bias over the show’s run. My problem is that they are rarely running that ideology up against anything substantial. Bert didn’t like a Black secretary at the front desk, so she got moved. Pete said horrible things in the office and eventually was made a junior partner. It’s one thing to be a showrunner and say, “Look, I’m not afraid to show that these were horrible people for the way they treated People of Color,” but when it never counts for anything happening, then it becomes very hollow.

Look, everyone! A Black person! #MadMen

And yet, here I am, talking about Mad Men. The show is aimed at me as a lover of good TV in its framework and construction. The show is definitely not aimed at me for any other reason. And I’m sure most think the first reason is the only reason that matters, but when you haven’t mattered in media for so long, it becomes a lot harder to ignore for you, than it does for people that never had to worry about representation before. So, I’m here for the end. I’ll tune in for these last six Sundays. I’ll count the number of People of Color I see in those episodes as well, while determining if they have any significance. It’s a show being heralded as one of the best of all time, what does it matter if I wasn’t invited to watch it or not?