Two Dope Boys and A Comic Book: House of X

***It’s been a while, specifically on a comic book. But that Hickman House of X #4 just hit different. Omar Holmon and William Evans had to schedule some time in the Danger Room and work this shit out. My mutants, shit might never be the same. All the Spoilers for House of X so far***

William: Nah man. Naaaaah man. I wasn’t ready. Like, I knew what *could* be coming, but my ass was not ready my Mutant. I don’t even know where to begin. Maybe the beginning. Or like, before the beginning, before the tears and shit. What you think the X-Men were listening to in the Blackbird on the way to the Mother Mold man? I’m guessing Scott “Whatever it Fucking Takes” Summers grabbed the Aux Cord and put that Dreams and Nightmares on as they entered the orbit. Just the thought of that piano playing on their approach got me shook man.

In a way, this is what Scott’s whole fuckin’ existence been leading up to man. Taking a fucking X-Men Assault Team, let’s not mistake what this was, the gotdamn Navy Seals of forward assaulting ass mutants on a suicide trip. This shit was best/worst case scenario Mass Effect 2 going through the Omega Relay. I can’t. I done read this issue twice and I still can’t.

Omar: “Push me to the edge, all my X-Men dead!” The foreshadowing for this shit coming down to the Stringer Bell (Read: “The Wire”) was Magneto an issue ago telling these mutants the odds for this mission were impossible. Scottie “5 Beams A Day For 3” Summers asked’em “My mutant. Does it need to be done?” Charles Xavier nodded like, “You already know”. Scott told them with utter fucking disgust:

You Marvel fans don’t hear me tho, My mutant Cyclops put a blue bandanna on the steering column of the Black Bird jet, looked at the team and said, “I’m getting rid of these muthafuckas tomorrow… X-Men in 3.”

The mission was supposed to be In and Out Burger, baby. They was supposed to order the fade, pull up to the drive-thru window, catch it, then be home in time for This is Us. But these hatin’ ass humans straight blew a whole ass hole blown in their hull. Xavier calling collect via a psychic link to see what’s what and saw the Black Bird’s paint job is fucked up now, you can’t blot that out. Husk and Angel dead. Laid out and folded like ya momma’s church crown and Sunday best. Xavier lookin’ around like, “This the right channel? Aye, who keeps thinking about Apollo 13?! You messing up the link. Oh shit, Jean? This live?! Gaaaaaw Dayuuuuum!” 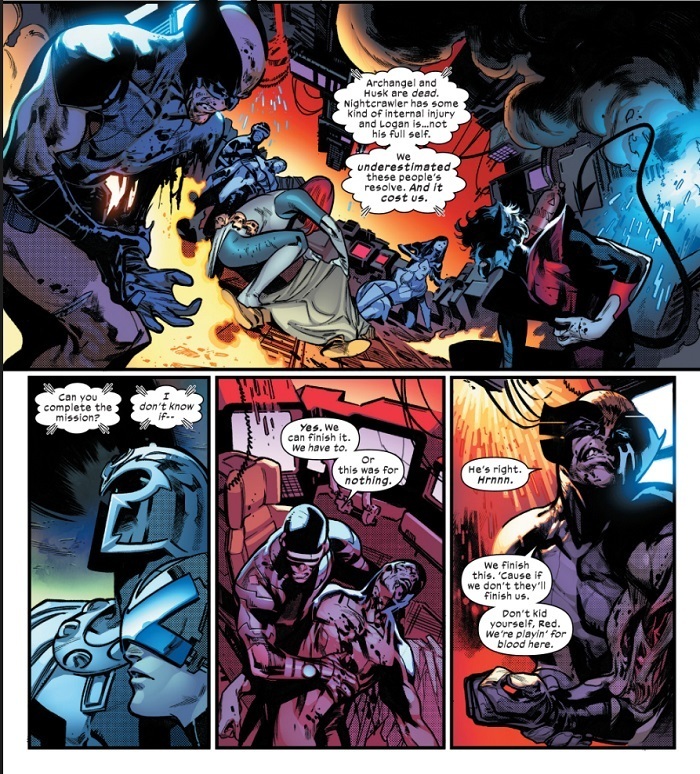 William: That’s when I knew fam. When they said Angel is dead, I was like sheeeeeiiiiit Hickman came in like Thor except he went for the head the first time. All these muthafuckas might die. How you gonna start the issue that way? Previously on House of X: Angel and Husk dead as fuck. I say gawwww dayuuuuum. But this X-Men team man, you hate to see it but they make a mutant proud man. Nightcrawler’s internal plumbing all fucked up and they done stripped Wolverine down to the white adamantium meat.

Speaking of which (and we’ll get to the big shit later) but I know folks have been tired of Wolverine’s undying ass for the last year. They done killed and rebooted this man more than Spider-Man films in the last decade. Wolverine is an example that cancel culture don’t really exist, nahmean? But he earned all the accolades this issue man. My dude said, “Don’t kid yourself Red, we’re playing for blood here.” Logan said let them bodies hit the floor and leave that soft shit in the burning Black Bird fam. 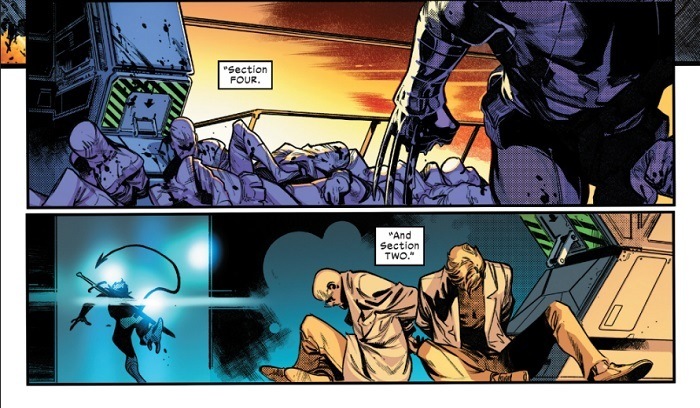 Omar: Wolverine said, “Just so were all clear. I’m running up in this Star Ship Enterprise knockoff and stabbing everybody. I’m talking Red Shirts, Blue Shirts, Yellow shirts, Administration, HR, Payroll, Legal, Cafeteria workers, Maintenance, and IT tech support. I don’t give a fuck if it’s “take your kid to work” day today either. Snikt. Fucking. Snikt. Feel me?” There’s 5 minutes left on the clock, no time outs, and two benched players. What you goin’ do Cyclops?! He had the team go for the Phil Jackson full-court press. Nightcrawler teleported them to 4 different points to fuck up the Mother Mold. Did that shit while his insides were straight cranberry juice. My mutant coughin’ up that Ocean Spray and still put 8 points on the board securing his section on some ‘88 Isiah Thomas dropping 25 with a sprained ankle. Section 2 closed. Wolverine *counts bodies he killed* 14 points. Section 4 closed.

We got humans coming for Marvel Girl and Monet? Maaaaan, Monet threw J. Jean in the escape pod, said, “keep the channel open while I draw these fouls”. Monet took out the Allen Iverson braids when she transformed and made it a Hot Girl Mutant Summer in space where no one could hear these muhfuckas’s knees scream and buckle. 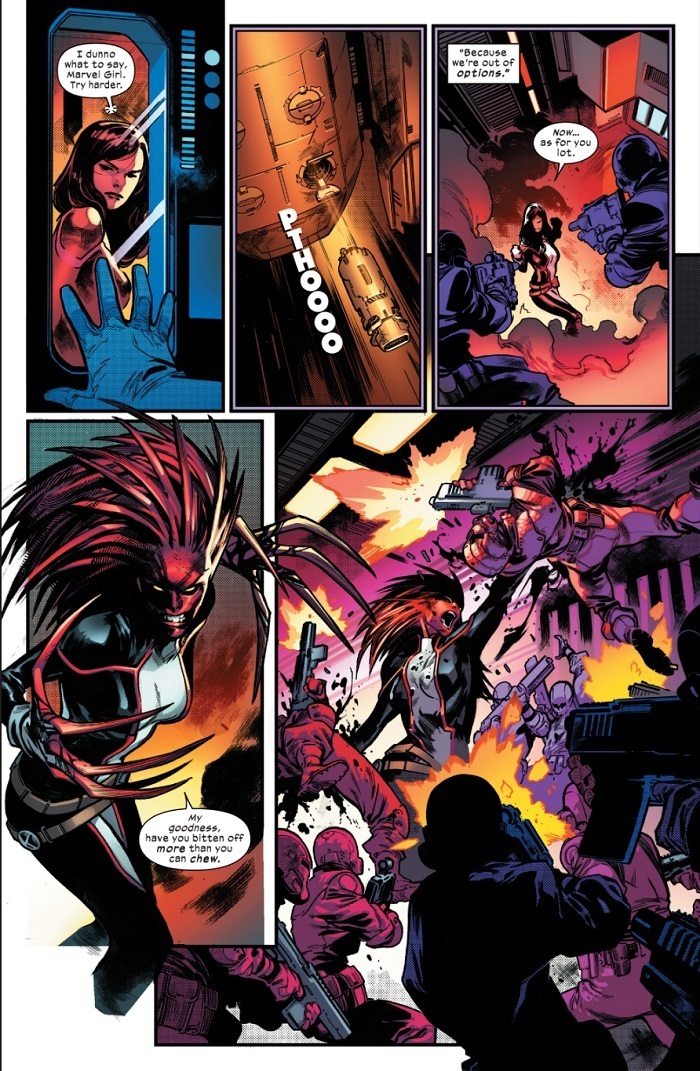 William: The Monet exit?!? My gawd. Bury her a fuckin’ G. I don’t know what to say Marvel Girl, try harder. Bast. She went straight Blanka on that crew, man. I knew she wasn’t gonna survive it but still, that’s the Doc Holiday outro right there…

…unlike Mystique, who looked like one of the seven hundred ways that the movie Gravity could’ve ended if Sandy B failed her mission. Mystique got that Grodd in Justice League Unlimited treatment. Dr. Gregor said don’t let the space freeze you where the good Lord split you. Man, House of X came out three days ago and Mystique still drifting through space. She a satellite now fam. They bouncing Direct TV off her. 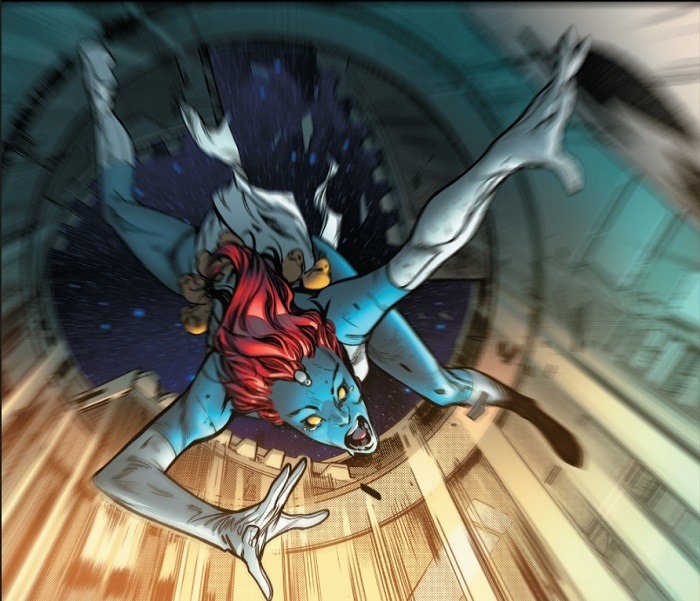 I feel like we should mention back on Krakoa where everyone watching Jean emote the terror via the psychic Storm-Water Summer Jam screen. This was like those Super Bowl parties where the home team blows a twenty point lead. Hank probably burned his X-Men jersey and crying in the shower with a bunch of empty beer cans at his feet. 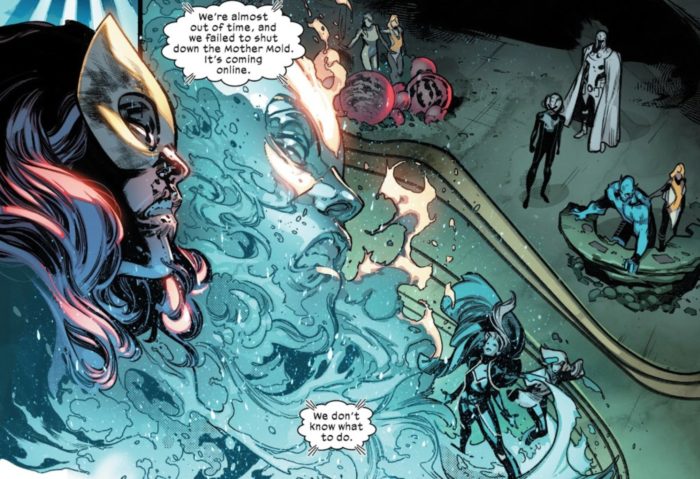 Omar: Meanwhile, Dr. Gregor said fuck beta testing and brought Master Mold online early. Whole block heard that advanced 56k modem dial-up get fired up and knew the game was all fucked up now. Charles Xavier heard that Mother Mold computers get the putin and told his children, my fault, his Children of the Atom, his #1 draft pick, ‘63 and ‘75 Dream Team members… “Do whatever [the fuck] it takes”.

As a former athlete, when your coach says, “Do whatever the fuck it takes”? Your only option is greatness. No excuses. No apologies. Thas it. Scott “optic blast ya whole block” Summers was looking out that window thinking nothing but Dido lyrics (My tea’s gone cold, I’m wondering why I got out of bed at all) when the MVP Nightcrawler said, “We can get there” (The morning rain clouds up my window, and I can’t see at all) Wolverine told his mutant “ain’t no other way Slim…” Scott, forearm against the glass, seeing nothing but red, dead, and a chance at redemption told his people’s their last marching orders… “Go”. 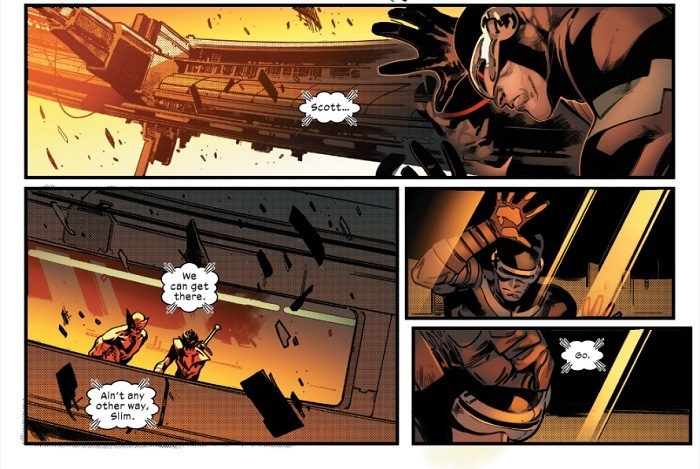 But it is that bad Dido cause this is X-men Black Ops, baby. SOMEBODY GOTS TO FUCKING GO! Nightcrawler and Wolverine about to teleport into space in front of a fucking sun to destroy a literal mother of all sentinels. Ain’t no happy endings here. The days of the future done past right here, fam. Right before the quantum leap Wolverine asked Nightcrawler if there’s a spot in heaven where thugs get in free you gotta be a G. Nightcrawler told his mans and dem for the past 44 years, I’ll have the spliff waiting for you on the other side my guy. *screams at how fucking good this shit is* 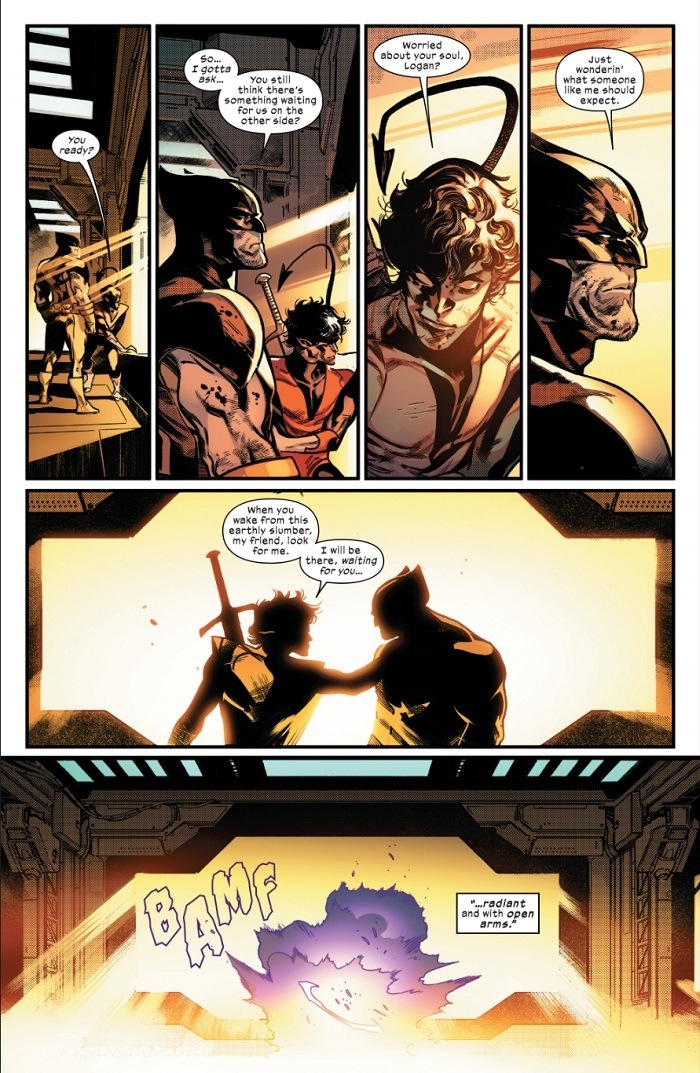 William: “The Bravest Man I know.” The fucking respect! For Scott to say that about Logan…nah man, there are fucking Tetris Levels to this. Arrrgghhh. AND WE THOUGHT THAT SHIT WAS OVER.

Scott acting like he lost the platoon but won the war. Your boy really thought he was about to find a super-suit in storage and reverse eye blast his way to the escape pod. *Cries in nanites collecting at the base of my skull* I mean, fuck warm-bloods in general and humans specifically, but you gotta respect Dr. Gregor’s level of savage. Scott tried to tell her that the Mold is a shooting star now, so he’s worthless as a hostage. Dr. Gregor aimed the pump-action and was like, nah, you just worthless.

We way late on this, but shoutout to Pepe Larraz and Marte Gracia. This whole fuckin’ issue slaps in the visuals, but that Dr. Gregor reflection in the mutant formerly known as alive, known as Cyclops? Chef’s fucking kiss* (translated from pretty damn great when you need to lead up to a muthafucka getting their head blown off).

And through all that. THROUGH ALL THAT. Jean dying alone at the hands of about 4 sentinels in space might have been the most tragic. Fuck man. Storm dropped that water then dropped down in the prayer formation cuz that’s the only thing she got to whip up now. Some prayer for the souls of them X-Cats.

Omar: *lifts head from hands* Hickman is…. Hickman really is, yo. Hickman is giving us Mutants in the Hood. Cyclops hit the corner and got that click-clack, bla-ow. All I heard was Cuba Gooding Junior yellin, Scooooooottieeeee. I legit don’t even have the words. Charles Xavier hit an ill soliloquy in the aftermath when them X-Men got X’d. “Look what they’ve done… what they always do. Look at how this always ends. With fire. With death. And funerals of our children.” 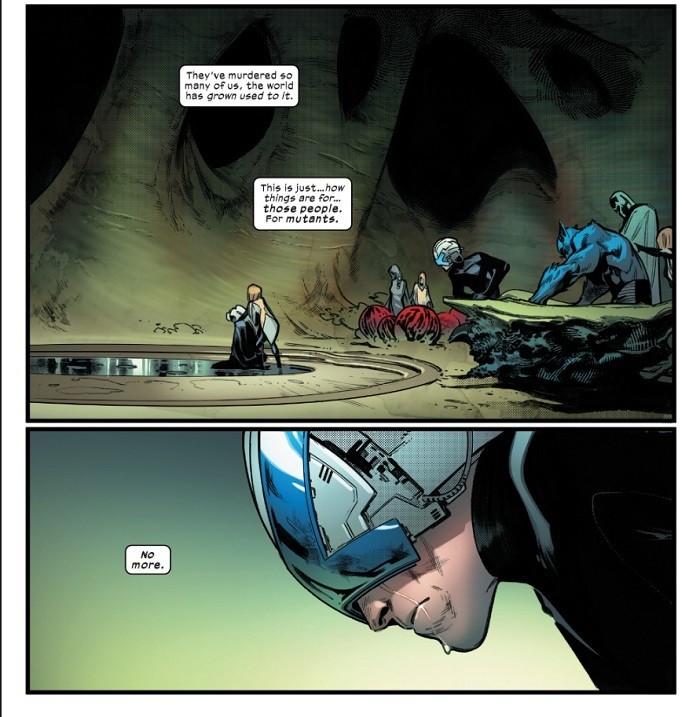 I dunno about yall but I heard that shit in the voice of Danny Glover holding 20-year-old scotch while staring out into his backyard. Maaaaan, when that X-Men talk start sounding like the Black experience in ‘Murica? Woooooooooo. I mean I’m sure Storm/Bishop given a soliloquy of that effect mad times. Xavier just saying it outloud now but I digress.

Look, I don’t know what’s about to happen but I do know that we are now in the end game. All I know is Xavier and Magneto bout to go student loans on humanity. They goin’ be making mad house calls cause there is a debt that must be paid. I need to know how I can show I am a mutant ally cause I want no parts of that smoke, bonfire, hell or highwater Xavier bout to bring. Yall gotta a safety pin I can rock? There a form a normie can fill out?! Lemme know.