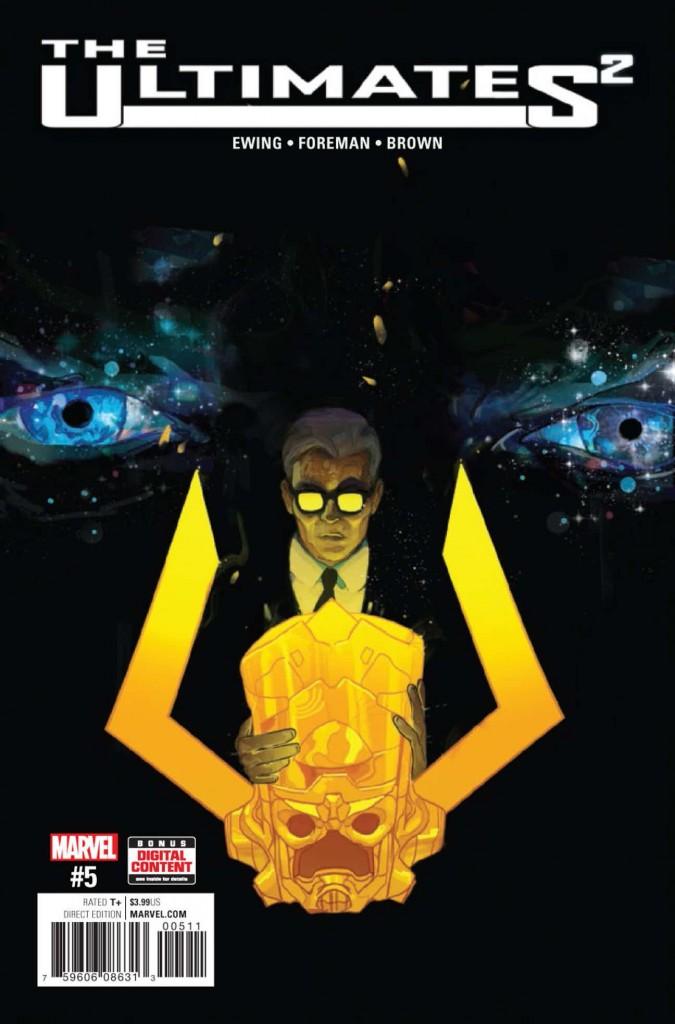 This issue is nothing but fucking bars. I repeat: this fucking issue is nothing but bars. I’m talking Kit-Kats, jail cells, barbells, ice cream bars, muh fucking high jump bars, pole vault bars sitting at a smooth fourteen feet and six inches. Al Ewing giving us serfs poetry, Travel Foreman out here painting beautiful imagery. “THE SCENERY WAS AMAZIN!”. Oh my god, I’m sorry but I gotta talk my shit ’cause I wasn’t expecting this. This is how a comic is supposed to make you fucking feel. This is the shit I’m talking ’bout. This is the shit I’m trying to see up in my panels.

Listen, The Ultimates were lined up against The Troubleshooters last issue and they were a perfect match for this team. Every member was facing someone that trumped their power, there was no God Mode for Monica Rambeau. T’Challa got stripped out his damn suit down to his fucking speedo b. Blue Marvel in another dimension fighting a muh fucker so power they damn near a deity. Y’all don’t under fucking stand what I’m telling you. Ewing and Foreman gave us The Raid last issue and this fight sequence was The Raid 2. What’s so beautiful about this issue is that we are getting action but Ewing is careful to not waste that action or dilute it to just fist fighting. Everybody on the Ultimates moves, thinks, or operates in a certain manner to create openings and opportunities to try and get the upper hand. This at times doesn’t even involve being physical. 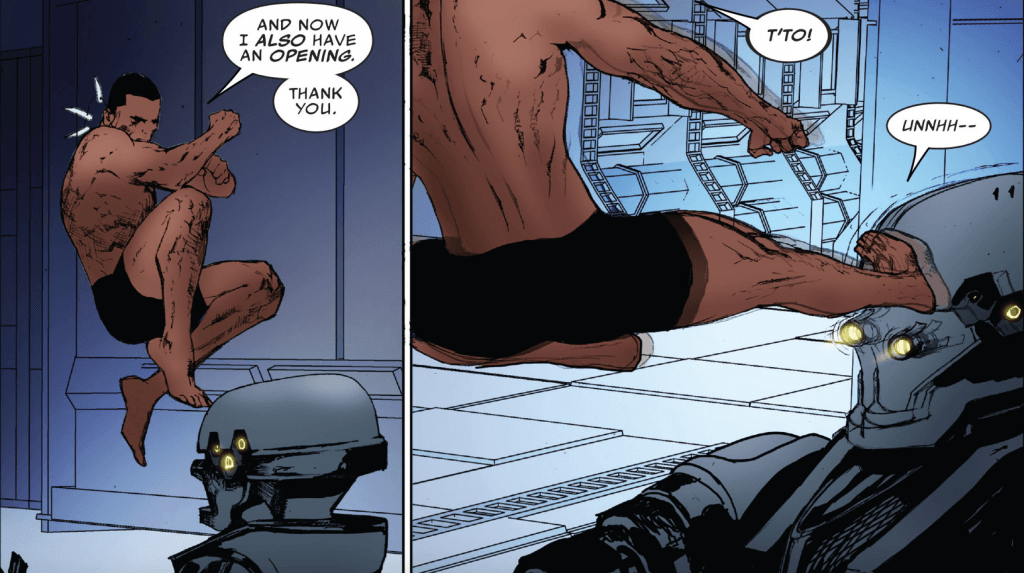 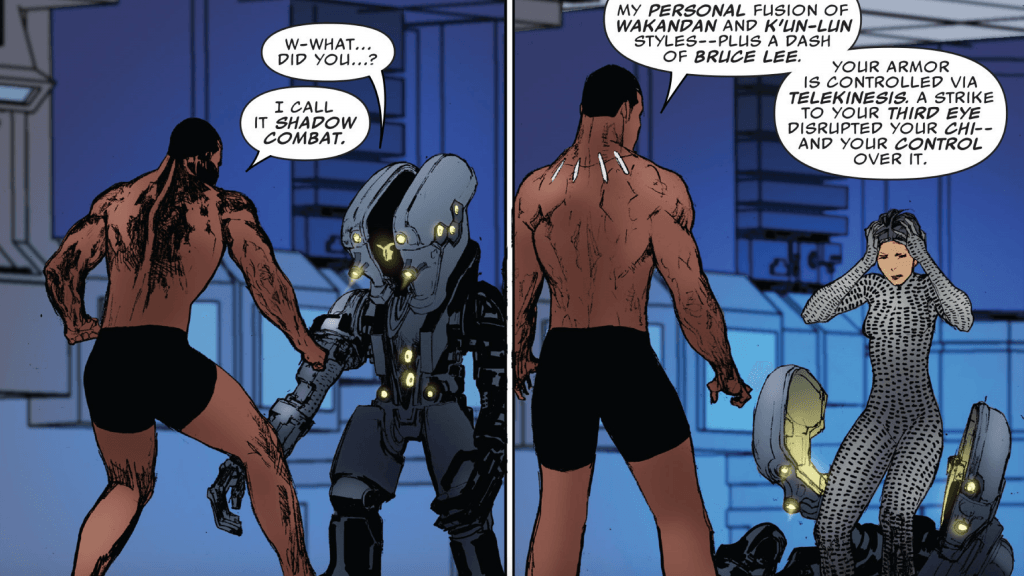 Meanwhile, they frienemies and them, Connor Sims bleeding out on the floor as all this action is taking place. I can’t stress enough how dire shit as gotten on so many scales. Ewing also gives a look into the Command Leader of the Troubleshooters, Philip Vogt. We get a glimpse into his past and discover his ties to Tensen and a mission that left him changed. The extent of that change we do not know, however, we do know he’s concentrating hard on his actions in how he has The Troubleshooters moving. Philip was lurking for dumb long but Ewing is giving us the impression that dude isn’t evil, he’s really just trying to be about the checks and balances. Ewing got a Government man actually trying to make the world a better place and do his job? Thaaaaaaaaat’s a stretch there homie, I’ll accept a woman being a physical form of light, and a team traveling outside of space and reality but a government official that’s not on the fuck shit? C’mon, son.

You know what, for you Al Ewing I’ll take that shit. Ewing out here writing characters of color and flexing on mother fuckers and staying away from problematic soap boxes with these characters too? My man just here to do beautiful character development too? No respectability politics or iterations of Black pain to get a point across? I see you, Ewing. Four comic volumes in with different iterations of characters of color at the helm getting that world building. I see you and I phux with you and that lane you staying in Ewing. 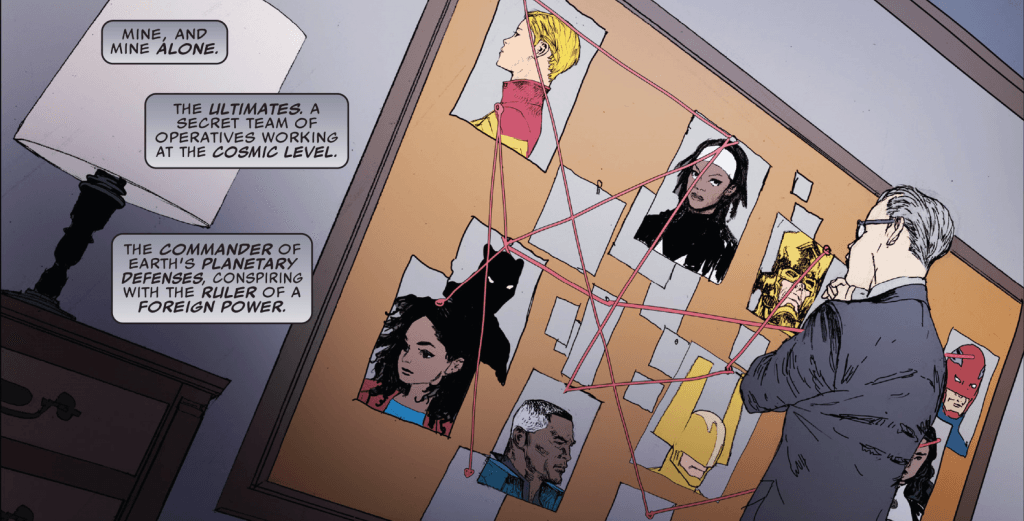 Travel Foreman I see you too, giving me them good ass gritty fight scenes and facial expressions in the midst of a war. Listen, that fucking panel with T’Challa had me shouting “Black Panther the illest muh fucka (fictionally) alive.” Foreman did such an incredible job of navigating us between fights and having them spill over into other team members fighting. I loved this, this shit was a fucking science and all the attention is in the little details. Monica’s face before she went in on’em, the look of shock on Troubleshooters that got bested. Foreman brought this issue together, plus that page with Galactus? Yes. A thousand times yes. That’s the shit I want from my comic book. That’s the shit I’m trying to see in from a creative team writing my faves.

I’m writing this review at 12:39 am and the amount of hype it has me in is really ridiculous. I’m really feeling this book so much, this team really took these characters to a new plateau. There’s so much universe building Ewing does with calling to old old ooooold cosmic characters and then expanding that in present day with Foreman riding shotgun and giving us an incredible gritty scale of all these universal happenings. Listen, The Ultimates 2 is the CNN of the cosmos reporting in on what’s going on and it’s a straight up war zone right now. Y’all better put respeck on this book’s name and creative team.

10 All Black Everything Speedos out of 10